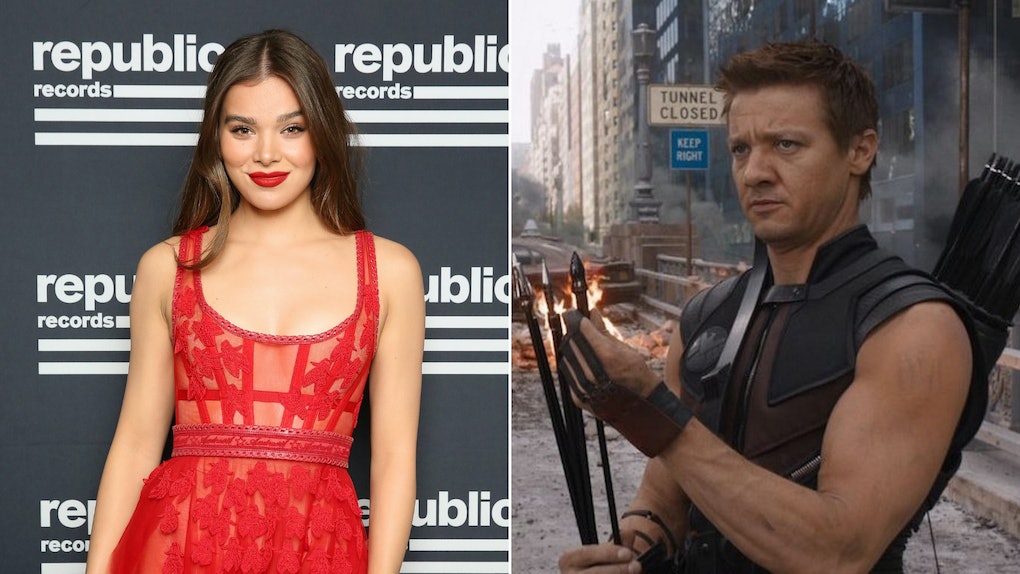 Hailee Steinfeld Might Be Marvel's Next Hawkeye, So Get Ready For A Change

Jeremy Renner may be passing on Hawkeye's bow and arrows pretty soon, and now fans have a good idea of who will likely be taking his place as the Marvel Cinematic Universe's new sharpshooter. One of the several new Marvel shows that will premiere on Disney's new streaming service Disney+, Hawkeye will center on Clint Barton training a woman named Kate Bishop to take up the Hawkeye mantle. According to Variety, Marvel has offered Hailee Steinfeld the lead role in the show, so Hailee Steinfeld might be Marvel's next Hawkeye. Although the casting is still not official, it sounds like Steinfeld could be picking up the bow and arrows very soon.

Of course, the character of Hawkeye has been a staple in the Marvel Cinematic Universe since the first Avengers movie back in 2012. As one of the original six Avengers, Clint Barton has appeared in multiple movies over the past seven years, most recently going rogue and nearly sacrificing himself for the Soul Stone in Avengers: Endgame. With the way his arc in Endgame turned out, it is not hard to imagine why Barton might want to step away from the superhero game to instead spend more time with his family. So, his upcoming standalone series Hawkeye will focus on Barton training a successor, Kate Bishop, to take his place as the new hero.

In the Marvel Comics, Kate Bishop is a woman skilled in combat and marksmanship who becomes the leader of the Young Avengers. Because of her fearlessness, she is encouraged by Jessica Jones and Captain America to take the name Hawkeye in honor of Clint Barton, who is assumed dead at the time. Later, Bishop discovers Barton is actually still alive, and he becomes a mentor to her, even allowing her to take his bow and his superhero name.

Although not much is known about Disney+'s Hawkeye series, it is clear Kate Bishop will play a major part in it. Jeremy Renner is set to reprise his role as Clint Barton, and if Hailee Steinfeld accepts the part of Bishop, she will be the second confirmed cast member. Since this is the MCU, the new role could also lead to a spinoff or appearances in Marvel's movies as Kate Bishop for Steinfeld.

Taking the Hawkeye role would not exactly be Hailee Steinfeld's first foray into the superhero genre. She starred in the action-packed Bumblebee last year, and voiced the superpowered, alternate-dimension Gwen Stacy in Sony's animated hit Spider-Man: Into the Spider-Verse. Her next major role will be starring as Emily Dickinson in Apple TV's modernized version of the poet's life, Dickinson.

Fans will have to wait a while to finally see Kate Bishop in action, though. Hawkeye is not slated to premiere until late 2021 on Disney+. By that point, fans will have a good idea about how these new series relates to the MCU at large, since The Falcon and the Winter Soldier, WandaVision, and Loki will all be released in late 2020 and early 2021.

More like this
Who Will Star In Disney+'s 'Percy Jackson' Series? Casting Is Happening Now
By Dylan Kickham
'The Marvels': Release Date, Cast, Trailer, Plot, & More Info
By Ani Bundel
Will Sharon Carter Be The Villain In 'Captain America 4'? This Theory Makes Sense
By Ani Bundel
Stay up to date