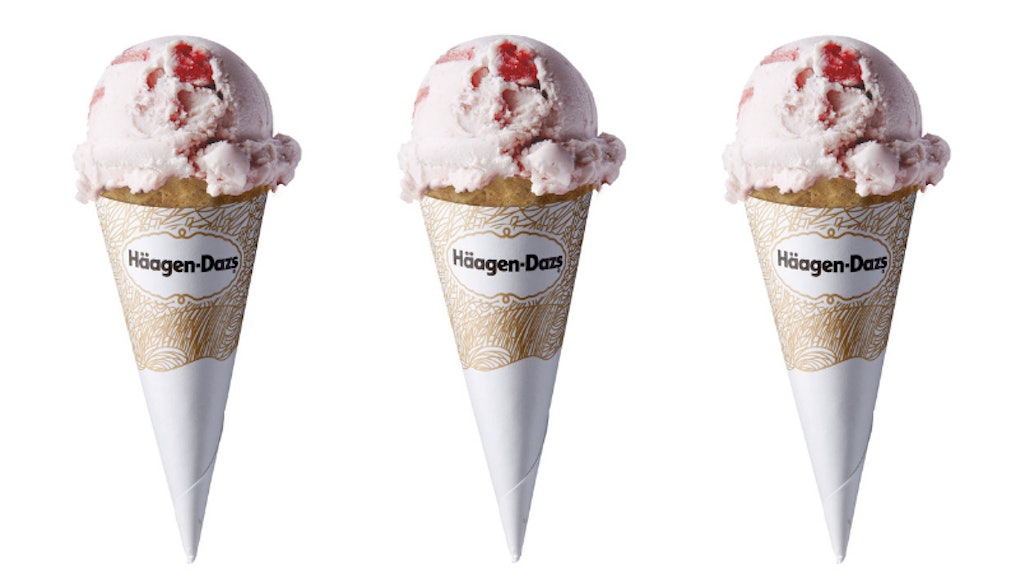 It's officially ice cream season, y'all, and we're all just days away from the sweetest food holiday of the month. That's right: Häagen-Dazs' Free Cone Day 2019 on May 14 is almost here, and my tastebuds are already rejoicing ahead of the festivities. Come Tuesday, you can enjoy any flavor of ice cream you're craving on the house, which is definitely a reason to celebrate.

According to a press release shared on Tuesday, May 7, the Brooklyn-based ice cream company gave Häagen-Dazs faithfuls the rundown on what to expect for the beloved annual promo. This year, you can head to any participating Häagen-Dazs storefront in the U.S. between 4 p.m. and 8 p.m. to order one free scoop of the ice cream flavor of your choice in a cup, sugar cone, or wafer cone. IMHO, the only thing better than a cone of Mint Chocolate Chip ice cream is a free cone of Mint Chocolate Chip ice cream, and something tells me that you'll be watching the clock for 4 p.m. to arrive on Tuesday, May 14 to go claim your sweet eats.

Unfortunately, the one-day promo is only going on at actual Häagen-Dazs stores, so no, you can't head to your freezer aisle and take home a pint of Bourbon Vanilla Cream Truffle on the house. Still, the Free Cone Day deal is going on after work hours, so you have about four hours to get to your closest participating location and grab your free scoop.

If you can swing it, I'd recommend trying to beat the 5 p.m. rush and long lines by heading over early and leaving your closest Häagen-Dazs with a scoop of Vanilla Swiss Almond, Rocky Road, or whatever else you might be craving, completely gratis.

Adam Hanson, the President and General Manager of the Häagen-Dazs Shoppe Company, Inc., called out the busy workers who make it all possible behind-the-scenes, aka honey bees, in the press release:

Häagen-Dazs knows your best deserves our best, which is why we are celebrating our customers with free scoops on May 14 . . . at Häagen-Dazs Shops. We look forward to Free Cone Day every year as an opportunity to thank our loyal fans while simultaneously recognizing the pollinators that make our ice cream possible.

If you don't happen to live near a Häagen-Dazs storefront, you can still get in on the flavors of the holiday by taking a trip to your freezer aisle. ICYMI, the ice cream retailer has been slaying the flavors game recently with a boozy lineup of spirit-inspired options like Irish Cream Brownie, Rum Tres Leches, Bourbon Vanilla Bean Truffle, and Stout Chocolate Pretzel Crunch. There's even a dairy-free Amaretto Black Cherry Almond Toffee flavor that lets lactose-intolerant customers or people who don't consume dairy get in on the fun. It's not quite the same thing as a free scoop, but hey, I'll take it.

Plus, with Häagen-Dazs' Free Scoop Day less than a week away, there's no better way to celebrate the countdown to a complimentary cone than trying out some new ice cream flavors, right?