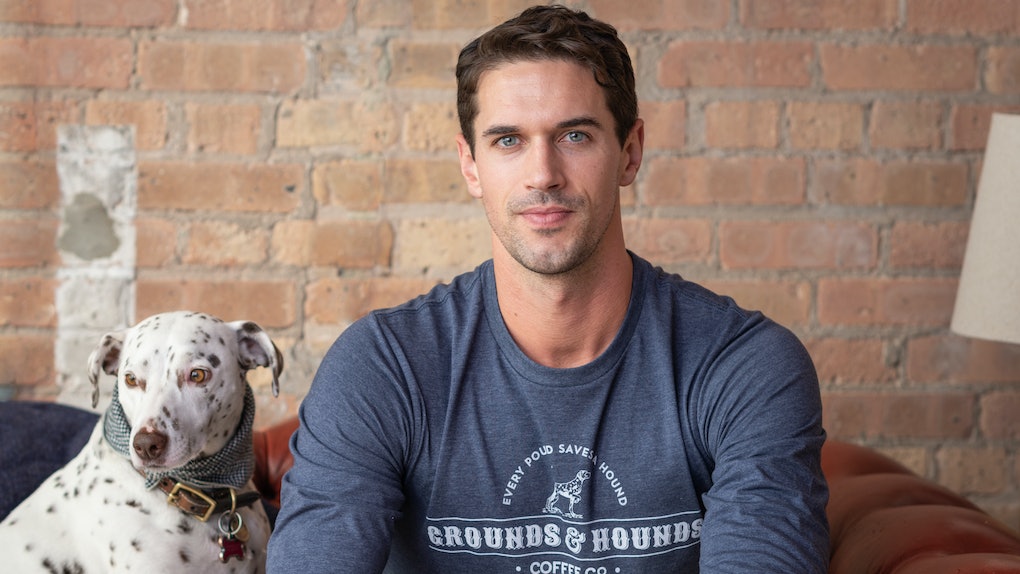 If you ask any pet owner, one of the worst parts of the day is that moment in the morning when you have to say goodbye to your furry BFF when you head off to work. Of course, many offices are dog-friendly these days, but what if you could say that your pup is actually the reason you have your job? That's exactly the case for Jordan Karcher, founder of Grounds & Hounds Coffee Co., who was inspired to start his coffee company not long after he adopted his dog Molly in 2012.

Karcher is the CEO of Grounds & Hounds Coffee Co., an online coffee company that donates 20 percent of all its profits to help fund rescue programs in animal shelters across the United States. Operating out of a three-person office in Chicago, the company has donated $150,000 to animal rescues since 2014.

In 2012, Karcher adopted Molly, his brown and white Dalmatian — who is also the inspiration for the brand's logo and the company as a whole. He calls Molly "the representation of rescue," so it's no surprise that after adopting her, Karcher began volunteering at animal rescue organizations to help more animals in need. His work with rescues made him aware of the fact that, at the time, 2 million dogs were being euthanized nationally each year. Karcher believed this was a problem that could be solved by supporting animal rescue organizations that work to publicize the issue and take action, like promoting spay and neuter and microchipping dogs.

Even if you didn’t like our coffee, at least you’d be able to feel good about helping a dog along the way.

Soon, his time volunteering got him thinking about animal rescue from a "business perspective." In the non-profit world, Karcher explains, "you’re always fundraising; you’re always trying to find someone to donate money or how to raise more money." He started thinking of it differently. "I looked at it and I said, 'Well, if we could create a product or a concept that has a large enough customer base and high enough retention, then maybe we could find a way to create continuous revenue or continuous funding to these organizations.'"

And, yes, coffee was his first instinct. Coming from a family with a wine and spirits background and having a bachelor's degree in international business, Karcher began selling coffee from the Grounds & Hounds website in 2014. He says he thought at the time, "Hey, what better way to break the ice for premium coffee than a dog and being able to do some good?" Karcher anticipated success early on. "Even if you didn’t like our coffee," he says, "at least you’d be able to feel good about helping a dog along the way. That was really why I thought coffee had a lot of upside."

The early days of the company actually involved Karcher fulfilling orders from the classroom, since he was in the process of earning his MBA from the University of Notre Dame. He shares, "I was in the middle of a class in macroeconomics, and I’d be sitting there answering customer emails or I’d be leaving to take wholesale orders. It was a very turnkey operation to say the least."

After his graduation from Notre Dame in 2015 (he even took orders during his commencement ceremony), Karcher turned Grounds & Hounds into his full-time job. From selling six types of coffee, two mugs, and a tote bag, Karcher saw Grounds & Hounds "become one of the faster growing online coffee companies." According to Karcher, the brand's revenue has grown annually by at least 50 percent for the past five years. While the business success is nice, he says, "We’ve also been able to do some really amazing things for animal rescue and evolve social impact business," which is at the heart of the company's mission. As of the company's five-year anniversary in April 2019, its efforts have provided over 2.5 million meals to shelter dogs in need and helped save over 3,000 pups from being euthanized by transferring them to no-kill organizations.

We started it to help dogs, so it’s kinda hard not to [be supportive].

Today, Karcher's duties have evolved from just trying to get his business off the ground. Not only has he grown his inventory to include apparel and items like hot chocolate and single serve pods, but he's also expanded the ways in which the company can help fund rescue organizations, like the Grounds Crew, which was launched in December 2018. The new program gives eligible non-profits a unique code that customers can use at checkout, and then a percentage of that purchase goes directly to the organization.

Grounds & Hounds is also expanding into partnerships to help do more for animal shelters. The Puppy Bowl blend, a seasonal offering sold around the Super Bowl, was offered for the second year in a row in 2019 thanks to a partnership with Animal Planet. Not only do 50 percent of the the blend's profits go to help animal rescue organizations fund the transfer of shelter pets to foster homes, but each bag also comes with an official "Team Ruff" or "Team Fluff" bandana, so your own pup feels right at home during the big game.

Karcher describes his daily duties as part "data scientist," part marketing and advertising, and part content creation and production. On any given day, Karcher could be meeting with coffee roasters to develop new blends, visiting animal shelters to drop off hundreds of dog toys, analyzing data, looking for new paid media strategies, or filming a video for the brand's content series, Bark Like a Local, which is a guide that provides information about dog-friendly places in various cities. His duties definitely keep him busy, but the variety of responsibilities is something that Karcher thinks has helped him. "It really tests your ability to be flexible, but I think that’s what’s exciting to me, more so than being an expert at something," he shares. "I like to have an opportunity to just push myself to see what else I can do and what else I can learn — and ideally bring all the experiences together into some cohesive form of a company."

We wanna make a difference.

Five years after Karcher sold his first bag of coffee, he's been able to see Grounds & Hounds expand its reach. The brand has grown from helping eight rescues in as many states in 2014 to helping over 300 rescue organizations across the U.S. just five years later. While it might not be a traditional path, Karcher says his friends and family were all on board right away. He explains, "We started it to help dogs, so it’s kinda hard not to [be supportive]. We saw a problem, being the animal euthanasia in the country ... and I think most people in my personal network all feel the same way where they love animals, they love dogs. We wanna make a difference, so going after it was pretty easy to get people to buy in."

While his network was supportive of him, that didn't mean Karcher was immune to feeling the pressure of creating your own business from the ground(s) up. Karcher explained how he felt during some of the more uncertain moments. "I never doubted that it wouldn’t work at any point, maybe irrationally, but I thought it’s on me to not screw it up, because I had dogs and coffee," he says.

His advice to anyone who wants to forge their own path in business? Choose something you're passionate about, because that will make all the hard work worth it. "It’s important to do work that matters, and that’s what’s fun for me."

More like this
These National Pet Day 2021 Tweets Are Filled With The Cutest Dog & Cat Photos
By Daffany Chan
Here's How To Enter Hotels.com's Tax Write-Off Vacation Giveaway For A Chance At $2,700
By Lara Walsh
Thomas' English Muffins' Cinnamon Bun Flavor Is A Sweet Breakfast Mashup
By Daffany Chan
Stay up to date