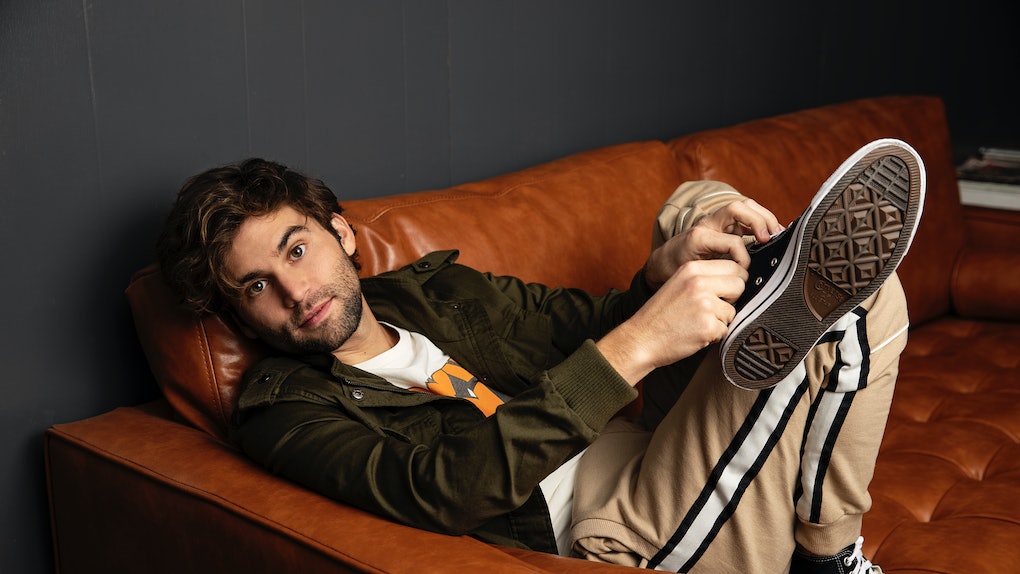 When Jake Borelli joined the cast of Grey's Anatomy in Season 14, his character Dr. Levi Schmitt was an awkward young intern. He was the butt of a lot of jokes, especially after earning the literally on-the-nose nickname "Glasses" when his spectacles fell into an open-body cavity. But at the start of Season 15, something changed; Schmitt became a more confident character. He became a truer version of himself. He came out as gay. And when his character chose to come out, Borelli realized he had the same choice to make himself: Would he come out to his fans? Borelli ultimately decided to come out publicly right as his character did on Grey's Anatomy, and found it to be a really rewarding experience. Elite Daily spoke with him about what that was like, and Jake Borelli's quotes about coming out are truly inspiring.

During the summer hiatus between Seasons 14 and 15, Borelli was spending time in New York when he got a phone call from Grey's Anatomy showrunner Krista Vernoff. She pitched him a new idea for his character. "She said, 'I think we’re going to sort of have Levi blossom this year and come into his own,'" Borelli tells me.

Vernoff wanted Levi to become more self-assured in Season 15. She told Borelli that she wanted the character's confidence to come from learning about and accepting his sexual identity. Borelli was on board for this character arc right away.

"I was I was so excited because that [confidence] was something that I have felt in my life and it’s also a story that I don’t see that often," Borelli explains. Often times coming out stories will depict a character facing challenges because of their sexuality, like being met with hostility, but, Borelli and the Grey's Anatomy writers were excited about depicting a coming out story that didn't focus on the hardships involved, but instead on the character being embraced and embracing himself.

Borelli reveals, "When I was growing up, there were a lot of stories rooted in shame and a lot of stories about the character immediately being faced with adversity. Those stories are so true and so needed in our culture, but I think a story that’s also needed was one where someone came out and was empowered by it and greeted with love. And so that was the story that, through talking, Krista and I and especially the other writers started forming."

Vernoff and the Grey's Anatomy writers invited Borelli into the writers' room to provide creative input. He got the chance to help direct Levi's path as the character came out and began a relationship with orthopedic surgeon Nico Kim. Borelli even got to tell the writers about his own experiences. Borelli, who is now 27 years old, came out to his friends and family when he was 18, but tells Elite Daily that he knew he was gay when he was in eighth grade. When Borelli did come out, he was met with lots of love and support from the people in his life, similar to Levi's experience. Borelli wanted to make sure that the positivity of his own personal experience came through in Levi's journey.

He explains, "I wanted to perpetuate that story that there are people out there that will be okay with it and there will be people that will support it. And even if you’re not supported by those people right now, you will find them. You will find people that love you for you."

Borelli came out to friends and family almost a decade ago. But as he began examining his character's sexuality, he realized hadn't talked about his own sexuality publicly. With his role on Grey's Anatomy, Borelli gained a large platform and was suddenly in contact with thousands of people on a daily basis.

"The young queer fans of the show started being honest with me and started saying that my character's coming out and the beginnings of my character’s arc were giving them confidence to come out or mirrored their own coming out process," Borelli explains. He realized that he wanted to be as open with his fans as they were being with him. "And it was sort of that honesty that I was like, 'Oh, you know what, if I’m going to have this relationship with this large group of people, I need to be honest and authentic with them too.'"

Borelli attributes his fans' courage as a big factor in encouraging him to be vulnerable. So the night that Grey's Anatomy aired Levi and Nico's first kiss, Borelli took to Instagram to come out alongside his character.

As a gay guy myself, tonight's episode was so special to me. This is exactly the kind of story I craved as a young gay kid growing up in Ohio, and it blows my mind that I'm able to bring life to Dr. Levi Schmitt as he begins to grapple with his own sexuality this season on Grey’s Anatomy. His vulnerability and courage inspire me every day, and I hope he can do the same for you. To all of you who feel like little Levis out there, know that I do too, that you are seen, and that we're all in this together. And to everyone who has supported me over the years, I can't thank you enough, and I love you more than all the stars...

Since posting about his sexuality on Instagram, Borelli has enjoyed connecting with fans who, months later, still reach out to him about their own coming out experiences.

"I’ll just read a bunch of the new comments of people that are finally feeling seen by the show and feeling represented," Borelli says. "Which is something so vital for art and television and the film industry moving forward. It’s honestly been a really beautiful experience."