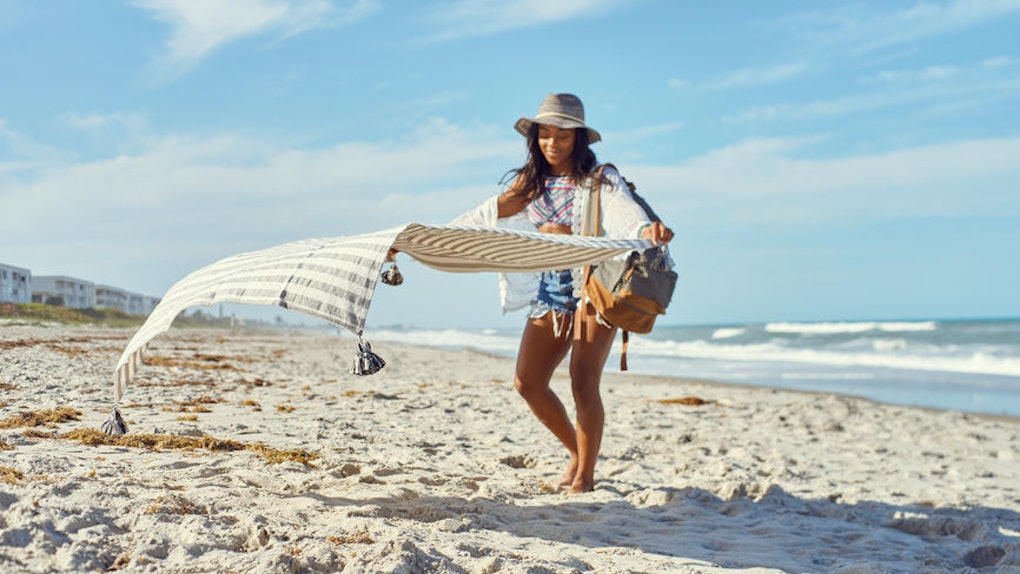 Frontier Airlines is offering seriously cheap flights to Florida right now. If you've been going back and forth on booking that beach trip, well, consider this the sign you've been waiting for. Why? Well, because Frontier Airlines' April 2019 flight sale has fares to the Sunshine State starting at just $20. You could feasibly book a roundtrip flight to Florida for $40 if you play your cards right. However, if you want to take advantage of this flight sale, you'll need to book your tickets ASAP. This Frontier Airlines sale is only sticking around for a couple of days. Here's what you need to know.

You've got less than 48 hours to lock in low-priced flights included in the Frontier Airlines April fare sale. The flight sale is currently underway and runs through until Thursday, April 11, according to Frontier Airlines. The jet-setting deals are valid for nonstop travel within the U.S. Monday through Saturday, and you don't need to purchase a roundtrip ticket to access the low-cost fares.

However, the travel window for Frontier Airlines' current sale is pretty limited. The $20 flights must be used by Sunday, April 28, according to Frontier Airlines. That's a fairly tight turnaround. I know, it's kind of a bummer that it doesn't last longer. Sometimes that's just how these super cheap flight sales work. Although, talk about affordable if you can swing this one. If you're willing to pay slightly more for your fare, Frontier Airlines also has $25 flights to a wide variety of destinations. These fares are valid a little longer, with the travel window extending to Wednesday, May 15.

As I was writing this story, the $20 flight from Atlanta to Orlando disappeared. I'm not sure if the seats for that particular flight sold out at the $20 price point, or what happened. It's my experience that low-cost flights usually don't stick around for long, so the sooner you book the better. Just something to keep in mind as you peruse the fares.

At the time of publication, there was one $20 flight to Florida left. One-way tickets to Tampa, Florida from Charlotte, North Carolina start at $20, and the return flight may be just as cheap depending on your travel dates. Don't live in North Carolina? Not to worry. Remember those $25 flights I mentioned? Now it's time for those to come into play.

If you live in Atlanta, you can have your pick of flights to Florida. Fares to Orlando and Sarasota start as low as $20 each way from ATL. Orlando is less than an hour drive to some of Florida's east coast beaches, and Sarasota is home to its own gorgeous Gulf Coast beaches. So, you really can't go wrong with either destination. In total, the Sunshine State is home to 1,197 miles of coastline, according to the Florida Department of State.

Fares from Chicago to Jacksonville, Florida can be found for as low as $25 each way during the Frontier Airlines April flight sale. Basically, you can score a roundtrip ticket from Chicago to Florida for $50. Here are some other noteworthy fares included in the flight sale:

While the flights are great for anyone on a budget, just keep in mind that Frontier Airlines is a low-cost airline carrier. That means you'll have to pay for things that may normally be included on other airlines like choosing your seat and carry-on luggage (excluding personal items like purses, totes, and computer bags), according to Frontier. So, as you can see, your ultra-cheap plane ticket can easily turn into the price of a regular flight. You can avoid the extra fees by opting to check your bags online prior (you'll save up to 50 percent of the usual cost) to your flight and forgoing a seat assignment.

OK, now that you know the drill, it's time to go take a look around for flights. You've got until Thursday, April 11 to make it happen. Safe travels.