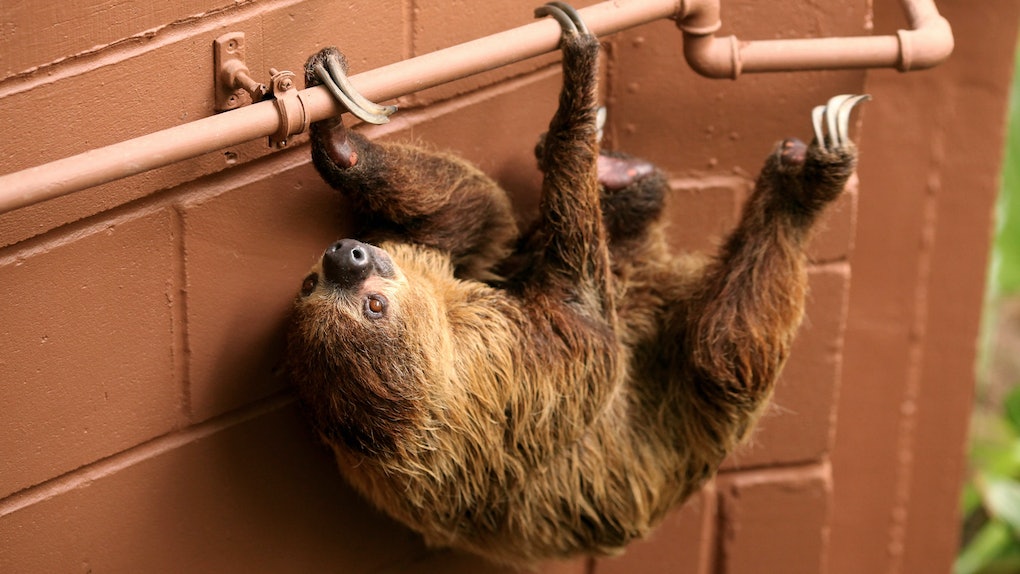 When I get old and gray, I hope to be as well as off as these two sloths living at a retirement home across the pond. Before we proceed, I do want to clarify that this isn't just any ol' retirement home. This establishment was designed and built especially for sloths. The aging creatures need a place to live out their golden years, and Folly Farms' Sloth Retirement Home is just the place to do that.

I first spotted the news over at Travel and Leisure, and decided to do a little digging of my own. Folly Farms is located about 60 miles outside of Wales. The zoo and adventure park is home to all sorts of interesting animals and fun rides, but nothing piques my interest as much as the Sloth Retirement Home. The living quarters are onsite at Folly Farms and provide a safe haven for older sloths to rest their bones and enjoy the latter half of life.

I know, I know. How does a sloth decide to go into retirement? Well, the process is a little more complex than that and that's where Folly Farms comes in. The animal establishment decided that instead of breeding young sloths, they would take in sloths who are retiring from other zoos. That's right, folks. Even sloths retire from their day job eventually. Just like the rest of us, these two-toed creatures need a place to relax and ease into autumn of life.

"By taking on these older animals and giving them a comfortable retirement, we’re helping conservation efforts at other zoos by freeing up enclosures for younger, breeding pairs," zoo curator Tim Morphew wrote in a blog post shared on the Folly Farms website.

The retirement home is currently housing two elderly two-toed sloths: Tuppee, 24, and Lightcap, 34, according to Folly Farms. Tuppee joined Folly Farms in March 2016 and Lightcap joined the squad a little later in Nov. 2018. Lightcap is making a bit of history already. He's currently the fifth oldest sloth on file amongst zoos in Europe, according to Folly Farms. According to research from the Space Radiation Lab at Caltech, sloths can live for up to 30 years. Although, that's not always the case. A sloth at the Adelaide Zoo in Australia, more affectionately known to her fanbase as Miss C, lived to be 43-years-old. Sadly, she passed away in June 2017, making history as the world's oldest known sloth, according to National Geographic.

It seems Tuppee and Lightcap are settling in nicely, despite their 10-year age gap. The pair enjoys eating boiled root vegetables because of the soft texture. Zoo workers often add supplements to their meals such as cod liver oil to help their aging bodies. If you plan to be in Great Britain any time soon, I highly suggest putting the Sloth Retirement Home at Folly Farms at the top of your sightseeing list.

But, if you won't be making the trip to Great Britain anytime soon, you can get your sloth fix stateside. The Zoological Wildlife Conservation Center in Rainer, Oregon offers several different sloth encounters, including the very unique experience of spending the night with a sloth. The slow-moving creatures don't like loud noises and prefer quiet spaces. During the sleepover, you'll get to interact with the brown, furry creatures, as well as feed and pet them.

Not all species of sloths are endangered, only the pygmy sloth is considered critically endangered, according to the World Wildlife Fund. But, it's nice to see Folly Farms giving these adorable animals a comfortable environment to spend the rest of their lives.