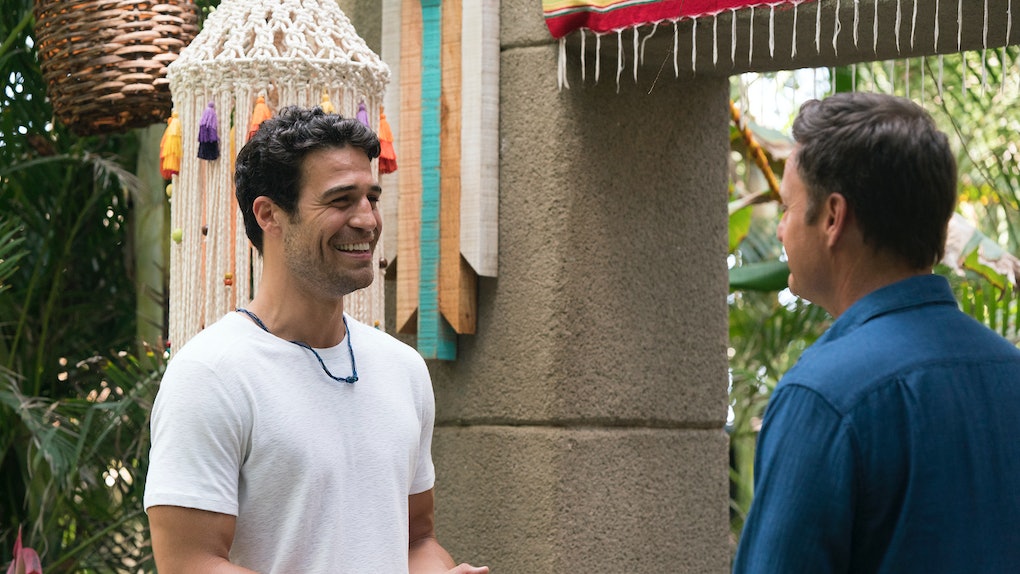 Bachelorette men disappointing us onscreen and off seems to be the unexpected trend of this summer, but seeing as he hasn't had a chance to act stupidly on TV yet, internet favorite Grocery Store Joe has fans eagerly waiting his turn at romance on Bachelor in Paradise. ICYMI, Chicago native Joe Amabile is an avid Instagram user, and you should totally follow Grocer Joe from The Bachelorette on social media for Paradise insight. Who knows, maybe a quick follow will even help you find a deal on Joe's produce someday.

Found on Instagram with the handle @joeamabile1, Joe first won over Bachelor Nation with his very rom com-esque Bachelorette intro package. In it, he roamed around the grocery store he owns and talked about love not working out for him yet. But seriously, where was the recently heartbroken girl who just wants ice cream and accidentally knocks over his fruit stand during her search?

Even with his online presence getting tons of attention since the Bachelorette premiere episode and his Night One elimination aired, Joe has been open on Instagram about nerves surrounding his TV debut. Before the first episode began, he shared a video his friend took of Joe saying he felt "not good" about the upcoming premiere. Well, that makes sense — when has getting cut on Night One ever gone well for a contestant before?

The honest, slightly camera-shy Joe that we saw on Men Tell All sometimes pops up in his Instagram Stories. Often roaming Chicago for unique restaurants and eating experiences, Joe posts Stories of himself legitimately rating dishes from well-known Chicago establishments. Every now and then, he'll even post videos of himself cooking, which we all know that every woman loves to see.

The #ad and #sponsored content hasn't hit Joe's Instagram yet, but appearances from other Bachelor alums are aplenty. When Bachelorette Becca Kufrin was in Chicago, Joe met with her, posting a photo of them together. More recently, he uploaded Instagram Stories with fellow Season 14 contestant Jordan Kimball and has posted photos with Jordan, Paradise contestant Nick Spetsas, Colton Underwood, and fan favorite Jason Tartick. If Jason becomes the next Bachelor, can he take a woman on a date to Joe's grocery store?

Most importantly, Joe definitely isn't afraid of sharing a thirst trap. That may be a given in Bachelor Nation, but Joe must be enough self-aware to bless us with steamy gems like this.

Of course, you've got to get you a man who can do both. Joe has also posted photos proving he can be that ruffled, bearded guy you grab Sunday brunch with — table for two, please!

As Season 5 of Paradise begins, we'll have to wait and see if Joe pulls a Wells Adams and posts running commentary on the cast's shenanigans. We already know a little bit about what he's up to this season thanks to the Bachelor in Paradise trailer. Joe appears to be caught in a nasty love triangle with Season 22 star Kendall Long and Season 14 alum Leo Dottavio. Don't get too excited yet, but it also looks like Joe hangs out with the babies of Paradise, Emmy Tolbert and Bella Bass. If he posts behind-the-scene shots of himself with both babies in his arms, I don't think anyone's ovaries would handle it well.

Here's to Grocery Store receiving the only TV reboot we really need. Season 5 of Bachelor in Paradise begins on Tuesday, Aug. 7, at 8 p.m. ET on ABC.