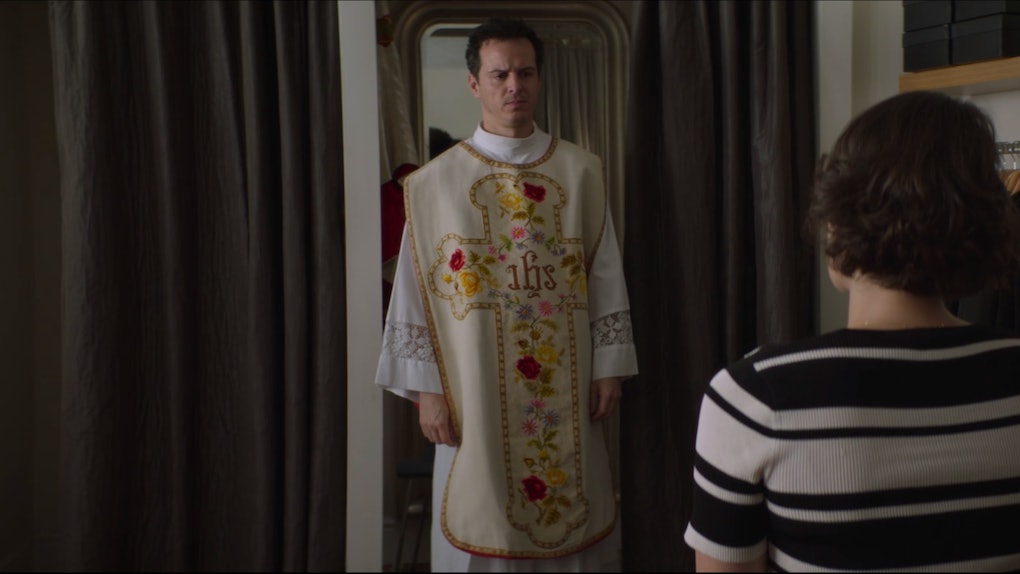 Awards season is here, folks. On Monday, the Hollywood Foreign Press Association announced its nominations for the best in TV and film, and while there were the requisite disappointments and controversies, audiences found at least some of the association's decisions to be spot on. This year, Fleabag's 2020 Golden Globe nominations seem to be the big thing pretty much all fans can get behind.

Fleabag won big at the 2019 Emmys, but many viewers were shocked that Andrew Scott, who played the Hot Priest on the show, was snubbed from even a nomination from the Television Academy. It seems the Hollywood Foreign Press is here to right that wrong, though, because it nominated Scott for a Golden Globe for his supporting role in the series.

Season 2 of Fleabag followed the titular lead (Phoebe Waller-Bridge) as she navigated a complicated, and pretty steamy, relationship with the off-limits priest. He quickly became known as "Hot Priest" (for obvious reasons), but his character was much more than just good-looking. Scott's character was complicated, morally-conflicted, and funny; the actor's ability to balance these pieces aptly to tell the story of Fleabag is an admirable accomplishment.

Waller-Bridge recognized Scott's talents from the beginning, and recently told The Guardian why she cast him for the role. "It couldn’t have been anyone else,” she said. “It wasn’t an easy ask — someone who could convince as a person who’s seemingly totally at peace, but at the same time has a promise of danger." It seems Scott not only achieved Waller-Bridge's goals, but he also won a lot of fans' hearts along the way.

Scott's nomination falls under the category "Best Performance by an Actor in a Supporting Role in a Series, Limited Series or Motion Picture Made for Television," and he's in the running for the award alongside Succession's Kieran Culkin, Chernobyl's Stellan Skarsgard, Barry's Henry Winkler, and The Kominsky Method's Alan Arkin. It's a tough group to be in, so fans hoping for the Hot Priest to come out on top might considering praying for him to win.

The 77th Golden Globe Awards will air on January 5, 2020. Check out the full nomination list for more details on what's to come.

More like this
Why Won't NBC Air The Golden Globes In 2022? Let's Break Down The Drama
By Ani Bundel
These 'Shadow And Bone' Easter Eggs Will Make Fans Of The Books SO Happy
By Ani Bundel
'SNL's "Gen Z Hospital" Sketch Has Twitter Calling Out AAVE Appropriation
By Dylan Kickham
Stay up to date