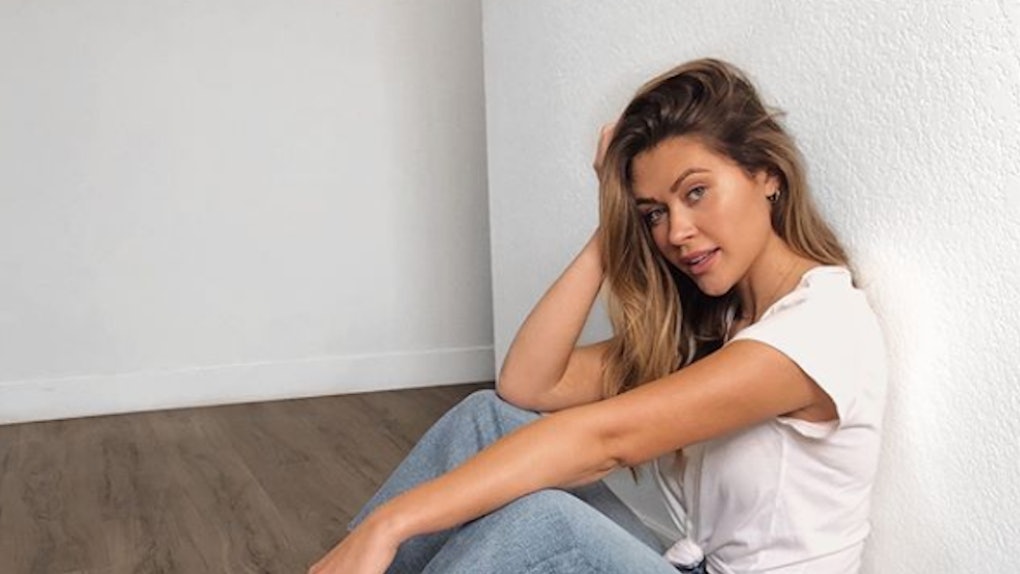 Caelynn Miller-Keyes made Bachelor history earlier this year when she became the first contestant on the franchise to speak openly about her sexual assault. The former beauty queen is a rape survivor, and during her one-on-one date with Colton Underwood in Singapore in October 2018, she chose to tell him about her experience. Though Miller-Keyes tells me in an interview for Elite Daily she was initially nervous about how the public would respond to the episode, which aired on Jan. 28, 2019, fans' reactions to Caelynn Miller-Keyes' sexual assault story on The Bachelor were more supportive than she ever could have imagined.

"In relationships, as survivors, this is a conversation that you have to have with a partner. Our relationship progressed very quickly, and it felt like the appropriate time to share it with him," Miller-Keyes says. "It always felt like the right decision to me until maybe the night it was going to air. That's when I started to freak out. I broke down several times that day and the week leading up to that. I was just like, 'I don't know how people are going to respond. Will people call me a liar?' Because that's what I got in college."

She tells me that although her conversation with Underwood was not an easy one, she felt it was an important next step in their relationship. "All the cameras kind of took a step back, and it really felt like it was just Colton and me sitting down," she says. "It didn't feel like we were filming a TV show. It just felt like a normal, natural relationship in that moment."

In the episode, Miller-Keyes described going to a party with three friends, then waking up naked in her own bed the next morning with no memory of the night before. She says a friend called to say that they had all been sexually assaulted. Later, another friend called to say that another guy invited his fraternity brothers to lift up Miller-Keyes' dress and take photos. She went to the police and was illegally denied a rape kit by the first hospital she visited. By the time she was able to procure a rape kit at a second hospital, the results of the exam were inconclusive because so much time had passed since the assault. (According to the Rape, Abuse & Incest National Network (RAINN), in most cases, DNA evidence should be collected within 72 hours in order to be analyzed by a crime lab.) One perpetrator was expelled from school, though she says the others faced no consequences.

According to Miller-Keyes, Underwood's response was respectful and supportive. "I felt like Colton reacted very well," she says. "[Survivors] just need to feel safe, and he created this safe space for me."

On the night the episode aired, Miller-Keyes gave her phone to a friend, and asked her to delete the hateful comments and DMs she expected to receive, saying, "I can't see it. It'll break me. But she handed my phone back to me about 15 minutes later and was like, 'Caelynn, you need to read this. This is incredible.' It was absolutely terrifying. But in the end, I feel like it was really great, because it’s still blowing up my phone, even today — people thanking me in messages, people sharing their story with me, and people telling their parents for the first time, or people talking to their husbands for the first time, and that’s really incredible."

In Miller-Keyes' experience, there's no one-size-fits-all method for dating after sexual assault. "I think the most important thing is to take time," she says. "You need to heal. I did the opposite of that. I jumped into a relationship just because I felt so broken, empty, and lonely. I wouldn’t recommend doing that, because it just ended up being toxic, unhealthy, and unhelpful. So just take time, seek out a therapist, talk to friends, talk to family, just have a support system behind you. When you’re ready to date, when you feel very ready, you don’t have to jump in [on the] first date, second date, third date, and say, 'This happened.' It’s whenever you’re comfortable. [It could be] a year down the road."

Similarly, clinical pyschologist Dr. Josh Klapow also recommends that survivors take time to heal before dating again. "The rebuilding process should be slow and incremental," he says. "This is not just about learning to have sex again; it’s about learning to see the assault as a non-sexual event and to reengage in the world of sexual intimacy that is healthy and loving."

Her time on The Bachelor was not her first experience speaking up about sexual assault. During her tenure as Miss North Carolina USA 2018, she advocated for better Title IX policies addressing sexual assault at schools across the state. In particular, the outcome of her own on-campus hearing inspired her to advocate for better campus sexual assault proceedings. She has partnered with advocacy organizations including RAINN and the Joyful Heart Foundation's project End the Backlog to raise awareness for sexual assault.

Miller-Keyes says she hopes to continue to bring attention to the issue. Her bravery is inspiring, and clearly has gone a long way toward helping other survivors feel seen and understood. As she told Underwood during that powerful moment on The Bachelor, "It’s not an easy thing for me to talk about, but it’s something that’s really important."