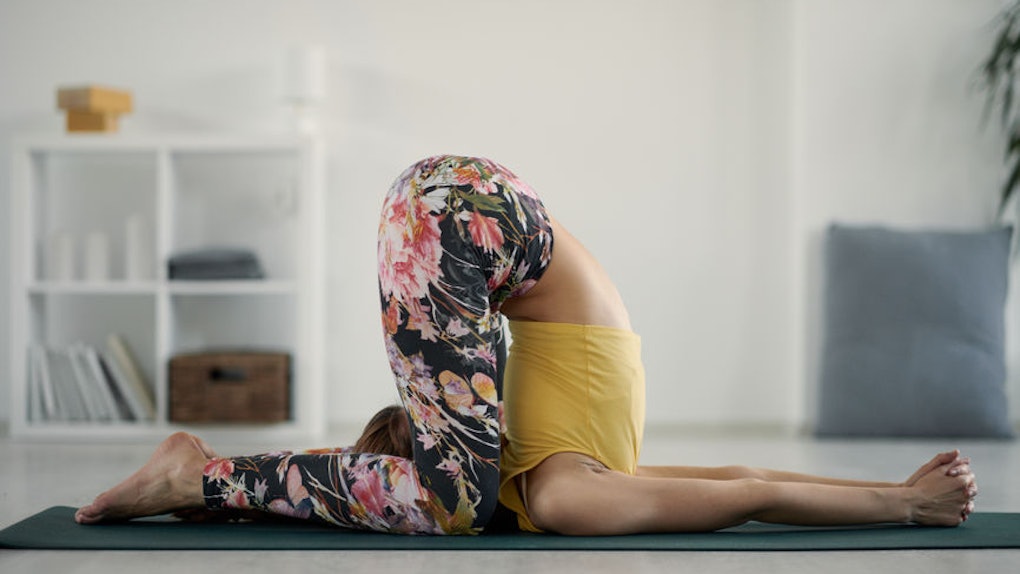 Picture this: You're at your favorite yoga class after an incredibly long and stressful day, and sweet, sweet savasana (aka everyone's favorite pose) finally comes around to close the session. Your body feels loose and incredible after an awesome flow, and you're so exhausted that you literally feel like you're going to doze off — so instead of relaxing and enjoying yourself during the meditation, you're fighting the urge to fall asleep because that wouldn't be very ~zen~ of you. Well, my friends, during Yoga Nidra sessions, falling asleep during yoga and meditation isn't just OK, it's actually encouraged by many teachers. Yes, seriously.

Understandably, you might be thinking, what the heck is this woman talking about? Doesn't falling asleep completely defeat the purpose of yoga and meditation? What would all the ancient yogis who bestowed this powerful practice upon us have to say about this?!

Well, I can't really tell you exactly what they would say, but according to Eliza Skye, a certified yoga teacher, director of Santa Fe Community Yoga, and an experiential guide at Sunrise Springs Spa Resort, the age-old yogis would actually be pretty supportive of dozing off in the midst of a mindfulness practice.

In fact, Skye tells Elite Daily, she encourages everyone to nod off during yoga — even the people in her own class.

"Sleep is the best form of meditation," Skye says. "I love it when people fall asleep [in my classes] and I always encourage it, if that's what they need. If people snore, even better."

Skye teaches deep relaxation yoga and meditation classes at Sunrise Springs in Santa Fe, New Mexico, and part of these restorative experiences involves guiding her students through a form of blissful meditation called "Yoga Nidra." Yoga Nidra is a form of deep-sleep meditation in which you're guided through detailed descriptions and imagery that promote relaxation, all while lying down in the most comfortable position possible. According to Huffington Post, doing one Yoga Nidra session is the equivalent of sleeping deeply for two whole hours — except, in reality, you've only done a single meditation session, which can be as short as 10 minutes, or as long as an hour. "Yoga Nidra is also referred to as yogic sleep because it allows your body to fall into the rhythm of sleep while maintaining consciousness," Skye says.

I tried a Yoga Nidra session myself to see what it was all about, and I can 100 percent attest to the fact that, by the time you're done with just one class, you will literally feel like you've just emerged from six straight months of hibernation. You know that glorious feeling when you "accidentally" nap for three hours, and when you wake up, you honestly can't recall what year it is or how old you are? But you still feel like the most spectacularly cleansed, stress-free, and radiant woman that has yet to graze this Earth? Yeah, that's how Yoga Nidra makes you feel, my friends.

According to Skye, a Yoga Nidra session has this incredibly restorative effect on you because it activates your parasympathetic nervous system (aka the part of your nervous system that relaxes you), improves blood circulation throughout the body, reduces cortisol (aka stress hormones), and helps sharpen your overall concentration and focus long after the session itself. Personally, I experienced nearly all of these benefits after my first Yoga Nidra class: My stress seemed to weigh a little less heavily on my shoulders, and I even had an easier time staying on-task at work. Honestly, I might start letting myself fall asleep during yoga more often because, well, why the heck not? Clearly my body digs it, right?

And it turns out, science digs it, too: In a 2014 study published in the International Journal of Yoga Therapy, women who were victims of sexual trauma did a Yoga Nidra program for about 10 weeks, and by the end, they reported "decreased body tension, improved quality of sleep, improved ability to handle intrusive thoughts, improved ability to manage stress, and an increased feeling of joy." The research doesn't lie, people, and I think the ancient yogis were on to something with this brilliant, meditative siesta.

If you're enticed by these blissful benefits and think you'd enjoy this laid-back form of meditation, there's likely a Yoga Nidra class at a studio near you — and if not, YouTube is always there to guide you at home.

Before you begin your session, whether you're at home or in a class, Skye recommends doing some diaphragmatic breathing, as well as a few gentle, guided stretches to help prepare your body for optimal relaxation.

In her own classes, Skye says she likes to segue into a restorative Yoga Nidra session with the use of yoga therapy rolling balls that release tension in the head and neck when gentle pressure is applied. When I tried these bad boys out for myself, any stiff sensations that had built up from my perpetually-hunched writer's posture felt like they'd evacuated my body within seconds. In fact, I almost started crying because the physical release I felt in my body was just that powerful. If you want to try this at home, you can do so by placing two tennis balls in a sock, tying off the end, and massaging your neck. It's a super easy, quick way to treat yourself to a little TLC when it feels like your stress is just making a home for itself inside your body.

As for the yoga/meditation itself, if you still feel like you're not sure where to start on your own, Skye says your personal practice can be as simple as clicking on a short, guided meditation on YouTube, and lying in your bed with your eyes closed for a few minutes, either first thing in the morning or right before you go to sleep — bonus points if you literally drift off to sleep before the session is officially over.

The bottom line is this: If you've ever felt guilty for doing yoga or meditation the "wrong" way, let those preconceived notions go, girlfriend. "There's no good or bad way of meditating," Skye tells Elite Daily. "It's simply about showing up for yourself."