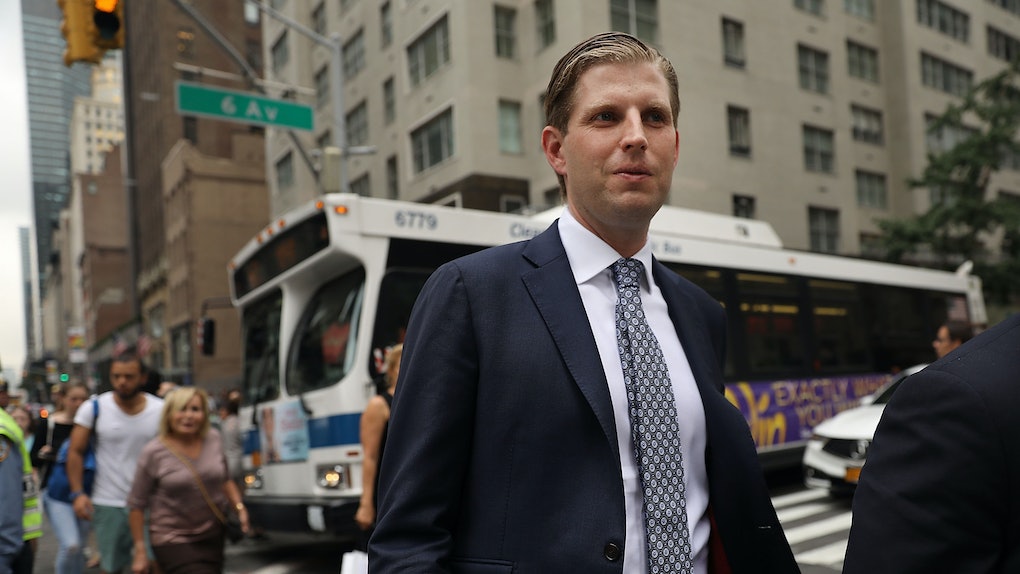 On Monday, Nov. 27, President Donald Trump made a joke about "Pocahontas" — his offensive nickname for Senator Elizabeth Warren — while he was supposed to be honoring Native American code talkers. It wasn't great! Then, on Tuesday, Nov. 28, his son, ever the defender, Eric Trump, tweeted about the president's "Pocahontas" joke. He tried to make a logical leap to prove that ~the media~ is just out to get his father, but instead he just looked like a questionable fool.

"The irony of an ABC reporter (whose parent company Disney has profited nearly half a billion dollars on the movie 'Pocahontas') inferring that the name is 'offensive' is truly staggering to me," the younger Trump tweeted.

So let's break this down. The "ABC reporter" Trump is referring to seems to be Jon Karl, who asked White House Press Secretary Sarah Huckabee Sanders why the president felt "the need to say something that is offensive to many people while honoring the Navajo code talkers," according to The Hill. (Sanders replied that "Pocahontas" is not a racial slur.) And, yes, ABC is owned by Disney, which made the 1995 cartoon film Pocahontas.

But implying that, somehow, Karl, the ABC reporter, is being hypocritical by calling the term "Pocahontas" offensive because... the company he works for is owned by a company that made a movie by the same name 22 years ago is, simply, illogical. For a lot of reasons!

Let's take a step back to look at President Trump's use of "Pocahontas" in the first place.

Here's the thing about offensiveness: More often than not, context matters. No, the word "Pocahontas" on its own is not offensive. It's the name of a real person in American history. But it's the context that can make usage of the word "Pocahontas" offensive. (Also, just to sidebar real quick, Pocahontas, the movie, isn't all that great itself if we're talking about offensiveness — it glamorizes colonization, is historically inaccurate, and relies on stereotypes. Just saying!)

As previously mentioned, President Trump uses "Pocahontas" as a way to mock Senator Elizabeth Warren. So he's bastardizing the name of a historical figure from the Native American community to mock an elected official. Trump calls Warren this name to refer to her dubious claims of having Native American heritage (Warren was told by her family that she is part Cherokee; one genealogist found her to be 1/32 Cherokee, but that claim has been questioned).

On Monday, President Trump was addressing Navajo code talkers who used secret messages during World War II (cool!). In the middle of talking to them in what was supposed to be an honoring ceremony, the president slipped the "Pocahontas" reference.

"You were here long before any of us were here," the president said. "Although we have a representative in Congress who they say was here a long time ago. They call her Pocahontas."

Leaders in the Native American community said that President Trump's use of the term is offensive.

"The reference is using a historic American Indian figure as a derogatory insult and that’s insulting to all American Indians," John Norwood, general secretary of the Alliance of Colonial Era Tribes said, according to NBC News. He went on to say that President Trump should "stop using our historical people of significance as a racial slur against one of his opponents."

Similarly, National Congress of American Indians President Jefferson Keel said it's unfortunate that "the president's use of the name Pocahontas as a slur to insult a political adversary" overshadowed the honoring of the code talkers. Navajo Nation, meanwhile, said that President Trump's use of "Pocahontas" constituted "cultural insensitivity," according to The Chicago Tribune.

Ultimately, the people of a marginalized group are the ones who get to decide if usage of their own word is offensive or not. Not the person making the "joke," not white man Eric Trump, and not even a pretentious social justice warrior white girl like me. If someone tells you that they are offended by something, you don't get to tell them that they're wrong. It's that simple, Eric, and it has nothing to do with a kids' cartoon movie.