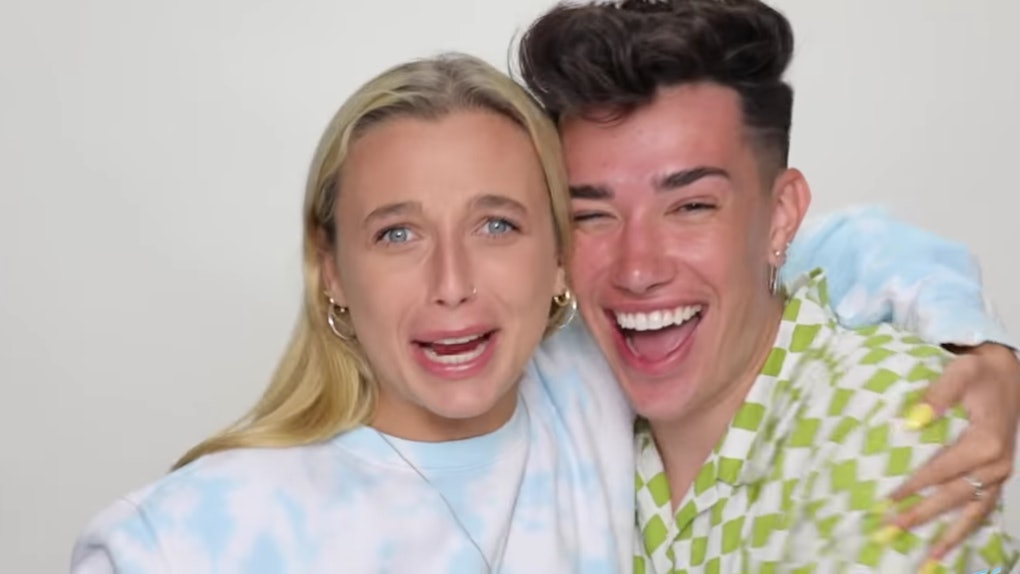 The Sister Squad beef may officially be squashed — well, for two of its former members, at least! It's been more than a year since Emma Chamberlain, James Charles, and Ethan and Grayson Dolan stopped collabing on YouTube videos, and after some subtle shade was thrown around, a reunion has happened and it's giving fans life. Emma Chamberlain and James Charles' Sister Squad reunion was basically a tell-all of their YouTube drama.

The Sister Squad was once the *it group* of YouTube. That is, until Chamberlain, Charles, and the Dolan twins ghosted the world as a collective cold turkey in 2019 and stopped making videos together. There was a lot of subtle hints that things weren't exactly friendly between the group shared in the past year, with the Dolan twins speaking out in July 2020 about the rumors of a feud.

"We’re not in sync with anybody in the squad by any means," Grayson said during a YouTube video. "We actually haven’t talked to them in a while. I wouldn’t say that I’m confident that everybody is comfortable speaking about that.”

Chamberlain, meanwhile, had a pretty shady response on Aug. 5 when asked by paparazzi if she'd reunite with the Sister Squad. She simply replied "Have a good one" and closed her car door on the reporter who asked.

But a few weeks later, Chamberlain uploaded a video with Charles that was not only so fun for Sister Squad fans, but it also revealed a lot about their YouTube drama.

In the video, Chamberlain admitted it felt "really good" to be back making videos with Charles, noting she missed him. “It’s been a really long time,” Charles said. “Emma and I recently reconnected after I think like two years. Absolutely insane ... a lot can happen over the course of two years. It's been really amazing just catching back up and really being in each other’s lives again.”

Around the 5:55 mark in the video, Chamberlain and Charles compare making friends on YouTube to high school. "It ends up not working," Chamberlain said. Charles agreed, saying fans "expect all YouTubers to be friends and stay friends forever, which is never going to happen."

Later in the video, the duo dished on how they reconnected, saying there wasn't anything "weird" going on between them and that they were just doing their own thing for a while. Luckily, their mutual friend Larray brought the sisters back together, and they realized how much they missed each other. While Charles admitted he thought there was something amiss between them because Chamberlain had seemingly ignored his texts in the past (turns out, she'd changed her number), everything is totally good between the pair now that they've hashed everything out. (Check out the full story at the 9:00 mark in the YouTube video above.)

About 11 minutes into the video, Chamberlain brings up the paparazzi and how their questions "cause drama in your personal life," seemingly in an attempt to clear the air about her aforementioned response to the reporter who asked about a Sister Squad reunion in August.

While a full Sister Squad reunion is seemingly still not in the cards, Chamberlain and Charles' video gave fans a lot to celebrate for the time being.

More like this
Why Isn't James Charles Hosting 'Instant Influencer' Season 2? The Show's Changing Things
By Abby Monteil
Kourtney Kardashian & Travis Barker's "Pass The Phone" TikTok Is A Family Tell-All
By Abby Monteil
How To Make Lizzo's Brussels Sprout Nachos From TikTok That Are Both Bussin' & Vegan
By Rachel Chapman
Stay up to date