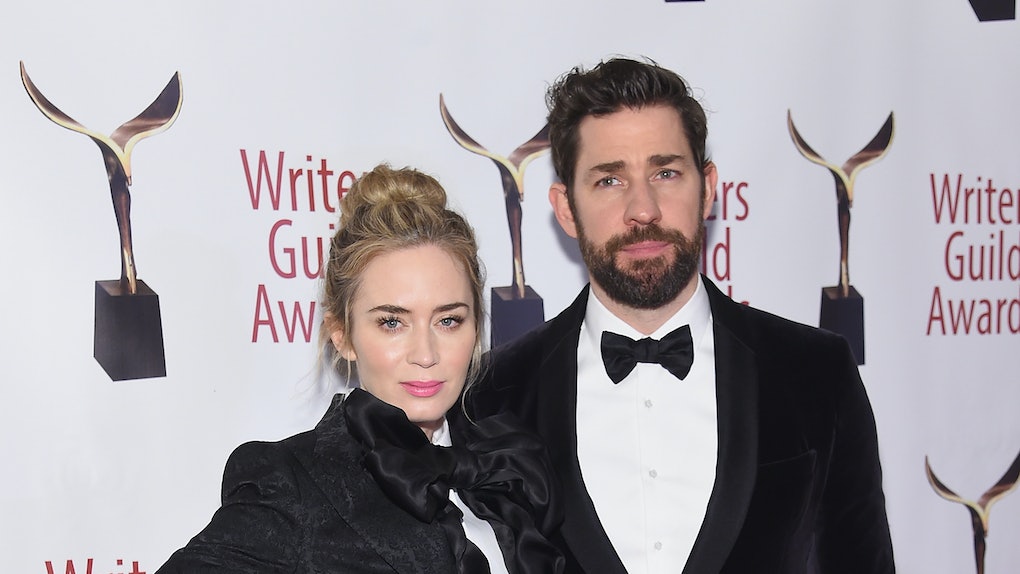 When couples wear matching outfits it can be vomit inducing. We get it, you love each other, okay?! But Emily Blunt and John Krasinski wearing matching tuxedos on the red carpet at Sunday night's Writers' Guild Awards did anything but make me want to roll my eyes because they are the greatest twosome to ever walk this planet and their coordinated looks only proved that further. If you're going to so the "twinning" route with your significant other then you better absolutely nail it—take notes from Blunt and Krasinski, because they know how it's done.

The couple was in attendance because Krasinski was nominated for an award for co-writing the original screenplay of 2018's A Quiet Place. Blunt co-starred alongside Krasinski in the masterpiece (awww), which is a total must-see even if thrillers and/ or dramas aren't your thing. Trust me, it'll blow your socks off. While Krasinski ultimately lost to Bo Burnham's Eighth Grade, the actor was still one of the most talked about attendees of the night thanks to his and Blunt's matching and quite literal take on black tie apparel. Both rocking blazers, bowties, and black trouser pants, Blunt and Krasinski proved once and for all that coordinated couple style actually can be cool.

Blunt wore a sleek Dolce & Gabbana suit, the blazer of which featured a floral jacquard pattern and ruffled collar detail. She paired it with an oversized bowtie that somehow made clown clothing proportions look incredibly chic, along with a silver and pearl ring, which was the only piece of jewelry needed thanks to its behemoth size. To finish off the look, she wore black pointy toed pumps with beautifully ornate buckles and added a op of color with rose pink lipstick. Blunt looked striking, as per usual, and brought some playful edge to the red carpet pantsuit.

Krasinski, on the other hand, kept things much more traditional, opting for a suit featuring a black velvet blazer. He finished off his look with black patent shoes, a watch, and a classic black bowtie.

Blunt's look for the night was a far cry from what she wore three weeks ago to the Screen Actors Guild Awards, although both looks featured ruffles prominently. To January's event, Blunt wore a shimmery pink gown by Michael Kors Collection that featured two giant pink ruffles for straps as well as a small but glamorous train. Krasinski arrived in a straightforward tuxedo.

At the SAG awards, Blunt won Best Supporting Actress for her role in A Quiet Place, which Krasinski also directed. In her acceptance speech, Blunt said, "I'm going to share this completely with my husband, John Krasinski. Because the entire experience of doing this with you has completely pierced my heart directly. You are a stunning filmmaker. I'm so lucky to be with you and to have done this film with you." The shoutout brought Krasinski to tears and tbh had I been there, I definitely would've been bawling as well.

They could wear matching paper bags and it would be cute.