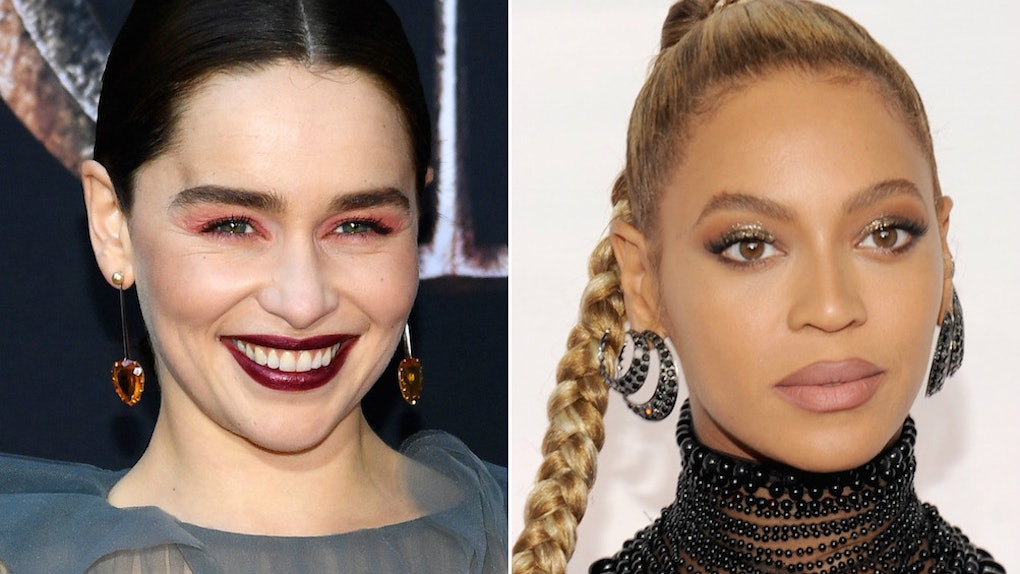 Game of Thrones is over, and no one is more relieved than Emilia Clarke. The actress has been playing the iconic Daenerys Targaryen since 2011, and her watch finally ended when the award-winning HBO series came to an end on Sunday, May 19. Whether you liked the ending or not, Clarke is particularly relieved that we all finally know what happens to Dany, seeing as she's been keeping her character's fate a secret for the last two years. She's collected a lot of fans over the years whom she hoped wouldn't be upset by the dark turn Dany took at the end of the series, but the fan she was most worried about disappointing was another queen. Emilia Clarke's reaction to Beyoncé being a fan of Daenerys is honestly hilarious. We stan a relatable queen who also stans the queen.

OK, y'all, I have given you plenty of time and warning to get out of here while you still can. Now, I drop the spoilers. Halfway through the series finale of Game of Thrones, Jon Snow kills Daenerys Targaryen just minutes after she's touched the Iron Throne for the first (and only) time. Homegirl never even sat on it. It was a heartbreaking, but not entirely surprising end to Dany's story. Given that she had needlessly killed everyone in King's Landing in the previous episode after the army had surrendered, and later rallied her troops saying she planned on "liberating" the world from tyrants, Jon stabbed her to death while they kissed for the last time so she couldn't kill more cities full of innocents.

Heartbreaking, I know. Drogon appeared moments later and tried to nudge his mother awake, but she didn't wake up. He grabbed her in his claw and flew away, and that was the last viewers will ever see of Daenerys Targaryen and Drogon.

Clarke, of course, has known this was Dany's fate for two years and has had to keep her lips sealed. In an interview with The New Yorker published the night of the series finale, Clarke said she ran into Beyoncé at her and JAY-Z's Oscars party in February and she was worried that the queen wouldn't love Dany once she saw the final season.

"I see this vision, this angel, this incredible woman float towards me," Clarke said. "I can't quite control myself. And Beyoncé says to me, 'Oh, my goodness, it's so wonderful to meet you. I think you're brilliant.' I just couldn't handle it! I was on the verge of tears. I could see myself reflected in her eyes. I could see her go, 'Oh, no. I misjudged this. This girl is crazy and I'm not going to have a real conversation with another celebrity. I'm having a conversation with a crazed fan who's looking at me like a rabbit in the headlights.' Which is exactly what I was.

"I said, 'I've seen you live in concert and I think you're amazing and wonderful! Wonderful!'" she continued, "And all I wanted to scream was 'Please, please still like me even though my character turns into a mass-killing dictator! Please still think that I'm representing women in a really fabulous way.'"

Beyoncé to Emilia: Oh my godddddd, such a fan! Love you! Love Dany! What a role model!

"I was just, like, Oh, my God, my absolute idol in life is saying that she likes me, and I know for a fact that by the end of this season she's going to hate me," she added.

Don't worry, Emilia. I'm sure Beyoncé still stans you even though Dany had a bit of a rough ending! What is dead may never die.

More like this
This 2021 'Game Of Thrones' Season 8 Trailer Is So Confusing... & So Good
By Ani Bundel
'All-American' Star Samantha Logan Is Putting Herself First
By Rachel Varina
Kyla-Drew On 'Dad Stop Embarrassing Me!', College Life, & Michelle Obama
By Dylan Kickham
Stay up to date