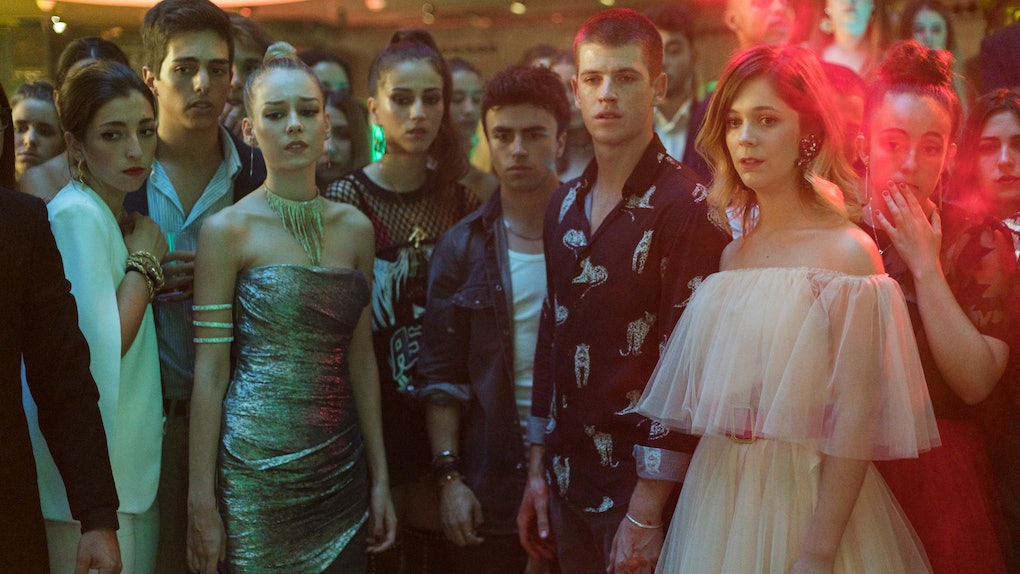 More Elite is officially headed your way. Ever since it premiered back in 2018, Netflix's hit teen drama has been full of wild twists and turns. But in one of its most surprising reveals yet, it turns out the show has already been renewed for another season before Season 4 has even dropped. While you're waiting to catch up with all the gossip at Las Encinas, here's everything to know about Elite Season 5.

Warning: Spoilers for Elite Season 3 follow. As the Elite Season 3 finale made clear, the series is going to change in a big way moving forward. At the end of the season, almost all the characters got unexpected happy endings, a huge change from the soapy murder mystery that usually hangs over their lives. With lead characters Nadia and Lucrecia off to college in the United States, Carla off to study abroad, and Polo dead, it seemed like the main ensemble's stories were already wrapped up.

Only a handful of original characters were still left at Las Encinas, and as Netflix confirmed in July 2020, Season 4 will introduce several new characters with their own twisted secrets to untangle. One thing is clear: The upcoming seasons of Elite are bound to expand the show's world in a whole new way. Here's what to know about Season 5:

On Monday, July 20, a couple months after Season 3 dropped, Elite's official twitter account confirmed that original stars Itzan Escamilla (Samuel), Miguel Bernardeau (Guzmán), Arón Piper (Ander), Omar Ayuso (Omar), and Georgina Amorós (Cayetana) will all reprise their roles in Season 4. As long as no one else becomes a victim of another bloody Las Encinas crime, there's a good chance these cast members will also appear in Season 5.

Also likely to pop up are Elite's four brand-new cast members being added to Season 4's main cast: Manu Rios, Carla Díaz, Martina Cariddi, and Pol Granch. It's not clear exactly who they're playing yet, but since most of the returning characters have to repeat their senior year, they'll probably portray students in the same grade that get wrapped up in some drama with the original main characters.

Since the show's main mystery surrounding Marina's death got wrapped up in Season 3, the main teens are bound to dealing with all-new drama in Season 4 that will carry into Season 5. The returning characters will also have to deal with repeating their final year of high school and the trauma of everything they've been through so far, which could lead to even more interesting character studies.

There's good reason to believe Elite Season 4 will premiere sometime in spring or summer of 2021, since the show wrapped filming on it back in December 2020. Provided no coronavirus pandemic-related filming delays get in the way, that means viewers can expect Season 5 to drop sometime in 2022.

Since Elite Season 4 hasn't even premiered yet, it'll be a while before fans get a sneak peek at Season 5. In the meantime, fans can check this space for more updates as they arrive.