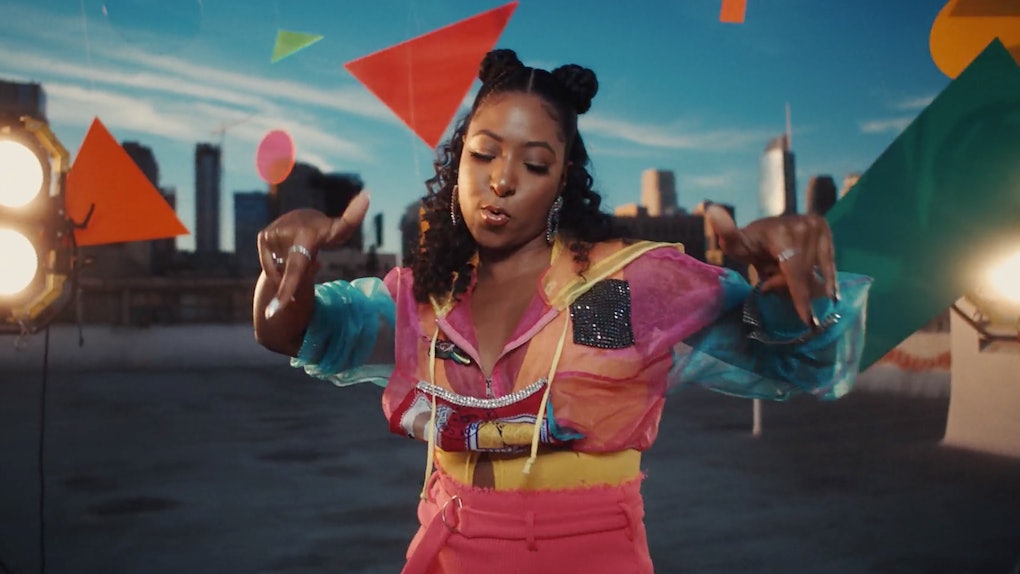 No song has hyped up the masses recently quite like e.l.f. Cosmetics' original "Eyes. Lips. Face." song, which blared through countless phone speakers whenever someone opened TikTok for the past few months. Created by Grammy-winning producer iLL Wayno, the track features vocals from singer Holla FyeSixWun and was originally commissioned for e.l.f.'s viral #EyesLipsFace TikTok campaign. Just as quickly as it took the TikTok world by storm, e.l.f. has now partnered with Republic Records (home to hits from artists like Ariana Grande, Julia Michaels, and Hailee Steinfeld) to release the "Eyes. Lips. Face." music video. And of course, it slaps even more now.

If you didn't already let loose to the "Eyes. Lips. Face." song, the music video, available to watch here, makes it damn near impossible not to. Featuring both iLL Wayno and Holla FyeSixWun tearing it up on a rooftop, the video sets the ultimate party scene, showcasing all types of eyes, lips, and faces feelin' themselves and wearing makeup however they want to — a prime representation of e.l.f.'s ethos as a brand.

"From the beginning we set out on a mission to unleash the brand’s innate renegade spirit," said Kory Marchisotto, e.l.f.’s Chief Marketing Officer, in a press release. “A ground-breaking TikTok campaign, a viral chart topping song, and now the release of a music video in partnership with Republic Records is an illustration of our ability to break the rules of beauty.”

In addition to beauty rules, you can add records to the list of things e.l.f. is breaking. What started as a fun TikTok challenge quickly transformed into the platform's most viral branded campaign to date, amassing over 4 billion views as a whole and over 2 million videos created with the original sound. From TikTok OGs like @brittany_broski and @beasteater to celebs like James Charles, PatrickStarrr, and Ellen DeGeneres, so many of your faves hopped on the #EyesLipsFace bandwagon when it first launched on Friday, Oct. 4, 2019. Since then, the hype hasn't died down. The audio still frequently pops up on my TikTok feed every few videos to this day, each time with a new hilarious person finding a different way to "do that thang" with their eyes.

At its core, the "Eyes. Lips. Face." song, the TikTok challenge, and now the music video all accomplish a similar mission: to encourage everyone to leave any outdated perceptions of beauty at the door and, instead, celebrate your beauty however you want to. Now, turn the volume up on this music vid and get ready to hype each other up. It's time to serve up some eyes, lips, and face.