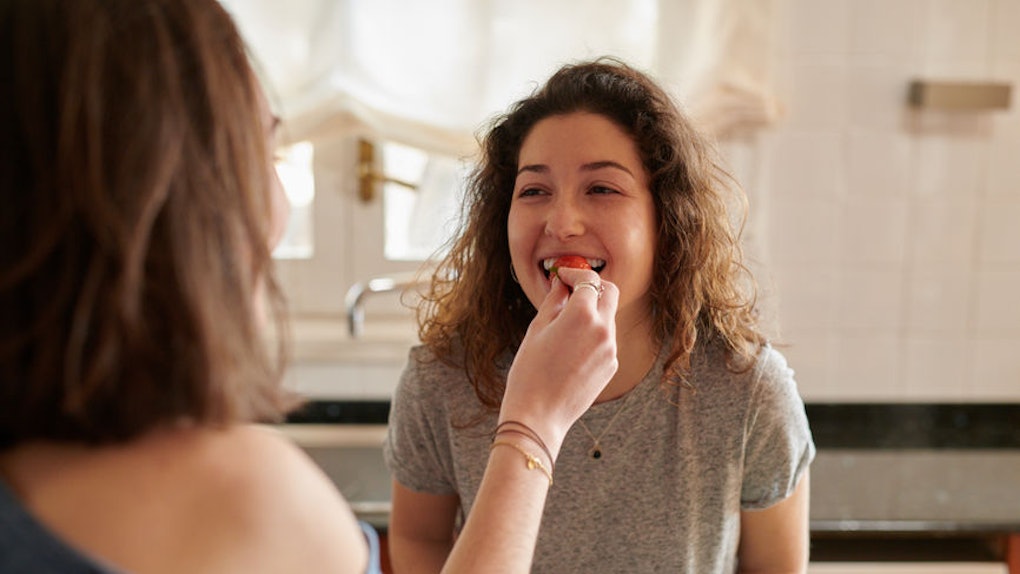 Eating Breakfast Before Your Workout Will Lead To This One Awesome Benefit, Study Shows

The thought of waking up and hitting the gym without eating anything beforehand makes me want to die. (Me? Dramatic? Never.) I don't know about you, but if I trying squeezing in an a.m. sweat sesh fasted, I wouldn't be able to get anything done because I'd be fantasizing about pancakes the whole time. Honestly, eating breakfast before a workout is non-negotiable for me, and I know many people can relate. Lucky for us, there's a cool little benefit to our pre-workout morning meals that makes nomming before exercise so much more enticing.

A new study done by researchers at the University of Bath in the UK, published in the American Journal of Physiology: Endocrinology and Metabolism, revealed that eating a nourishing breakfast before your workout increases the rate at which your body processes, digests, and metabolizes carbohydrates, both during and after exercise. Basically, your pre-workout pancakes aren't just incredibly tasty; they're doing amazing things for your body, too.

For the study, researchers gathered a group of 12 healthy male participants, who were all instructed to eat a breakfast of porridge cooked in milk two hours before they worked out. The researchers then conducted various blood tests in the volunteers to see how effectively their bodies were processing, absorbing, and using the food they'd just eaten both during and after their workout, which consisted of an hour of cycling.

According to a press release on the study from the University of Bath, "eating breakfast increased the rate at which the body burned carbohydrates during exercise," and it even continued to have this effect on the volunteers' bodies when it came to the meals they ate after exercising.

"This study suggests that, at least after a single bout of exercise, eating breakfast before exercise may 'prime' our body, ready for rapid storage of nutrition when we eat meals after exercise," Dr. Javier Gonzalez, a co-author on the study, said in a statement. In other words, nourishing your body before your workout doesn't just keep stomach-grumbling at bay. It ensures you have the energy you need to successfully complete the workout, and it even sets up your body to process any food you eat after the fact in the most effective way possible.

It's important to note, though, that while these results definitely shed light on how crucial breakfast is for your health, the study itself was pretty small, and it only included a sample of adult men. Plus, it only showed short-term results, and "longer-term implications of this work are unclear," the press release explains.

Still, it's definitely a good idea to eat something nourishing before a workout, and if your time for exercise is in the morning, breakfast is a must, girl. According to SELF, carbs and protein are the pre-workout dream team, so aim for something like a yogurt parfait, some toast with peanut butter and banana slices, oatmeal cooked in milk with fresh fruit, or an English muffin with avocado and hard boiled eggs.

Go wild, my friends. The world of breakfast foods beckons, and I don't know about you, but my body is so ready.

More like this
Can I Exercise After A Flu Shot? Experts Recommend Listening To Your Body Post Vaccine
By Georgina Berbari
14 'Schitt's Creek'-Inspired Graduation Party Ideas, So You "Remember The Experience"
By Rachel Chapman
8 Cloud Cake Recipes On TikTok That Give The OG Cloud Bread A Sweet Upgrade
By Rachel Chapman
Stay up to date