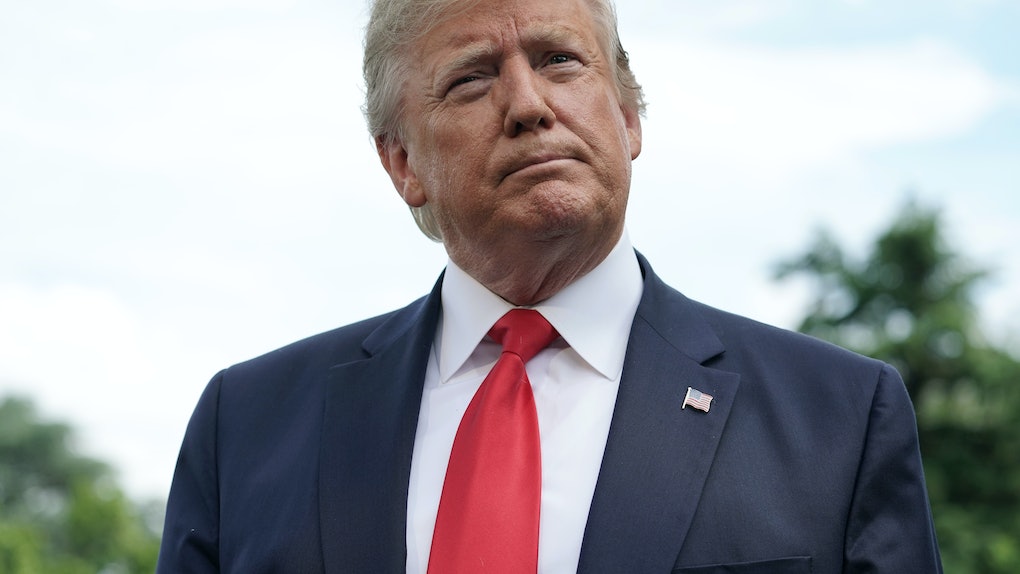 Add another entry to an already troubling list of accusations against the president: another woman has accused President Donald Trump of sexual assault. In an excerpt from her upcoming book published by The Cut on Friday, June 21, journalist E. Jean Carroll accused President Trump of sexually assaulting her in the dressing room of a Bergdorf Goodman in the 1990s. In a statement emailed to Elite Daily, the president denied the allegation, and said he had never met Carroll.

In the article, titled "Hideous Men," Carroll described the alleged assault as one in a series of men who she claimed assaulted her over the years, listing Trump himself as Number 20. She claimed she encountered him as she left the Bergdorf store in New York sometime in the fall of 1995 or the spring of 1996, and he asked her for help selecting a gift for "a girl." At the time, Carroll was well known as an advice columnist and for her television show Ask E. Jean. She claimed Trump hailed her by saying, "Hey, you're that advice lady!" before asking for her help with the gift. While selecting a proposed gift, Carroll claimed, Trump suggested that they look in the lingerie section, and when they arrived on the floor, allegedly selected a "see-through bodysuit" and asked Carroll to try it on. Carroll claimed she thought it was a joke, and that the two moved to the dressing room as she joked that Trump himself would try it on. In the dressing room, she alleged, Trump forced himself on her, unzipping his pants and sexually assaulting her. She described the alleged incident,

The next moment, still wearing correct business attire, shirt, tie, suit jacket, overcoat, he opens the overcoat, unzips his pants, and, forcing his fingers around my private area, thrusts his penis halfway — or completely, I’m not certain — inside me. It turns into a colossal struggle.

In a statement to Elite Daily, Trump denied knowing Carroll. "I’ve never met this person in my life," he wrote, adding, "She is trying to sell a new book — that should indicate her motivation." The statement continued in part,

Shame on those who make up false stories of assault to try to get publicity for themselves, or sell a book, or carry out a political agenda. ... Ms. Carroll & New York Magazine: No pictures? No surveillance? No video? No reports? No sales attendants around?? I would like to thank Bergdorf Goodman for confirming they have no video footage of any such incident, because it never happened.

The statement concluded, "If anyone has information that the Democratic Party is working with Ms. Carroll or New York Magazine, please notify us as soon as possible. The world should know what’s really going on. It is a disgrace and people should pay dearly for such false accusations."

The White House did not immediately respond to Elite Daily's request for additional comment on a photo published in The Cut purporting to show President Trump and Carroll interacting at a party in 1987.

Carroll fully acknowledged in the article that while she had told friends of the alleged assault immediately after, there was no definitive evidence of her account. She noted Bergdorf had confirmed that they no longer had any security footage from the time, and there had been no dressing-room attendant to witness the alleged assault.

Carroll is not the first woman to accuse the president of sexual misconduct. Over the years, two dozen women have accused Trump of misconduct ranging from harassment, to groping, to sexual assault. The president has denied all the claims, and the official White House position is that all Trump's accusers are lying. The White House did not immediately respond to Elite Daily's questions regarding the previous allegations against Trump in light of Carroll's accusations.

The list of the president's accusers is one that I think it's safe to say everyone hopes will not grow any longer.