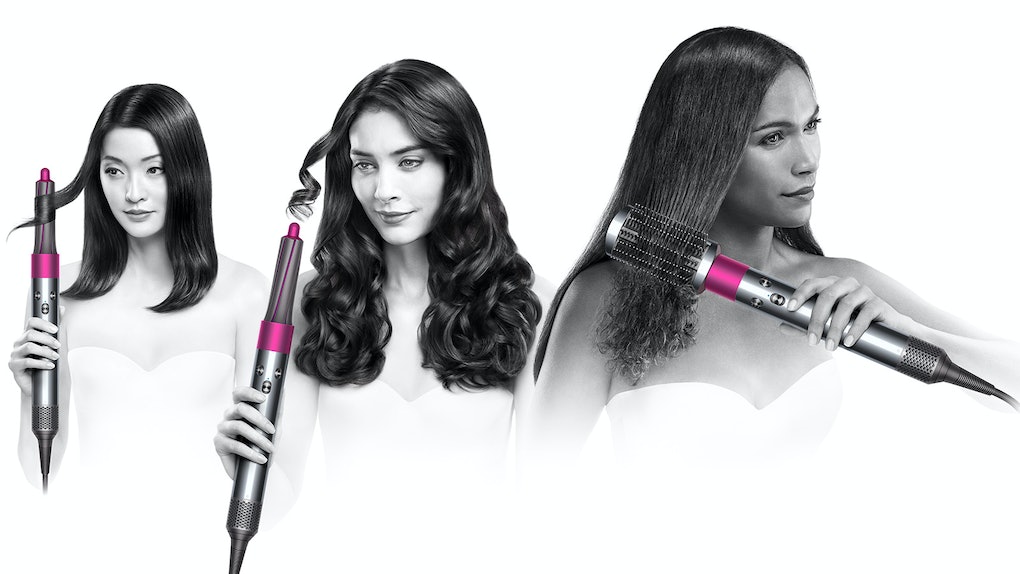 If you follow beauty news, then you know there's a hot new tool on the market that's generating quite the buzz for its promise to curl hair using air and not extreme heat. (Mark my words, robot dogs are near!) But does it work? Dyson Airwrap curling iron reviews are officially in and despite the product's $500-plus price tag (you read that right, carry on), they're pretty dang positive...for the most part. If you're considering forgoing a fancy new espresso machine or that top-grade mountain bike you've been saving for in order to snag a magic wand of your own, read on for real reviews by real people before pulling the plug. Er, finalizing the withdrawal.

Incase you're not up to date on the most cutting-edge of hair tools (*raises hand*), here's what supposedly makes the Airwrap so special. It was specifically designed with a motor that harnesses something called the Coanda affect, "the phenomenon in which high-velocity air in round objects turns into a powerful vortex (think jet engines)," as explained by Allure. What does that mean in relation to styling hair, you ask? It means that your hair will wrap itself around the barrel of the tool with no twisting or clamping necessary, which will simultaneously dry and curl it.

Rather than having to blow dry your hair and then apply another round of direct and more intense heat to your hair via a curling iron in order to get smooth curls, the Airwrap does all the styling in one fell swoop—and it uses far less heat and far more air to do it. (If you're still confused, this review from Elle has some great gifs that will hopefully clear things up.)

Now, onto the reviews! All that I've read — on Bustle, Popsugar, Allure, and Elle — gave overall positive reviews, save for a few seemingly minor drawbacks. Every editor noted how amazing it was that the tool worked on wet hair and therefore saved them time from having to both blow dry and curl (the Elle editor said the entire styling process took her 25 minutes; the Bustle editor said it took her 10), and they all were greeted with silky, intact curls upon styling completion. "...my hair was completely dry — and with volume, body, and waves. It was magical," wrote the Bustle editor, while the Popsugar editor described her results as "old-Hollywood, bouncy waves."

Indeed, if you read each of their reviews and look at the accompanying photos that go with them, you'll see they were all left with big, soft waves that look professionally done. At least to me, someone who can use a curling iron about as easily as a chicken can use a pencil.

With that said, three minor drawbacks did stick out to me, the first being something that every review brought up. Whereas you can get curls going in different directions based on how you hold a normal curling iron, the Airwrap requires you to change the barrels to switch the direction of your curl. While all three Airwrap sets come with both barrels (some also contain hair-straightening brushes — check them out here to see which one's right for you), it's still annoying to have to switch them mid-styling session and to have to do one entire side of your head before the other. "Yes, I tried holding the wand upside down to trick the process; no, it did not work," wrote the Popsugar editor. "I settled on curling all my hair in the same direction, because, you know, who has time for all that extra work?"

The next drawbacks had more to do with the result than the actual process. The Elle editor reported that while she did like the loose, soft curls the Airwrap creates, "I don't think the Airwrap could one hundred percent replace a curling iron. The curls you get are natural-looking, so if you wanted a look that requires precision, like Veronica Lake waves, the Airwrap wouldn't be my go-to." In other words, if you want tighter ringlets or super exact curls, this tool cannot give them to you.

And finally, the last note about the tool that made me go hmmm probably stuck out to me because of my own hair's wavy and slightly frizzy texture. The Popsugar editor, who has similarly texture hair, reported that "because air constantly flows from the barrel, as you hold a curl to dry it, air disturbs the rest of your roots, creating frizz. My roots were way messier than they are when I use a curling iron." Added frizz? No thank you! Although for the other editors, who have naturally straight hair, this wasn't a problem.

So, what do you think? Still want to spring for the cutting-edge tool? If so, you can shop it here on Dyson's website. Easy-as-pie waves could be in your everyday future.