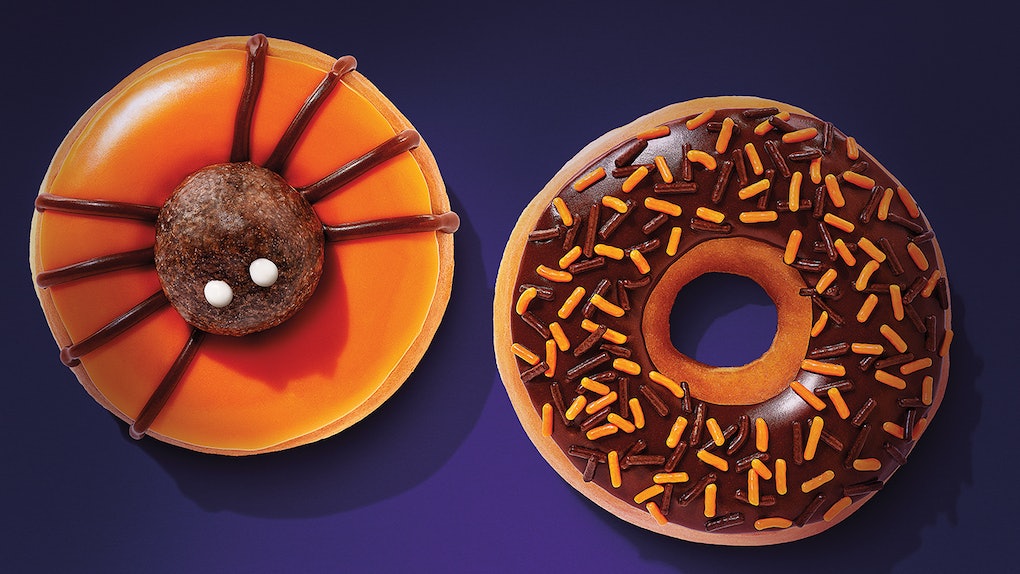 Dunkin’s Halloween 2019 Donuts Are Festive Faves For The Holiday

Now that it's October, it's officially time to get ready for Halloween. It's a good time to start thinking about what you'll dress up as for the special day, whether you spend it passing out candy to trick-or-treaters or at a themed party with friends. Since the opportunity to dress up for the holiday only comes around once a year, my recommendation is to have fun with it and get creative with your costume. Even Dunkin' is dressing up its donuts in line with the creepy looks of the season, and Dunkin's Halloween 2019 donuts are dressed-up classics that'll be as spooky as they are delicious.

In an Oct. 1 press release, Dunkin' announced the return of the Spider Donut to the restaurant's menu in October. The popular donut captures the spirit of the frightening holiday in one sweet treat — it's frosted with orange icing and topped with an "eight-legged donut creature." The donut creature will be terrifyingly delicious to eat: You'll be chowing down on a Glazed Chocolate Munchkins Donut Hole treat with chocolate drizzle for the spider legs and white or orange icing for the eyes. You can also score a 10-count of Munchkins for $2 all October long.

If you're not willing to part ways with your faves at Dunkin this season, don't fret — Dunkin' will be dressing up their classic donuts as well. In proper Halloween style, they'll be jazzed up with orange icing drizzles and sprinkles. The Halloween treats are only available for a limited time at participating Dunkin' locations nationwide, so indulge in the season's best ASAP.

Of course, all Dunkin' regulars are well aware that donuts go best paired with a hot beverage. Make the Oreo Hot Chocolate at Dunkin' your go-to drink, now that it's back for the season. Sipping on the cookies and creme-flavored drink will undoubtedly make you forget the cool temperatures outside. The Oreo Hot Chocolate is accompanied by two other hot winter beverages at Dunkin: the Original Hot Chocolate and the Dunkaccino. If you're not familiar with the Dunkaccino, you'll want to listen up. The caffeinated pick-me-up is totally coffee meets hot chocolate and is a blend of both. You can also opt to add whipped cream on top if you'd like (IMO, it always makes everything better).

This October, you'll also have the opportunity to win free donuts. You heard that right. The company will be debuting the Dunkin' Runner this year, donning Dunkin's first-ever official Halloween costume that comes from the signature "America Runs on Dunkin'" logo. The Dunkin' Runner will run into eight Dunkin' restaurants across the country over the month. At each location, 200 guests will be offered a free Halloween donut. It's a totally catch-me-if-you-can challenge that'll get your adrenaline rushing. To participate, follow Dunkin' on its Instagram account. There, you'll be able to track down the Dunkin' runner and find out exactly where the free donuts are.

As a boos-y Halloween celebration, the chain is bringing back its Harpoon Dunkin' Coffee Porter to select retailers on the East Coast. It'll be available for a limited time both on draft and in 12-ounce bottles as of Oct. 1.

With dressed-up donuts and drinks at Dunkin', October is about to be a monthlong costume party. Just remember all the treats are available for a limited time, so make sure you get a taste before the Spider Donut crawls away until next year.