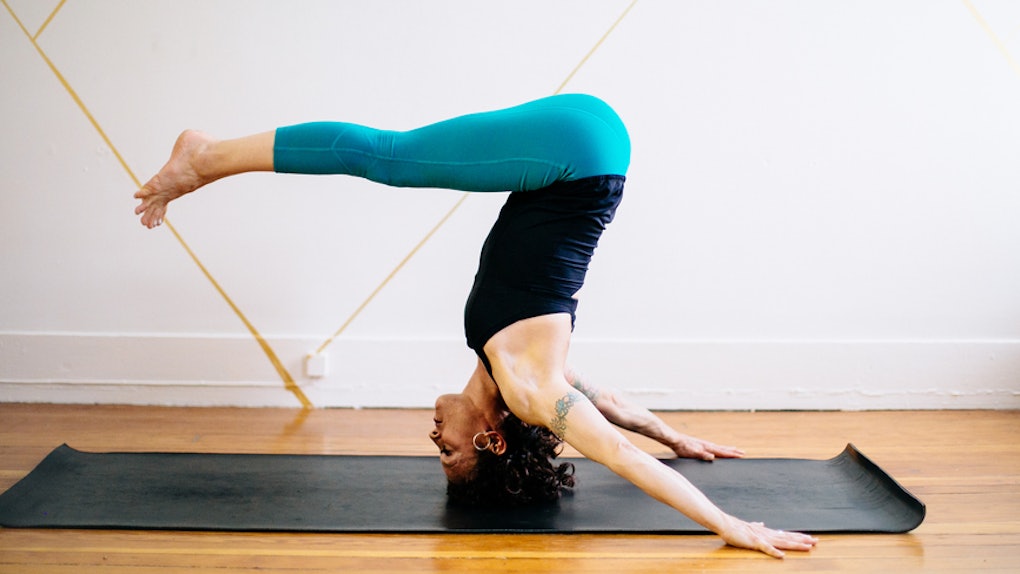 Drunk Yoga Class Is Actually A Thing, Because No One Knows Where To Draw The Line Anymore

As a yoga teacher, I am a strong believer in the fact that a relaxing flow can do no wrong. But recently, it's starting to feel like there's literally no end to the bizarre types of yoga people come up with. From vinyasa with goats, to tree pose atop horses, and now, a drunk yoga class, I just don't even know how to respond. Like, I actually can't, you guys.

Gothamist reports that 28-year-old actress and yoga instructor Eli Walker is now pairing your typical vinyasa class with an open bar on Monday nights on the Lower East Side of Manhattan. Her "drunk yoga" series is specifically catered to newbie yogis and aims to show everyone that the ancient practice isn't as intimidating as it may seem at first glance.

While it's true that many people often feel self-conscious about stepping into a yoga studio because of lack of flexibility, clumsiness, or inexperience, I'm not quite sure that throwing back a couple of shots is the solution to those problems.

But Walker apparently disagrees, as her stance is that you can take the edge off of yoga class nerves with a good ol' glass of Cabernet (or three).

Walker told Gothamist that yoga is simply about learning how to be "happy and healthy," and if alcohol is what gets you on your mat, then cue the open bar.

But, TBH, there are just way too many potential drawbacks I can think of for this to be a legitimately pleasant experience all the way through. For starters, yoga is pretty commonly known for causing mild vertigo. From inversions, to backbends, to simply breathing incorrectly, it's easier than you'd think to start feeling a bit woozy during your flow. Now add some liquid courage to the equation — not so great, right?

And, perhaps I'm stating the obvious here, and I'm sorry if I'm killing your vibes, but I really, really don't think #DrunkGains are a thing, guys. Research shows that alcohol definitely doesn't improve exercise performance (and yes, people, yoga is 100 percent considered a form of exercise).

Plus, in case you weren't aware, your "adult beverage" actually doubles as a diuretic, and diuretics dehydrate you and make you pee a lot— two things I'm pretty sure you don't want to deal with while you're chillin' in savasana.

Look, I totally get where Walker's coming from with her drunk yoga approach. Any new workout can be intimidating to try at first, but I'm a strong believer in the fact that it's always best to go about these things in the healthiest, safest way possible.

Case in point: Walker told Gothamist that one of her students who can't normally touch his toes was apparently able to do so during a drunk yoga session. That's cool and all, but is it really that safe to test your flexibility while under the influence?

Given that alcohol impairs your judgment, I'm gonna with a hard "no" to answer that question.

Since you may not necessarily make the wisest decisions after knocking back a glass or two of wine, that could mean you're making yourself vulnerable to injury by pushing yourself past your normal (sober) limits.

Look, I totally get that a soothing yoga flow is relaxing AF, but there's still a lot of effort and energy required when doing these poses, and the calories from booze simply cannot provide your body with the energy you need.

So, I don't know about you, but Nama-stay away from the combination of tree pose and tequila. There's a time and a place for both to be enjoyed in their own right, and I'm just not trying to vomit when I'm relaxing in corpse pose, you feel me?

More like this
I Tried Singing While Running Like Miley Cyrus & OMG, My Lungs
By Rachel Varina
The TikTok Recipe You Should Try, Based On Your Zodiac Sign
By Chelsea Jackson
7 TikTok Recipes Using Ramen To Make Lasagna, Pizza, Smoothies, & More Treats
By Kelly Pau
Stay up to date