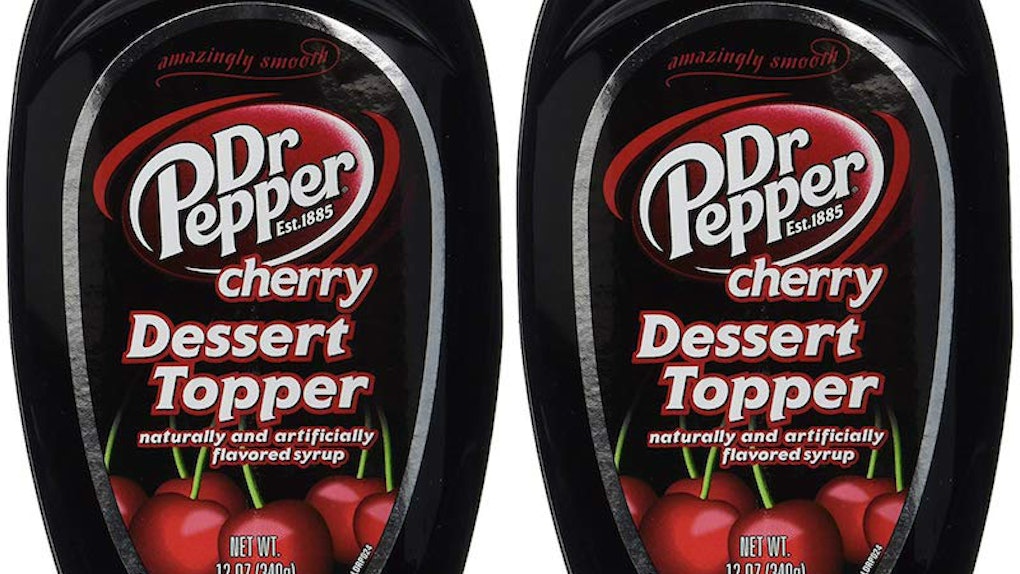 Dr. Pepper is having a moment, and I'm all for it. First, the company released its Dark Berry flavor in May 2019 (more about that later, though). Now, word about Dr. Pepper's Cherry Dessert Topper is hitting the web. Yes, my friends, a Dr. Pepper-flavored sundae topping exists — and you can buy it just in time for your summer ice cream nights. If you didn't know about the soda-inspired syrup (same), I'll do my best to catch you up. By the looks of it, you'll want to add this dessert delicacy to your ice cream bars ASAP.

I'll take it from the top. If you're a Dr. Pepper fan, then you've probably tried Dr. Pepper Cherry (aka the company's cherry-flavored soda). If you enjoyed it, then there's a good chance that you'll like Dr. Pepper's Cherry Dessert Topper. According to its Amazon page, the syrup is Dr. Pepper Cherry-flavored, which is perfect if you're trying to combine your fave soda with your sundaes.

TBH, you can use it on any dessert (not just ice cream). In fact, the back of the bottle even says, "Drizzle it on your favorite desserts for a one-of-a-kind experience." YUM.

If you've already tried Dr. Pepper's Cherry Dessert Topper, you're way ahead of the game. As Delish pointed out, the cherry-flavored syrup has been around for years — but if you haven't tasted it yet, add it to your shopping list.

Speaking of shopping lists, you're probably wondering where you can buy it. As I previously mentioned, Amazon is selling the Dr. Pepper Cherry Dessert Topper for $19.99 per bottle. If you'd rather look for something that's a little bit cheaper, you can check and see if your local grocery store is carrying it. After you score a bottle, you can start giving ice cream sundaes (or any other desserts) the Dr. Pepper Cherry treatment.

Side note: Could you imagine how delicious a Dr. Pepper Cherry ice cream float would be with a drizzle of this stuff?

Now that you know about Dr. Pepper's Cherry Dessert Topper, I'll swing back to the Dr. Pepper flavor I mentioned before: Dark Berry. On May 1, 2019, Dr. Pepper released its Dark Berry flavor, and it sounds delicious. According to the company, the limited-edition sip boasts flavors of black cherry, black currant, and blackberry. Plus, it's sold in dark blue packaging to reflect the new flavors.

If you take a close look, those Dr. Pepper Dark Berry cans and bottles also feature a logo for the upcoming movie, Spider-Man: Far From Home (as seen here). Apparently, the flavor was released to honor the film, which is set to hit theaters in July 2019. With that being said, it's safe to say that you'll be able to sip on Dark Berry up until then.

Between Dr. Pepper's Cherry Dessert Topper and Dr. Pepper Dark Berry, you'll be set on the soda front. TBH, each option is perfect for summer, whether you're decorating your ice cream sundae or sipping on the berry-flavored beverage.