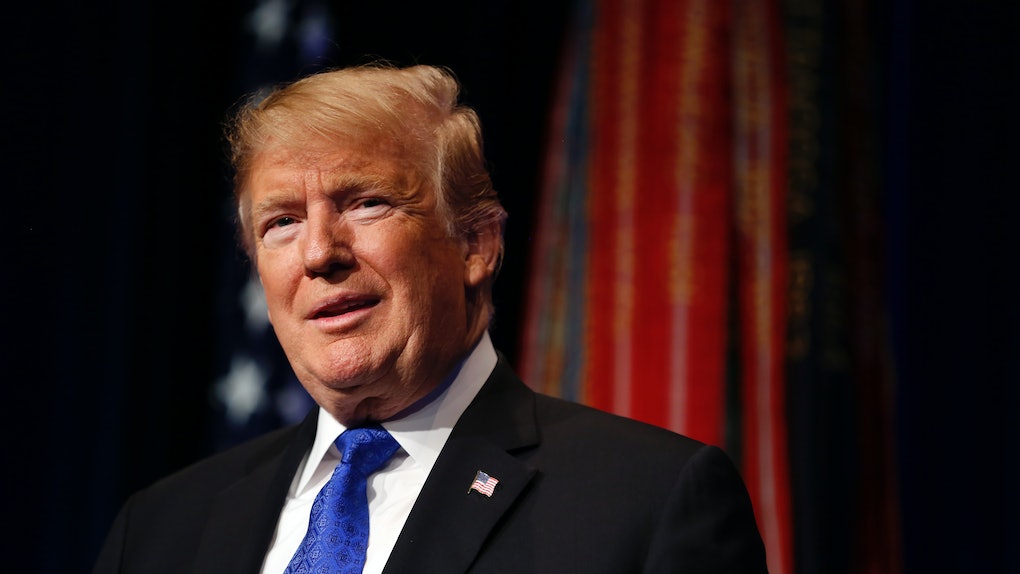 You knew it was coming. President Trump has finally weighed in on the controversial encounter between the Kentucky high school students and the Native American elder, and it's just what you'd expect it to be. Donald Trump's tweet supporting the MAGA teens said they were "treated unfairly" and said that they were smeared by the media. Oof. Elite Daily reached out to the White House for any additional comment on his tweets, but did not hear back by the time of publication.

For context purposes, let's quickly recap what inspired his tweets. On Friday, Jan. 18, video surfaced of a group of students from Kentucky's Covington Catholic high school — many wearing "Make America Great Again" hats — appearing to taunt a man named Nathan Phillips, an Omaha elder, as he sang and drummed in Washington D.C. The students were apparently in the city for the anti-abortion rally, March for Life, while Phillips was there for the Indigenous Peoples' March. The video went viral, leading to widespread criticism of the boys.

But on Monday, Jan. 22, additional footage emerged, showing the encounter followed another with a group of Black Hebrew Israelites, who, as The Washington Post puts it, "believe black Americans are God’s chosen people." Apparently, the group started hurling insults at the teens and some back-and-forth ensued, to which Phillips intervened, singing and beating his drum, in an attempt to diffuse the situation.

With more details in the open, particularly that the Israelites may have instigated the entire encounter, many have rescinded or questioned criticism of the students. In separate statements, both Phillips and Sandmann also offered more details of what, they say, transpired during the encounter (more on this later). Elite Daily reached out to the Black Israelites for further comment on the matter, but did not hear back by the time of publication.

In a tweet shared on Jan. 21, Trump said the students — including Nick Sandmann, who faced off with Phillips — were "treated unfairly with early judgements proving out to be false" and that they were "smeared by the media." In another, shared on Jan. 22, the president took aim at the media again, tweeting that the teenagers "have become symbols of Fake News and how evil it can be." Elite Daily reached out to the White House for any additional comment on his tweets, but did not hear back by the time of publication. But for all the backlash, Trump added, "They have captivated the attention of the world, and I know they will use it for the good - maybe even to bring people together. It started off unpleasant, but can end in a dream!"

His son, Donald Trump Jr., also weighed in on the matter (because, of course). During a chat on Fox News' The Ingraham Angle, Trump Jr. said the media "had to pounce" on the students because the idea of racist, pro-Trump teens harassing a Native American was just too good, NBC News reported. Speaking to host Laura Ingraham on Jan. 21, he said, "They want a bunch of nice Catholic kids — happen to be white — they want them to be the enemy." The Trump Organization did not immediately return Elite Daily's request for further comment.

For his part, Sandmann issued a statement on Jan. 20 saying that the situation was taken out of context. The statement said that he and his peers weren't taunting Phillips, but were using their "school spirit chants to counter the hateful things that were being shouted at [their] group [by the Israelites]." Sandmann also said he was "startled and confused" as to why Phillips approached him and started playing his drum in his face, adding that he felt singled out for a confrontation, although he "was not sure why." However, he concluded the statement saying he has no "ill will" for Phillips and that he doesn't harbor hateful feelings for Native Americans or African Americans.

But Phillips offered comments that contradict those remarks. Speaking to the Detroit Free Press the same day, the elder said the students hurled insensitive and racist comments such as "'build that wall" and that they had a "mob mentality." As for his attempt to quell arguments between the students and the Black Hebrew group, Phillips said, "These young men were beastly and these old black individuals was their prey, and I stood in between them and so they needed their pounds of flesh and they were looking at me for that." But he did admit the Israelites had indeed hurled some disturbing comments and that one of them even spat toward the other group.

Hmm. Something tells me that this isn't quite over and if that's the case, expect to see more tweets from the president. We'll see.