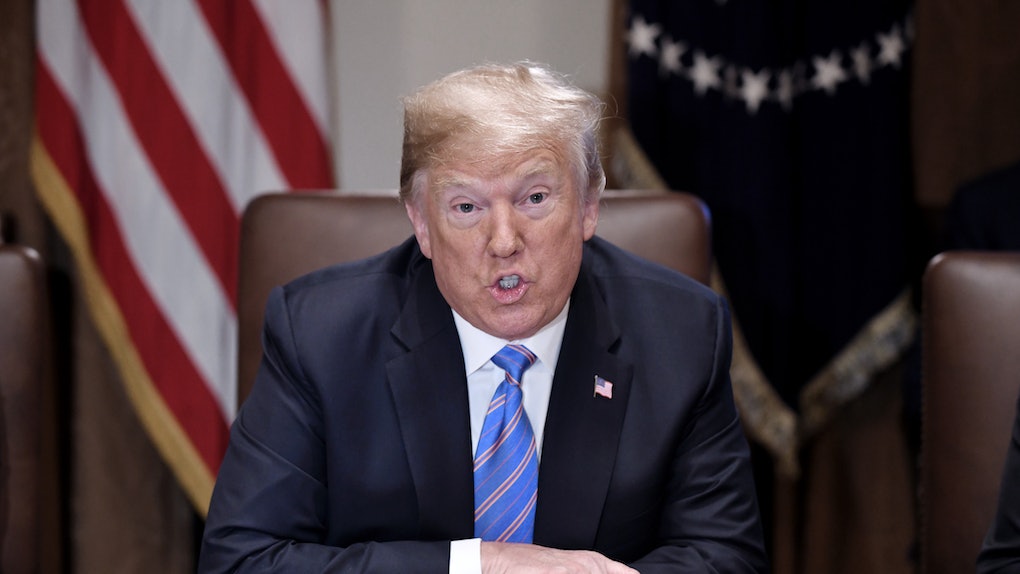 After President Donald Trump met with Russian President Vladimir Putin in Helsinki on July 16 — a meeting everyone's still trying to make heads or tails of — he faced some backlash for his comments that appeared to be a little too credulous of Putin's denials about Russia meddling in the 2016 presidential election. In response to the criticism, Trump took a shot at Hillary Clinton, but Donald Trump's tweet about Hillary Clinton and Russia missed the point entirely.

It's no secret that Trump is a fan of using Twitter to to call out the "fake news media." This time, though he went back to the 2010 well and dug up a video of Clinton talking about Russia. He tweeted it out on July 19 and wrote, "Will the Dems and Fake News ever learn? This is classic!"

The clip is from a 2010 interview with First Channel Television which, according to The Hill, is partially owned by the Russian government. In it, Clinton said a "strong Russia" is "in the interests of the world." She said,

We want very much to have a strong Russia because a strong, confident, prosperous, stable Russia is, we think, in the interests of the world.

But there's a lot of context missing. According to The Hill, Clinton was responding to a question on whether America's place in the modern world is a force "aimed at supporting the world’s equilibrium? Or is it a force aimed at changing the status quo?”

The full response that Clinton gave was that the U.S. is there to keep the status quo when it allows "countries and individuals to progress." Here's the full quote:

It is a force to sustain an equilibrium that permits countries and individuals to progress, to become more self-realizing. I mean, we want very much to have a strong Russia because a strong, competent, prosperous, stable Russia is, we think, in the interests of the world. But at the same time, there are countries and places where the status quo is just not acceptable. Last summer, I went to the Democratic Republic of Congo. I went to Eastern Congo where 5.4 million people had been killed in the last 15 years, the greatest death toll since the Second World War. We don’t want that status quo to be sustained.

Trump, I can only assume, meant to use the footage to show that while the news is calling him out over the summit with Putin, they ignored Clinton speaking highly of Russia. But it doesn't help his case, because it leaves out the full context. Clinton was speaking to a Russian audience on a Russian television station, portraying America as a guiding force that allows other countries — including Russia — to progress and move past the versions of the status quo which she calls "not acceptable." That's pretty different than what Trump has said.

All eyes were on Trump and Putin during their meeting in Helsinki on July 16, in which they discussed U.S.- Russia relations, cybersecurity, the 2016 election, and the disarmament of North Korea. During a joint press conference meant to cover what the two foreign leaders discussed during their prior closed-door meeting, Trump spoke strongly in support of Russia, but said little positive about the United States. During the Helsinki conference, Trump put blame on the United States for its poor relationship with Russia, and implied he believes Putin's claim that there was absolutely no Russian meddling in the 2016 election — despite the fact that according to U.S. intelligence community's consensus, it totally did. Trump was so friendly towards Russia that #TreasonSummit was even trending on Twitter during the press conference.

In short: the backlash Trump's facing since his meeting with Putin is of his own making. What that has to do with Clinton's 2010 interview, I really have no idea. All I know is, Trump, your tweet totally missed the point. Better luck next time.