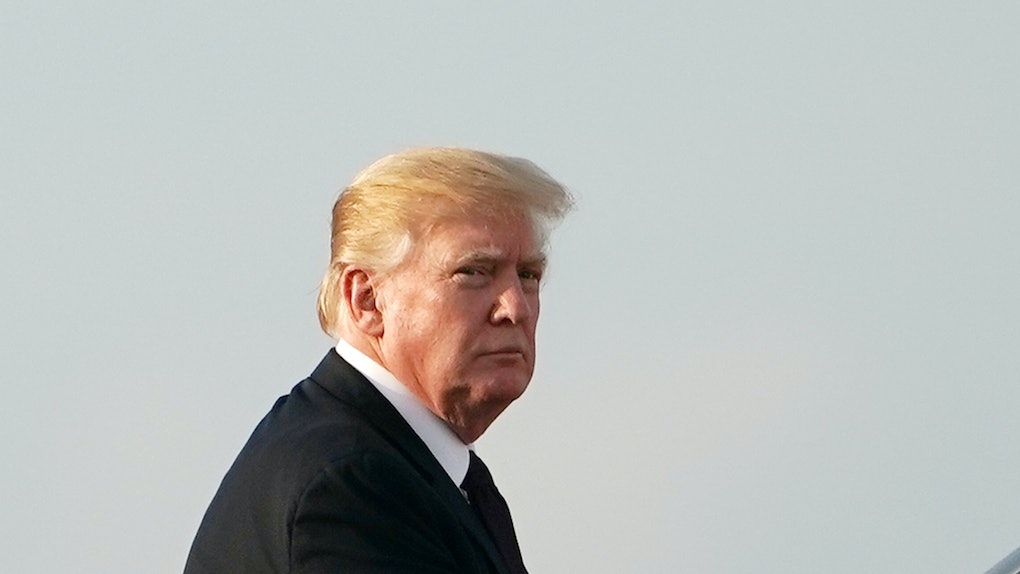 On Thursday, Nov. 28, people across the United States gathered with loved ones and enjoyed some classic Thanksgiving Day dishes. No matter if you're spending the holiday eating a feast, or relaxing at home, there's no wrong way to show gratitude. Well, clearly the president agrees, because Donald Trump's Thanksgiving Day 2019 tweet was a festive message for "all Americans" celebrating the holiday.

On Nov. 28, President Donald Trump took to Twitter to share a celebratory tweet in honor of Thanksgiving. To ring in the occasion, the POTUS shared a photo of himself and the First Lady from the turkey pardoning of this year’s birds “Bread” and “Butter," during which he referenced the ongoing impeachment hearing by joking that they'd already been "subpoenaed to appear in Adam Schiff’s basement on Thursday." Trump went for a more inclusive message as he captioned the image, “Melania and I wish all Americans a very happy and blessed Thanksgiving!”

For a lot of people, the holiday seasons means travel. President Trump is clearly no different. On Nov. 19, The Sun Sentinel reported that Trump would be spending Thanksgiving at his Palm Beach, Florida resort Mar-a-Lago, and plans to say until Dec. 1. Sound familiar? Well, that might be because Trump celebrated Thanksgiving 2018 at his Florida resort as well. The White House did not respond to Elite Daily's request for comment regarding the president's holiday plans.

While some people may believe Thanksgiving week is a time to relax, clearly Trump isn't slowing down. On Tuesday, Nov. 26, the president held a campaign rally for supporters in Florida, which started at 7 p.m. CT. While addressing the crowd, Trump shared an unconventional theory that members of the Democratic Party wanted to change the name of Thanksgiving.

Trump has one thing that he's probably not so thankful for, though. On Sept. 24, House Speaker Nancy Pelosi announced that the House was opening an official impeachment inquiry against Trump. In an emailed statement to Elite Daily, White House Press Secretary Stephanie Grisham referred to the inquiry as Democrats' way to "weaponize politics."

That hasn't stopped the House Intelligence Committee from holding a number of both closed-door and public impeachment hearings as a part of the process. As of Tuesday, Nov. 26, officials including Ambassador to the European Union (EU) Gordon Sondland, former National Security Council official Fiona Hill, State Department official for the U.S. Embassy based in Kyiv, Ukraine, David Holmes, Deputy Assistant Secretary for European and Eurasian Affairs, George Kent, Vice President Mike Pence's special adviser on Europe and Russia, Jennifer Williams, and Lt. Col. Alexander Vindman have all testified to the Intelligence Committee.

However, it looks like we can expect a pause in proceedings during the holiday weekend as Americans celebrate and give thanks before business goes back to normal next week.

More like this
These Tweets & Memes About Matt Gaetz's Venmo All Make The Same Joke
By Cianna Garrison
These Memes About "Putting Back" The Ever Given In The Suez Canal Are Everything You're Feeling
By Rhyma Castillo
Ivanka Trump's Women's Initiative Failed Inspection, & It's A Mess
By Rhyma Castillo
Stay up to date