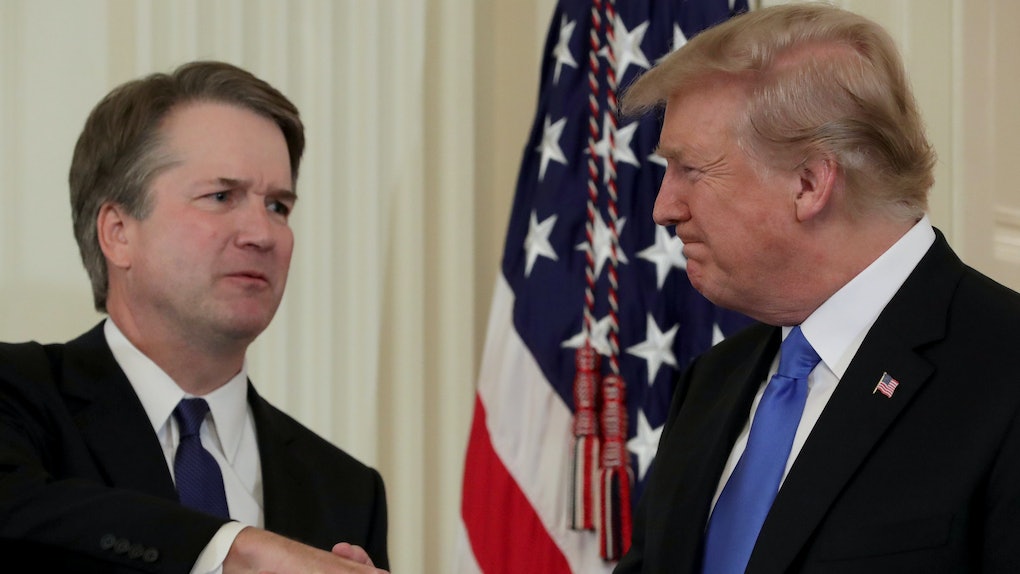 In a tweet on Saturday, Oct. 6, President Donald Trump wrote,

I applaud and congratulate the U.S. Senate for confirming our GREAT NOMINEE, Judge Brett Kavanaugh, to the United States Supreme Court. Later today, I will sign his Commission of Appointment, and he will be officially sworn in. Very exciting!

Previous to Saturday, the Senate passed a procedural vote on Friday, Oct. 5, with a tally of 51-49 in favor of moving toward the confirmation vote. All of this came following the respective testimonies of Christine Blasey Ford and Brett Kavanaugh on Thursday, Sept. 27. Ford alleged that Kavanaugh sexually assaulted her in the summer of 1982, when they were both teenagers in high school. Kavanaugh has denied these allegations, saying they are "completely false." Elite Daily reached out to Kavanaugh's team for further comment but did not hear back.

The FBI wrapped up its supplemental investigation into Ford's allegations on Thursday, Oct. 5. Although, it was reported that two key people who were left off the interview list: Kavanaugh and Ford. Elite Daily reached out to the FBI for comment on both parties not being on the interview list for their investigation, but did not immediately hear back.

Shortly after the FBI's findings were released, the White House's comment on those findings indicate that the White House believes there were no findings to corroborate Ford's allegations. White House Spokesman Raj Shah sent out a tweet on Thursday, saying that the investigation was very "comprehensive" and included "over half a million pages of documents." Shah then added that the White House is "fully confident" that the Senate will push Kavanaugh's nomination through. Elite Daily reached out to the White House for further comment on the report, but did not immediately hear back. Shah said in his tweet,

This is the last addition to the most comprehensive review of a Supreme Court nominee in history, which includes extensive hearings, multiple committee interviews, over 1,200 questions for the record and over a half million pages of documents. With this additional information, the White House is fully confident the Senate will vote to confirm Judge Kavanaugh to the Supreme Court.

From President Trump's reaction, it appears that he is thrilled to see his second Supreme Court pick confirmed to the highest court in the land.