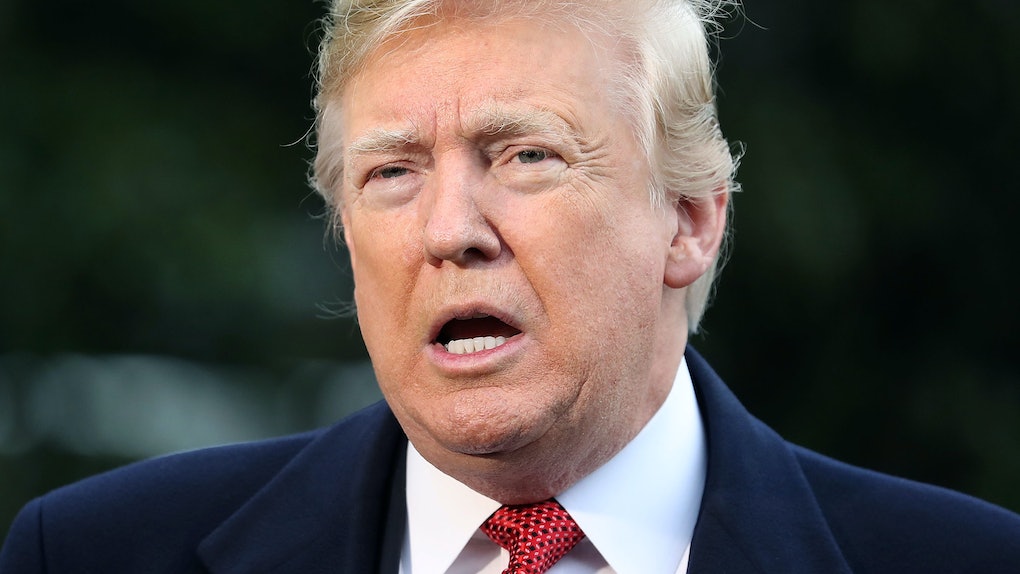 President Donald Trump isn't happy about comments former first lady Michelle Obama made about him in an upcoming book. In her highly anticipated book Becoming, set for release on Nov. 13, Obama said that she'll "never forgive" Trump for his role in the "birther" movement that plagued President Barack Obama throughout his tenure, and let's just say he isn't taking it lying down. He hit back at her for the comment on Nov. 9, and Donald Trump's reaction to Michelle Obama's memoir took shots at both her and his predecessor. Elite Daily reached out to Trump and Obama's teams for comment but did not hear back by the time of publication.

Speaking to reporters outside the White House on Friday afternoon, Nov. 9, Trump accused Obama for deliberately "trying to be controversial," seemingly implying that she only brought up the topic to sell books. He said:

I guess she wrote a book. She got paid a lot of money to write a book. And they always insist that you come up with controversial — well, I’ll give you a little controversy back. I’ll never forgive him [Barack Obama] for what he did to our United States military. By not funding it properly, it was depleted.

Trump added, “I’ll never forgive him for what he did in many other ways, which I’ll talk to you [reporters] about in the future.” Elite Daily reached out to the White House for comment and further clarification of Trump's response, but did not hear back by the time of publication. Representatives for the Obamas did not immediately respond to Elite Daily's request for comment.

Trump was responding to a lengthy excerpt from the former first lady's forthcoming book that was obtained and released by The Washington Post on Nov. 9. In the excerpt, she criticized Trump for promoting conspiracies that Barack, who was born in Hawaii, was a "secret Muslim" born in Kenya, where his father is from, and wasn't really an American citizen. It wasn't until 2016 that Trump finally admitted that Barack was born in the United States. For his role in the "crazy and mean-spirited" conspiracies, however, which Obama says put her family's safety at risk, she'll "never forgive" him. She reportedly wrote:

The whole [birther] thing was crazy and mean-spirited, of course, its underlying bigotry and xenophobia hardly concealed. But it was also dangerous, deliberately meant to stir up the wingnuts and kooks. What if someone with an unstable mind loaded a gun and drove to Washington? What if that person went looking for our girls? Donald Trump, with his loud and reckless innuendos, was putting my family’s safety at risk. And for this I’d never forgive him.

She also reportedly discussed some other wild moments related to Trump, such as the infamous 2005 Access Hollywood tape, in which Trump bragged about grabbing women by their genitals. Obama also brought up the strange 2016 moment when he infamously lurked then-Democratic presidential nominee Hillary Clinton during an election debate. At the time, the moment went viral, with many people accusing Trump of bullying and intimidation — which Obama echoed in the memoir, accusing Trump of using his body language to "stalk" Clinton.

He has yet to reply to those comments. But knowing Trump, a response is likely on the way. Keep a lookout.