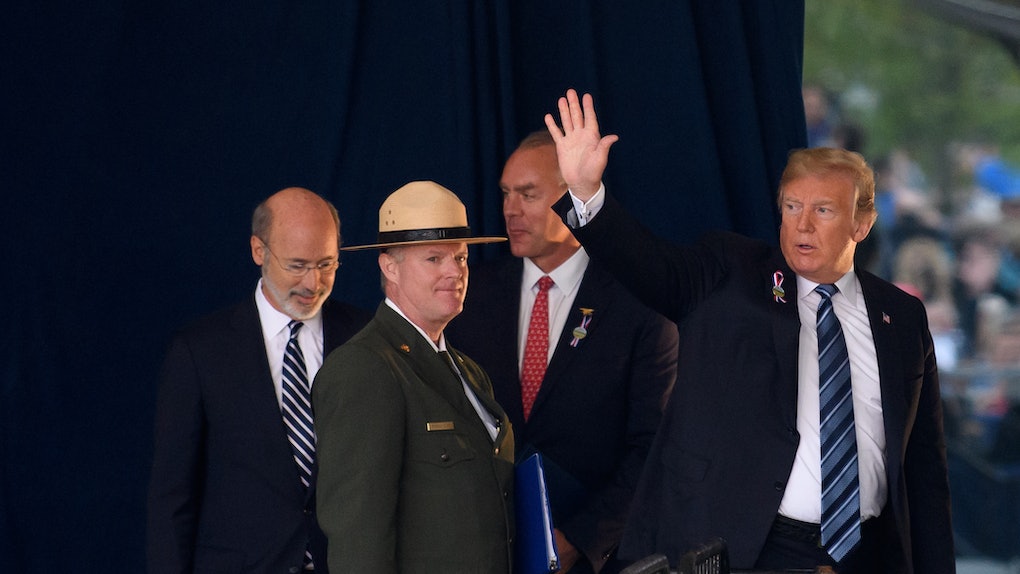 Donald Trump's Fist Pump Body Language Is Pretty Serious, According To This Expert

At a 9/11 memorial service on Tuesday, Sept. 11, the president stirred up controversy after he made what appeared to be a celebratory gesture. A video clip shows him walking toward a crowd after deboarding a plane and pumping both fists in the air as he arrived in Pennsylvania to remember the lives lost during the attacks 17 years ago. Awkward it may have been, but Donald Trump's fist pump is also pretty serious, according to body language expert Patti Wood. Elite Daily reached out to the White House for comment on the intention behind Trump's gesture but did not receive a response at time of publication.

The event was to memorialize the lives lost on United Airlines Flight 93, one of the four planes hijacked in the 9/11 terrorist attacks in 2001 that killed nearly 3,000 people total. The flight, which is believed to have been aimed at a target in Washington D.C., crash-landed in Pennsylvania after passengers fought back against the hijackers. Per People, White House press secretary Sarah Huckabee Sanders said in a statement ahead of the event that the president's focus for the day was "remembering the lives that were lost, and certainly honoring the individuals who were not only lost that day, but also put their lives on the line to help in that process."

But stated intentions aside, Wood was pretty clear in her assessment that the fist-pump gesture was anything but appropriate for the circumstances.

She points out a few key cues that make the gesture significant in her view. First — and strangely important — is the clapping. "Clapping is celebratory," she says, as well as preparatory. "A low-forward clap is typically what an athlete does to pump themselves up to go into the game, the clap after the huddle."

Wood also notes his arms as he goes for the fist pump. "His elbows go back pretty far before his arms go up and forward," she says. "That preparatory body language is like preparing for the event. Again, not standard body language to go into [an event like this]."

Finally, she notes how he seems to curl in and bite his lower lip — something fighters do before they go head-to-head. "It's a mouth guard that people automatically do, guys do especially, when they're about to punch somebody," she says. "It's subconsciously guarding teeth for battle."

She describes his overall expression as a "growl face" that typically denotes an intention "to terrify your opponent to put them off-balance." It might seem obvious, but this isn't exactly standard for what presidents do at memorial services, particularly on days of national remembrance for thousands of lives lost.

"In no way does that body language match what we think of as [appropriate for] the event," she summarizes. "It's like a prize fighter going into the ring knowing he's going to win."

I ask Wood what she thinks it might be that Trump is fighting for or winning at. Any ideas on that, she cautions, would just be speculation. But, she notes, "He's going into a crowd of his supporters. I believe that is, 'I'm going to show you that I'm fierce and I'm going to win.'" It's worth noting that the crowd, per the Circa video above, appears to be receptive at least to his presence, if not necessarily his fist-pumping.

Of course, one could look at what's been going on in the president's orbit lately to attempt to reason out what might've provoked that reaction. Between a White House fractured over the anonymous New York Times "resistance" op-ed on Sept. 5 that described an active effort to thwart the president, an ongoing FBI investigation into possible collusion between Trump's 2016 campaign and Russia that has ensnared several of his former campaign staffers, and a recent stream of tell-all books that paint damning portraits of the president and his office, Trump probably has plenty on his mind. But that's exactly why Wood thinks his behavior Tuesday is all the more worthy of consideration.

Wood explains that normally — and she's been reading body language for a long time — U.S. presidents don't act like this at a memorial for the anniversary of a national tragedy. What you'd typically expect to see from a president in this situation, she says, "is a slow pace of walking, a more head down body language, a more solemn face, a solemn smile … and open body language towards the people."

To clarify: It's not that a leader in this context shouldn't acknowledge a crowd, but she'd expect them to do so in a way that reflects more solemnity. At the least, she says, they'd appear more tapped into the gravity of the event that occurred, the lives that were lost, and empathize with their fellow Americans.

"Subconsciously, Trump's own concerns overrode what choices he could've made," she says. "His concerns with being alpha are taking precedence." In other words, you'd expect a leader, as the role demands, to put aside their own problems and be emotionally present for the matter at hand.