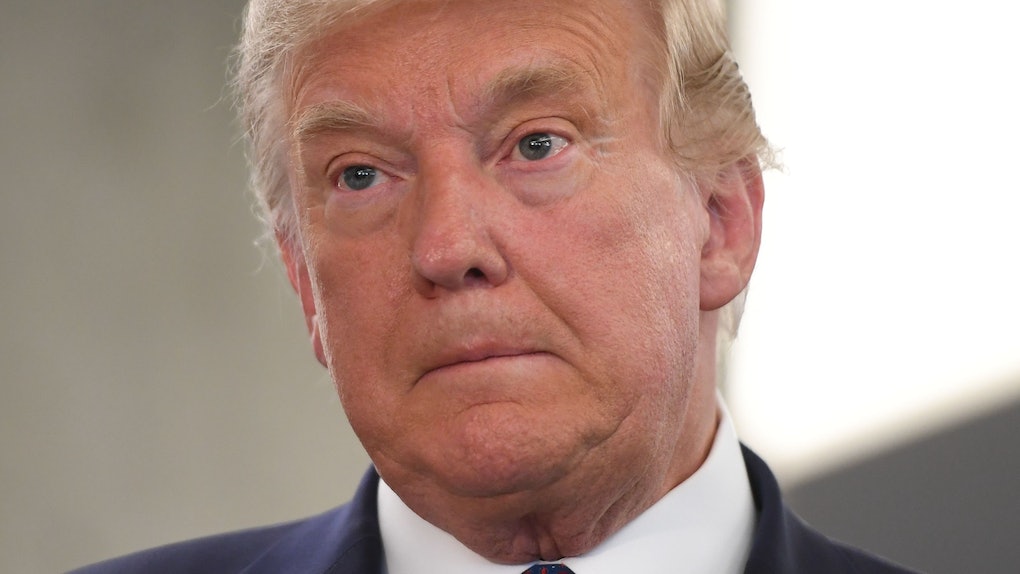 On Saturday, Nov. 7, results of the 2020 presidential election were finally announced, and former Vice President Joe Biden was the projected winner as of 11:30 a.m. ET. Following the announcement, President Donald Trump took to Twitter to address the news, and he continued to make baseless voter fraud claims. Trump’s first tweet after the 2020 election was called honestly won't surprise you.

The key turning point in the election came from Pennsylvania's 20 electoral votes, which brought Biden’s total up to 273. After several publications, including The New York Times, CNN, and the Associated Press, announced the call on the election, Trump was quiet on Twitter for a few hours. Then, just shy of 5 p.m. ET, Trump tweeted about the race in a tweet that read, "THE OBSERVERS WERE NOT ALLOWED INTO THE COUNTING ROOMS. I WON THE ELECTION, GOT 71,000,000 LEGAL VOTES. BAD THINGS HAPPENED WHICH OUR OBSERVERS WERE NOT ALLOWED TO SEE. NEVER HAPPENED BEFORE. MILLIONS OF MAIL-IN BALLOTS WERE SENT TO PEOPLE WHO NEVER ASKED FOR THEM!" Twitter has since marked the tweet with a note that says, "This claim about election fraud is disputed." A few minutes later, Trump tweeted again, writing, "71,000,000 Legal Votes. The most EVER for a sitting President!"

There is no evidence to support Trump's claims of mail-in ballot fraud, which have been widely debunked. Back in late September, the director of the Federal Bureau of Investigation (FBI) told Congress the FBI saw no evidence of a “coordinated national voter fraud effort," per The New York Times.

When the results shifted in Biden’s favor, Trump began making claims of ballot fraud on Twitter by inaccurately referring to valid mail-in ballots as fraudulent. On the morning of Wednesday, Nov. 4, he wrote, “Last night I was leading, often solidly, in many key States, in almost all instances Democrat run & controlled. Then, one by one, they started to magically disappear as surprise ballot dumps were counted. VERY STRANGE, and the 'pollsters' got it completely & historically wrong!” Twitter later marked this tweet as misleading and containing disputed information.

Trump continued to make baseless claims of voter fraud on Thursday, Nov. 5, so it's really no surprise his post-election message followed suit. Now that the race has been called and Trump shows no plans to concede, it's likely his campaign will continue filing lawsuits, most of which have already been thrown out.