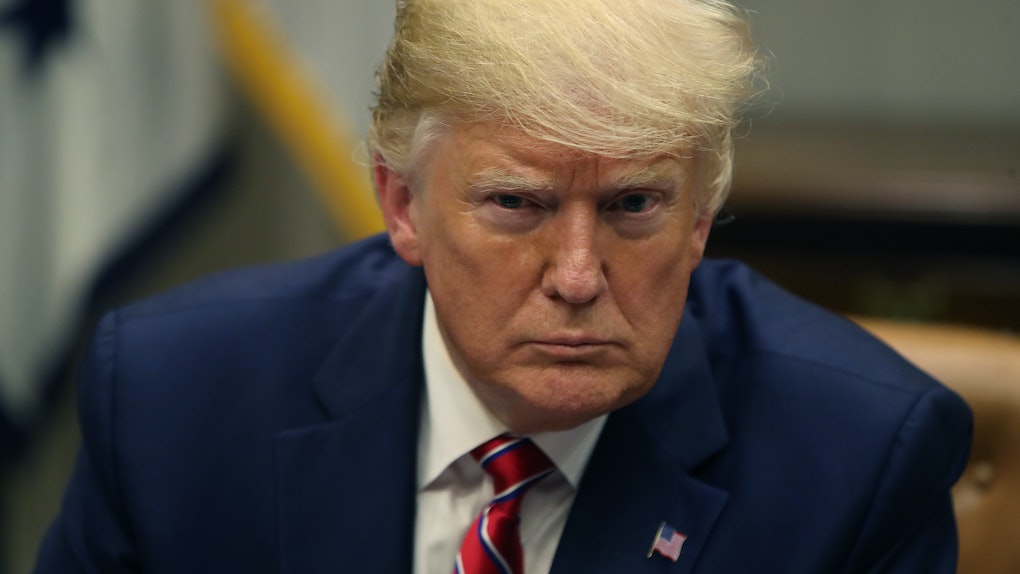 Donald Trump's Father's Day 2019 Tweet Is A Lot To Handle

Sunday, June 16 marks Father's Day in the United States, and, as you do in the age of social media, people everywhere are sending well wishes to dads online. Even President Donald Trump shared remarks via Twitter on Sunday, but the president's tweet might have a stronger tone than most Father's Day messages. After reading it, you'll probably see why Donald Trump's Father's Day 2019 tweet is kind of a lot to handle.

Of course, you know by now that President Trump is fond of sharing his thoughts on Twitter, so it might not come as surprise that he shared a message for the fathers on the social media platform on Sunday morning. What might be a little shocking is the language used in the message shared in honor of the holiday, as it seems the president may have had more than a just simple Father's Day message in mind. In the tweet, Trump wished a happy Father's Day "to all" and to his "worst and most vicious critics," writing:

Happy Father’s Day to all, including my worst and most vicious critics, of which there are fewer and fewer. This is a FANTASTIC time to be an American! KEEP AMERICA GREAT!

TBH, it's kind of a lot to take in, considering you don't usually see the words "vicious" and "critics" in most Father's Day messages, but it seems like the president used this message as a chance to address what he thinks are unfair evaluations of his presidency. The president also used his message to include a nod at his 2020 campaign by closing with, "KEEP AMERICA GREAT!" which will be the slogan for his re-election campaign, per CNN.

As for Father's Day wishes coming in for the president, his daughter Ivanka Trump shared a two tributes to her father on Sunday morning. Taking a more relaxed tone than Trump's tweet, Ivanka's first Father's Day post includes photos of Jared Kushner, her husband and Trump advisor, and Trump walking around the White House. Her short message on Instagram read:

Happy Father’s Day to these two incredible Dads and to all of the amazing fathers out there who have earned today’s celebration!

Ivanka's second tribute for her father was a tweet commemorating Trump's decision to run for president of the United States, which he announced on June 16, 2015.

She wrote, "Four years ago today, I introduced my father [Donald Trump] when he launched a Campaign that would forever change America. Because of his courage, Americans are safer and more prosperous...and the best is yet to come! Happy Father’s Day!"

As of publication, first lady Melania Trump, Donald Trump Jr., Eric Trump, and Tiffany Trump had yet to share Father's Day wishes for the president, so you can keep an eye out for what kind of well wishes they might send throughout the day.

Trump also shared a more uplifting message about Father's Day with his 2019 "Proclamation on Father's Day," which was posted on June 15. In it, he praises "the men who have embraced the essential role of fatherhood." Leaving politics out of the closing statement, the proclamation reads, "We express our heartfelt love and appreciation to fathers, whether their children are by birth, adoption, or foster care, for the many sacrifices they have made to ensure that their children have every opportunity to reach their full potential in life."

While Trump's tweet about Father's Day might be more intense than you'd expect, you can always look to the official proclamation for a more traditional Father's Day message.

More like this
These Tweets & Memes About Matt Gaetz's Venmo All Make The Same Joke
By Cianna Garrison
Ivanka Trump's Women's Initiative Failed Inspection, & It's A Mess
By Rhyma Castillo
The More Contagious B-117 COVID Variant Is Now The Most Common Strain In The U.S.
By Rhyma Castillo
Stay up to date