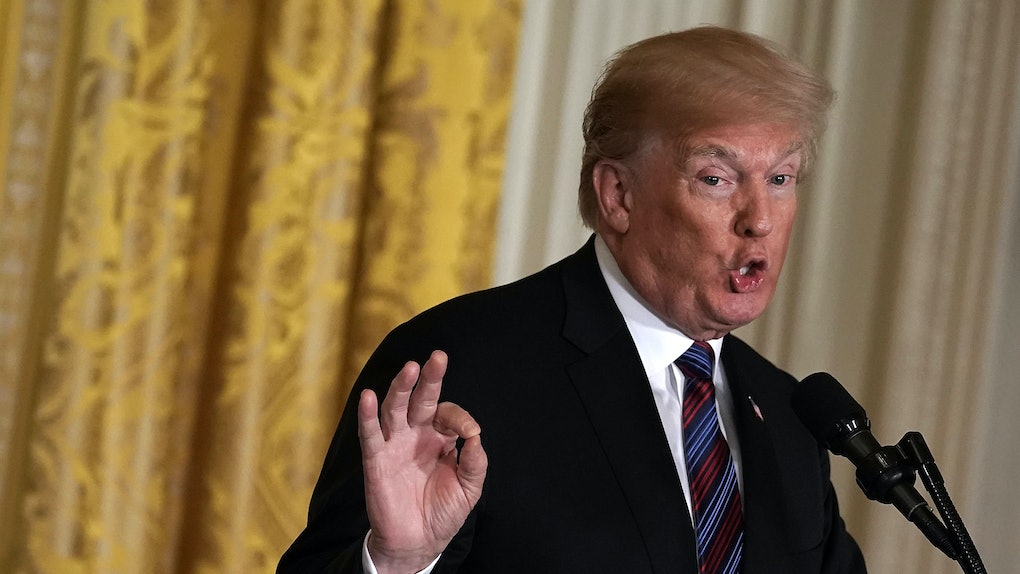 We've all heard about President Donald Trump's much-desired wall along the U.S.-Mexico border, which he intends to strengthen security measures and prevent undocumented immigrants from entering the country. Although plans for the wall have yet to be detailed, Trump is now exhibiting his executive power capabilities with this latest announcement. Donald Trump wants the military to guard the border while a wall is built, so this country is essentially heading down a dystopian road here. Great.

On April 3 while meeting with Defense Secretary Jim Mattis and visiting leaders of Baltic nations at the White House, Trump told reporters that he intends to send the military to guard parts of the country's southern border from undocumented immigrants, greatly heightening the security that is already in place. How exactly the president will orchestrate this mobilization of our troops wasn't mentioned, but he clearly stated his intent and indicated that plans are already in the works. According to The New York Times Trump said,

Why does this president think an "iron fist" style approach to tacking the immigration issue in this country is the only viable option? I mean, the visual of armed military troops guarding a stretch of border is straight out of some kind of Hunger Games knockoff or zombie thriller. I understand that toughness is sometimes necessary in politics, but do we have to get all Walking Dead about it?

It also seems a bit excessive, since the president's suggestion military protection along the border is apparently in direct response to news of a caravan of Central American immigrants — including women and children — who are reportedly traveling through Mexico on foot to seek asylum in the United States. BuzzFeed News originally published a report on March 30 which detailed the accounts of the large group of mostly Honduran migrants, many of whom are fleeing poverty, political unrest, and violence in their home countries.

The president has also recently indicated that he's planning to be tougher on border security. While spending the Easter holiday down at Mar-a-Lago in Palm Beach on April 1, the president tweeted about the need to increase security along the border, as well as threatened to pull out of the North American Free Trade Agreement (NAFTA) should the Mexican government not toughen up their immigration laws as well. Trump said in the tweet,

Mexico is doing very little, if not NOTHING, at stopping people from flowing into Mexico through their Southern Border, and then into the U.S. They laugh at our dumb immigration laws. They must stop the big drug and people flows, or I will stop their cash cow, NAFTA. NEED WALL!

In a separate tweet the president said that the situation is getting "Getting more dangerous. 'Caravans' coming. Republicans must go to Nuclear Option to pass tough laws NOW."

Clearly, Trump has taken it upon himself to go the "nuclear" route and will apparently send his troops, in a move that would fiercely demonstrate his executive power as commander-in-chief. This could be the most dramatic executive order that we've seen the president make to date, should it actually happen. With migrants and the president heading towards a showdown, we might soon find out the president's decision in the next coming days.