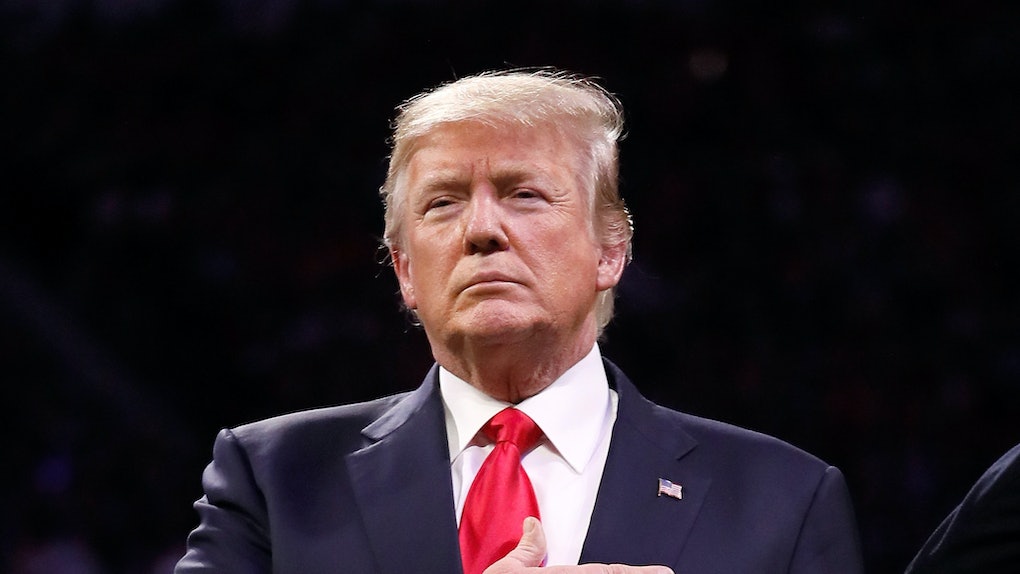 Donald Trump & Marla Maples Were Both At The Alabama-Georgia Game, & That's Awkward

For most of us, it’s pretty inevitable that you’re going to run into an ex at some point. You usually have mutual friends, you’ve gotten used to going to certain places and hangouts, and hey, it’s just a small world. But generally, if your ex is the president of the United States with his location more or less a public matter, you’d think it would be easy to avoid him. Which leaves me wondering why on earth were Donald Trump and Marla Maples both at the Alabama/Georgia playoff game on Jan. 8? I mean, you each literally have the rest of the world to be in, anywhere but at the same game at the same time.

A few days before the game, CNN reported that the president would be attending the college football playoff game between the University of Georgia Bulldogs and the University of Alabama Crimson Tide, held at Atlanta's Mercedes-Benz stadium. It's the first sports event he's seen in person since taking office, according to CBS News, and he joined ROTC students on the field during the national anthem, putting his hand over his heart and mouthing (some of) the words along with the crowd.

A crowd which apparently included his second wife, Marla Maples. Maples posted an Instagram video shortly after the start of the game, showing players running onto the field to a cheering crowd as she swivels the camera around to show her smiling face. The video, which is location tagged to Mercedes-Benz stadium, is captioned,

Home with my @ugaathletics with flashbacks of 1980 #GoDawgs#NationalChampionship Ready for another win!

So, she's definitely there. And judging from both her video and the photos of Trump, tucked away in a box surrounded by ROTC members and accompanied by politicians, she's definitely not attending as a guest of her ex.

Ironically, her ex-husband is on the other side. No, literally. Trump is viewing the game from a box above the Alabama crowd, across the field from where Maples is presumably sitting among the Georgia fans. So they are, in theory, face to face. Awkward.

OK, to be fair, the chances of them running into each other are pretty vanishingly small. For one thing, that stadium holds up to 75,000 people. For another, Trump is, you know, surrounded by Secret Service. It's not like they're going to bump into each other in line for nachos at halftime.

It's not unexpected that Maples, who divorced Trump in 1999, would be at this game. The former Mrs. Trump attended the University of Georgia (before dropping out to pursue acting and modeling), so this is her home turf and home team, as evidenced by her enthusiastic hashtags. She's also pretty connected to her home state, at least nostalgically — she was a contestant for Miss Georgia in the 80s, after dropping out of college. She's also, as an ex-Trump, carrying a much lower profile than her one-time-husband and thus gets to enjoy a little anonymity, chilling in the stands with the other fans.

Because President Trump sure didn't. His arrival at Monday night's playoff game was met with protests and anger, not least of all for the fact that Trump once called Atlanta "falling apart" and "crime infested." The Atlanta chapter of the NAACP urged people to bring a white towel to wave to simulate a blizzard (a reference to the political right's habit of calling their opposition "snowflakes"), according to CNN. A group called Refuse Facism ATL also reportedly organized a "take a knee" protest outside the stadium. (Trump's bugbear of football players protesting during the national anthem didn't have a chance to come to pass — players stayed in their locker rooms during the anthem).

So as far as awkward encounters with your exes go, this one's not so overwhelming. Just be careful who you get in line behind for the nachos.