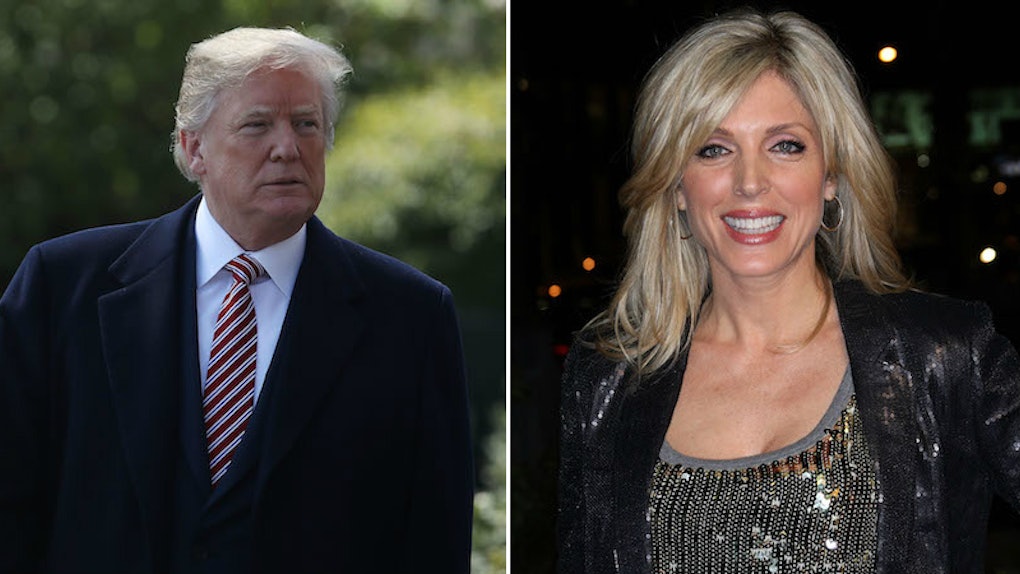 President Donald Trump has weathered three marriages, the third of which is with first lady, Melania. At the tail-end of his first marriage, which was probably before you were born, Trump and his to-be second wife, Marla Maples, made headlines in the early '90s for a high-profile affair. Nostalgia is in right now, so here are eight things you didn't know about Trump's relationship with Maples.

But first, a brief timeline is necessary for context. Trump married his first wife, Ivana Zelníčková, a Czech model who had fled the Communist country during the Cold War, in 1977. Ivana later became vice president of interior design for the Trump Organization, and was reportedly responsible for the design of Trump Tower. Donald Jr., Ivanka, and Eric, are Trump's three children with Ivana.

Then there's the wholesome 1989 affair President Trump had with actress Marla Maples, which became public after Trump attempted to bring Maples on a family vacation to Aspen, but unsuccessfully hid it from Ivana. Maples reportedly infamously approached Ivana during their family vacation and said, "I love Donald. Do you?" Ivana told Barbara Walters about this reported incident on a 1991 episode of 20/20.

In October 1993, Maples gave birth to a daughter, Tiffany, and the couple wed two months later. The marriage lasted six years before ending in divorce, and Maples raised Tiffany on her own in California.

For those keeping score, that's three marriages, two divorces, five children, one child out of wedlock, for the dude who won the evangelical vote.

There are, however, several things you probably didn't know about the Trump-Maples saga, even with all its tabloid infamy.

1. The way they met was straight out of a rom-com.

Vanity Fair described the way Trump and Maples met as a "meet cute." On Madison Avenue one afternoon Trump reportedly bumped into Maples, and the two got to talking in 1989.

“I had seen him at different places throughout the years,” Maples told Vanity Fair, “and just said hello, I was just somebody he shook hands with.”

2. Maples' famous "best sex I've ever had" quote is in dispute.

In 1990, the New York Post printed a headline that suggested Maples said that being intimate with the future president was “the best sex I’ve ever had.”

“That was meant to be private,” she told Page Six in February of this year, referring to the Post’s classic front-page headline in 1990.

“I never said that, someone else said that. [But] is it true? I’m not going to talk about that. The truth will come out, just not here,” Maples said, winking at a Post reporter on her way to jury duty in Manhattan.

Hours of Howard Stern audio that leaked in 2017 revealed that Trump was surprised to learn Maples was pregnant, according to Newsweek.

“I’m glad it happened. I have a great little daughter, Tiffany,” Trump told Stern in a 2004 interview. “But, you know, at the time it was like, ‘Excuse me, what happened?’ And then I said, ‘Well, what are we going to do about this?’ [Marla] said, ‘Are you serious? It’s the most beautiful day of our lives.’ I said, ‘Oh, great.’”

4. Maples' father wrote a country song about the Donald-Marla drama.

In response to the extensive tabloid news coverage of Trump and Maples affair, marriage, and then divorce, Maples' father reportedly wrote a country-western song called “Look At Us Now.” It doesn't seem to have made its way onto the Internet yet, sadly.

5. Maples was quoted as saying that they divorced because she "couldn't change him."

"I thought that I could change him. But he won’t change ... After I became a mother I was less willing to put up with his behavior," she was quoted by the Post as saying in an interview with The Daily Telegraph in London.

The Post reported that a spokeswoman of Maples' saidThe Daily Telegraph took Maples' comments out of context. The spokeswoman did not offer a specific misquote, however, The Post said.

6. Trump shared this ridiculous response in 1994 on the moment Maples met Ivana.

In a 1994 ABC interview with journalist Nancy Collins, Trump noted that there was "some friction" between Ivana and Maples during that trip to Aspen, Colorado in '92. Then, he ridiculously fat-shames some dude from Colorado before making the point, "Well, these two women are arguing about me but at least I'm getting laid."

A man who was standing right next to me, who weighed about 350 pounds and wasn't a very attractive guy, said to me, 'It could be worse, Donald. I've been in Aspen for 20 years and I've never had a date.' And I'll never forget the statement. And it sort of lightened it up for me a little bit. I'm saying, you know, 'I guess it could be worse.'

7. Before Trump was elected president, Maples told 'The View' that he was a good father to Tiffany.

In one of her more recent media appearances, Maples told The View in March 2016 that Trump is still "the father of my child" and that he put her through a lot of "great schools."

So I guess there's that? With Trump in the White House and Maples still living in California, they hardly seem to cross paths anymore. Maybe that's for the best.

More like this
This FUNBOY x Malibu Barbie Float Collection Features The Cutest Retro Designs
By Daffany Chan
Thomas' English Muffins' Cinnamon Bun Flavor Is A Sweet Breakfast Mashup
By Daffany Chan
Can You Blur Your Zoom Background On Your Phone? Here's The Deal With This Clutch Feature
By Lara Walsh
Stay up to date