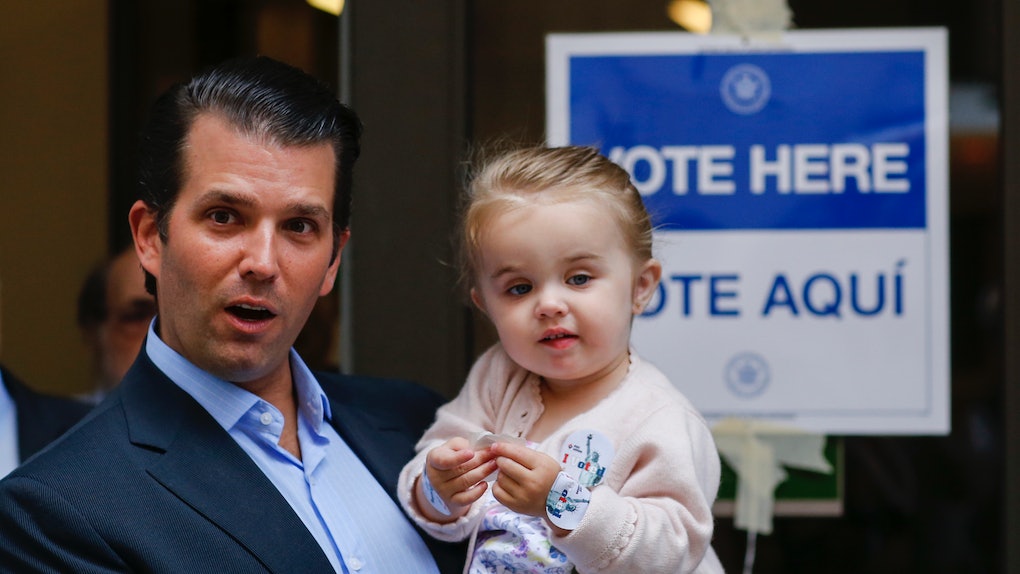 On Halloween night, Donald Trump Jr. posted a tweet to share a lesson he aimed to "teach" his daughter. Twitter, in turn, responded by taking turns slapping around that tweet like a piñata. It all started with Trump Jr.'s Halloween tweet featuring a photo of three-year-old Chloe Trump looking at a camera with a bucket of candy. The eldest son of President Donald Trump attached a caption to the picture that read, "I’m going to take half of Chloe’s candy tonight & give it to some kid who sat at home. It’s never to early to teach her about socialism."

The message resulted a tens of thousands of reactions, with over 50,000 people responding and many more sharing and "liking" the tweet. Among those who responded were notable figures from both the politic and entertainment spheres, like Harry Potter author J.K. Rowling.

"Fill her bucket with old candy left by her great-grandfather," Rowling wrote, "then explain that she has more because she's smarter than all the other kids."

"When I was 5, I ran a high fever on Halloween & stayed home," Stevenson tweeted. "A neighbor gave me half her candy, teaching me the value of compassion & generosity."

Other responses were less methodical, like the reply from conservative commentator and writer Bill Kristol. Kristol wrote, "why not give half a thought to the less fortunate? It’s never too late for adults to learn not to be smug about being born on third base."

Like Kristol, other people went out of their way to slap around Trump Jr.'s tweet and Trump Jr. himself (metaphorically, at least). There was singer John Legend who replied to Trump Jr., "you teach her about nepotism and fraud everyday. I guess it’s good to teach socialism to mix it up." Then there was journalist Soledad O'Brien, who replied, "you could TELL her you're donating the candy to charity, but then really funnel 100k of it to yourself. (Ask Uncle Eric about that!)"

What do the kids say? Get you somebody who can do both?

Meanwhile, actor Zach Braff seemingly aimed to be as blunt as possible: "She was given candy for free. You inherited all your money. You met with Russian spies. It’s 'too'."

I mean, that just about cover all the bases.

To be fair to Donald Trump Jr., the Halloween tweet was at least better than his last candy-based analogy, when he used Skittles to make a half-baked point about "our Syrian refugee" problem. That's about the only good thing you could say about the tweet though, otherwise it was so lame in so many ways.

First of all, the post wasn't even close to being funny. Being distasteful is one thing, but being distasteful without any good humor? Nah man, you can't get away with that. This is especially true when you consider that Twitter has shown a capacity to respect all things funny.

You think we wanted to give Ted Cruz a golf clap when he put Deadspin in a body bad? No, but you have to respect funny. Them's just the rules on these here internet streets.

Another thing: The poor girl looks like she has no idea what's going on. Instead of just showing off how she looked for Halloween, Trump Jr. just had to use that terrible angle just to show the bottom of a bucket in order to make and even more terrible point.

You know how hard you have to try to mess up a picture of a cute kid? What a waste.

Lastly, who was even talking about socialism? Like, why would the president's son make such a try-hard reach on a subject that isn't even trending, as if the biggest news of the week isn't the Russia investiga— oh.