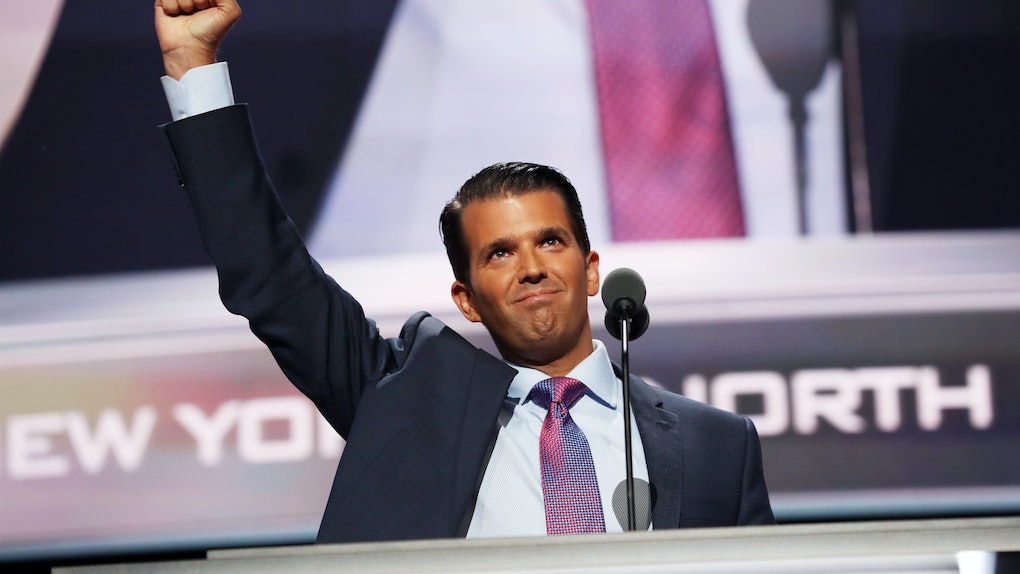 What's the phrase? Don't dish it if you can't take it? That couldn't be any truer at the moment. In the wake of a massive alleged college admissions cheating scam that allegedly involved at least 50 people, including, according to reports, two well-known actresses, Donald Trump Jr. took to Twitter to mock the scandal, but he probably didn't get the response he expected. I mean it — Donald Trump's Jr. comments on the college admissions scandal seriously backfired.

But first, for those who missed it: On March 12, it was reported that a number of people had been implicated in an alleged scam to bribe and lie their kids' way into elite colleges. Following the allegations, Elite Daily reached out to the U.S. Attorney's Office of the District of Massachusetts, which is leading the case and brought the indictments forward, for comment, but did not hear back. Among those accused are Full House actress Lori Loughlin and Felicity Huffman. A representative for Loughlin said she "does not have any information to share" in response to Elite Daily's request for comment, while Huffman's representatives did not return Elite Daily's request for comment.

After the allegations broke, a lot of people weighed in on the scandal, discussing issues of privilege in education, wealth disparities, and the way that wealthy students have access to resources that other students don't. Reacting to the news, Trump Jr. shared not one, but two tweets mocking the situation, and apparently, those allegedly involved. In one, he wrote:

Is it just me or is everyone in Hollywood strangely silent today?Come on guys you’re always very vocal in forcing your opinions on everyone… What changed?

According to parenting advice website Fatherly, he also reportedly mocked Huffman's past tweets, including a now-deleted one from 2016 that read, “What are your best ‘hacks’ for the back-to-school season?” Huffman's Twitter account has since been taken down. Trump Jr. responded, “I’m learning some new ones as we speak. Stay tuned.” Elite Daily reached out to the Trump Organization for comment on his tweets, but did not hear back by the time of publication.

I'm not sure what Trump Jr. has against Aunt Becky, but OK, I guess. Trump Jr. may have been trying to lay a burn on Huffman and Loughlin, but joke's on him, because Twitter users quickly shot back with criticism over his admission to a school that President Donald Trump has reportedly made some rather, um, significant donations to. The White House and representatives for Trump Jr. did not immediately respond to Elite Daily's request for comment on the subject of the admission and reported donation.

"Suddenly remembering that string of pledges by your father to Penn/Wharton in the 1990s — totaling at least $1.5 million — that coincided with the 1996 and 2000 enrollment there of you and Ivanka respectively," journalist Tim O'Brien tweeted to Trump Jr.

A lot of people had some... questions... on the subject.

The president and his family haven't been accused of any crime involving college admissions, but, as The Washington Post puts it, "news reports and investigations suggest the Trumps used money and connections to ease their access to top schools." Which is totally legal, for what it's worth.

While the amounts are unclear, it's been reported that the now-president started donating to the University of Pennsylvania around the time Trump Jr. started classes there in 1996 and when Ivanka Trump started there in 2000. Estimates suggest he donated around $1.4 million to the school. Elite Daily reached out to the university for confirmation or comment, but did not immediately hear back.

But that's not it. Biographer Gwenda Blair wrote in 2001 that Trump Sr. was only admitted to the University of Pennsylvania's Wharton School (after transferring from Fordham University) — as a special favor from an admissions officer who knew his brother, Freddy, per The Daily Pennsylvanian. The White House did not immediately return Elite Daily's request for comment on the college acceptance claim. Elite Daily reached out to the university for confirmation or comment regarding the suggestion, but did not immediately hear back.

Then there's the case of Jared Kushner, whose acceptance into Harvard University was examined in ProPublica editor Daniel Golden's 2006 book The Price of Admission. According to USA Today, Golden wrote about how Kushner was reportedly only accepted to the school after his father, Charles, pledged a $2.5 million donation to it in 1998. He pointed that this was odd, particularly because Harvard only selected one out of nine applicants at the time, and it was believed that Kushner didn't have good enough grades to make the cut. The White House did not immediately return Elite Daily's request for comment on the college acceptance and donation. According to a Harvard representative, the university does not comment on individual cases or the status of individual gifts.

Oof. I know it's hard to resist weighing in on a trending topic, but this is one Trump Jr. should've maybe sat out.