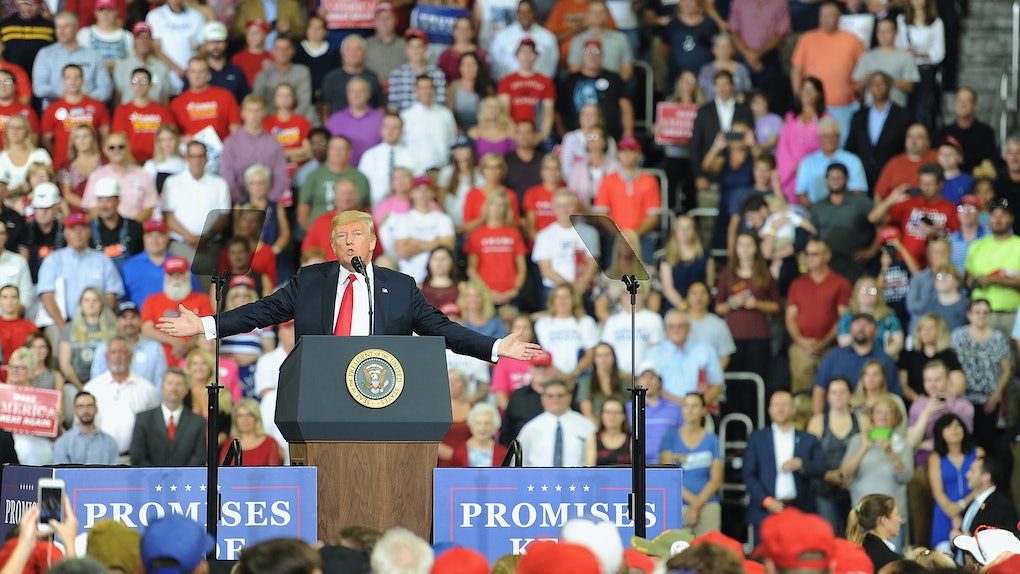 Donald Trump Blamed His Potential Impeachment On Voters, Which, OK

Plenty of Democrats in Congress have long been calling for the impeachment of President Donald Trump. But now, it seems, he's using that as a battle cry to rile up his base. In a rally in Montana on Sept. 6, Donald Trump blamed any potential impeachment on voters, saying it would be their "fault" if he got impeached following the November 2018 midterm election.

"You didn't go out to vote — that's the only way [impeachment] could happen," Trump told his supporters at the rally in Billings, Montana on Thursday night. "You aren't voting for a candidate, you're voting for which party controls Congress. It's a very important thing."

He stressed, however, that he's done nothing as the nation's leader to deserve impeachment, and added that the strength of the economy is proof that he's measuring up to the demands of the office.

"I say, how do you impeach somebody who is doing a great job, hasn't done anything wrong. Our economy is good. How do you do it?" Trump said. "I'll be the only president in history they'll say: 'What a job he's done! By the way, we're impeaching him.'"

If Democrats were given the opportunity to move ahead with impeachment, he told his supporters, it would set a precedent of impeaching an opposing-party president that would set the country on a path to becoming "a third-world country."

Trump backed up his assertion of competence with more claims about the strength of the economy, saying that the unemployment rate and the economy overall (on every measure) were the best they've ever been in the country's history, which, as the Post points out, is not quite true.

He also claimed that he "won by a hell of a margin" in the 2016 election, which is true if you look at the electoral college votes, but is grossly inaccurate when you look at the popular vote, which Clinton won by a landslide. But despite him touting his popularity, the rally on Thursday night was reportedly not well attended.

It's not the first time the president has addressed the "I" word. Trump has made the same warning before, saying that if Democrats take power in the midterms, they'd impeach him. Among the most vocal House Democrats who've been long been talking about impeachment are Reps. Maxine Waters of California and Al Green of Texas.

But the maneuver, some say, could be a fatal one for Democrats hoping to restore their power in 2018 and 2020. Should Trump be removed from office by impeachment, Vice President Mike Pence would take over — a presumably unappealing prospect for many Democrats given his political effectiveness and conservatism.

Instead, some feel that impeachment should only be considered after Mueller's investigation is completed, and Democrats are (presumably) armed with plenty of reason. Moreover, if Trump is removed and the country has even a small speed bump — for example, in the economy — it gives the Republican party a massive card to play in future elections by blaming any hiccups on them. In that way, and in numerous others, impeachment talk is seen as a sort of bait for Democrats, at least for the time being.

It's possible that all this impeachment talk is just riling up his base more. From the footage at the rally on Thursday, it seems that at least some of the president's supporters are egged on by talking about it. Whether the president's talk, though, was just paranoia peeking out, an attempt to weaponize his own vulnerability, or simply riffing as he does, it's anyone's guess — and at this point, all speculation.