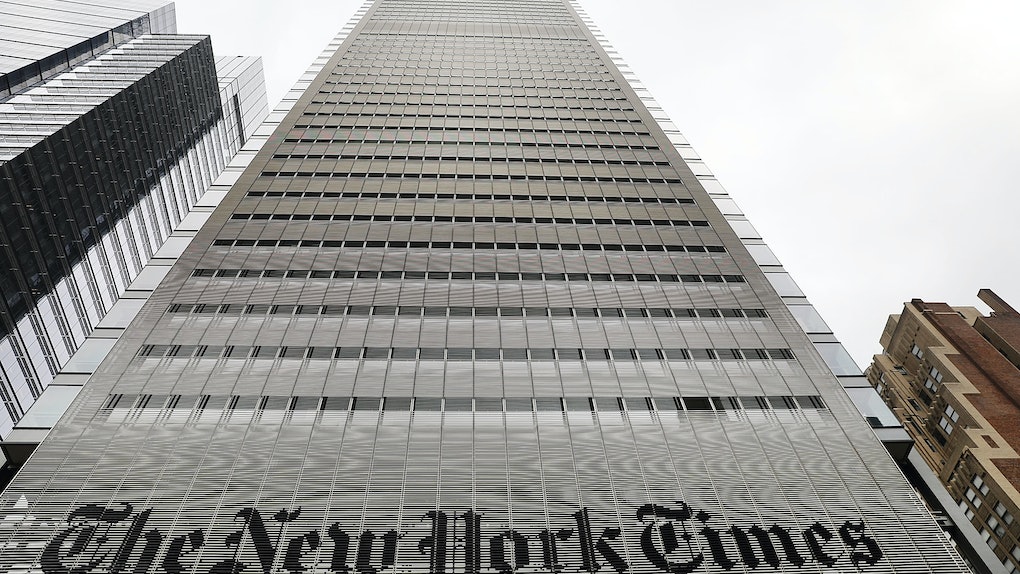 Who Wrote The "Resistance" Op-Ed In 'The New York Times'? These Theories Have Me Thinking

On Wednesday, Sept. 5, The New York Times completely broke the internet when a mysterious op-ed surfaced. In the piece, an anonymous Trump administration staffer revealed that they have been attempting to "thwart" President Donald Trump's presidential plans while working in the White House alongside him. Since the story was released, everyone has been asking who wrote the "resistance" op-ed? Hold on tight, because there are a few theories floating around.

In the op-ed, the Times describes the anonymous author as a "senior official" in the Trump administration, and by taking that information into account the public has made a few guesses as to who it could be. Some claim it's Vice President Mike Pence, while others believe it could be Secretary of State Mike Pompeo, both of whom have denied writing it in statements. However, there's a few other semi-believable theories floating around that have me personally questioning everything. To be honest, I haven't seen people this invested in politics since a Scandal season finale.

Let's start with the man closet to Trump, Vice President Mike Pence. Once the op-ed was published, Twitter started noting the similarities between the piece's language and Mike Pence's previous speeches, particularly how the word "lodestar" was used. On Sept. 5, journalist Dan Bloom took to Twitter to point out the word "lodestar," and noted how Pence has used that word numerous times since 2011. Then, just to add fuel to the conspiracy fire, ShareBlue White House reporter Tommy Christopher shared a 2001 video of Mike Pence in referencing the word "lodestar" eight times during a speech. Obviously Pence is no stranger to the unconventional term.

Despite the theory, Pence's spokesperson, Jarrod Agen, shared a statement via Twitter on Sept. 5 denying that Pence is the author of the op-ed.

While Pence might be the one guess in this mystery, Secretary of State Mike Pompeo is also a potential contender in this political mystery. The former CIA director and current secretary of state has gotten a lot closer to Trump since taking on his new role, and with a fancy new title comes quite a bit of power. So, has Pompeo used his new role as a way to put the Trump administration on blast? On Thursday, Sept. 6 Pompeo spoke to reporters during a trip to New Delhi, India and completely denied claims that he's the author of the op-ed. He said,

It’s not mine. If it’s accurate they should not well have chosen to take a disgruntled, deceptive, bad actor’s word for anything and put it in their newspaper. It’s sad more than anything else. I come from a place where if you’re not in a position to execute the commander’s intent, you have a singular option — that is to leave. And this person instead, according to the New York Times, chose not only to stay but to undermine what President Trump and this administration are trying to do.

Despite the fact that Pence and Pompeo are clearly the most popular guesses to who could have penned the Times piece, I suppose we'll have to lay those theories to rest for now. However, there are plenty more Trump staffer that are on that speculative list. For example, on Sept. 6, Department of Homeland Security (DHS) press secretary Tyler Houlton released a statement denying that Secretary Kirstjen Nielsen is the one who authored the op-ed piece. He said,

Secretary Nielsen is focused on leading the men & women of DHS and protecting the homeland - not writing anonymous & false opinion pieces for the New York Times. These types of political attacks are beneath the Secretary & the Department's mission.

To be honest, there could be any number of disgruntled White House officials who wrote the op-ed. According to CNN, representatives for the secretaries of the Departments of Defense (James Mattis), Treasury (Steve Mnuchin), and Housing and Urban Development (Ben Carson), and the office of Attorney General Jeff Sessions also issued denials that they had written the op-ed. Give it enough time, and we'll probably run through a denial from every high-level member of the administration.

You know how it goes, keep your friends close, but your enemies closer.