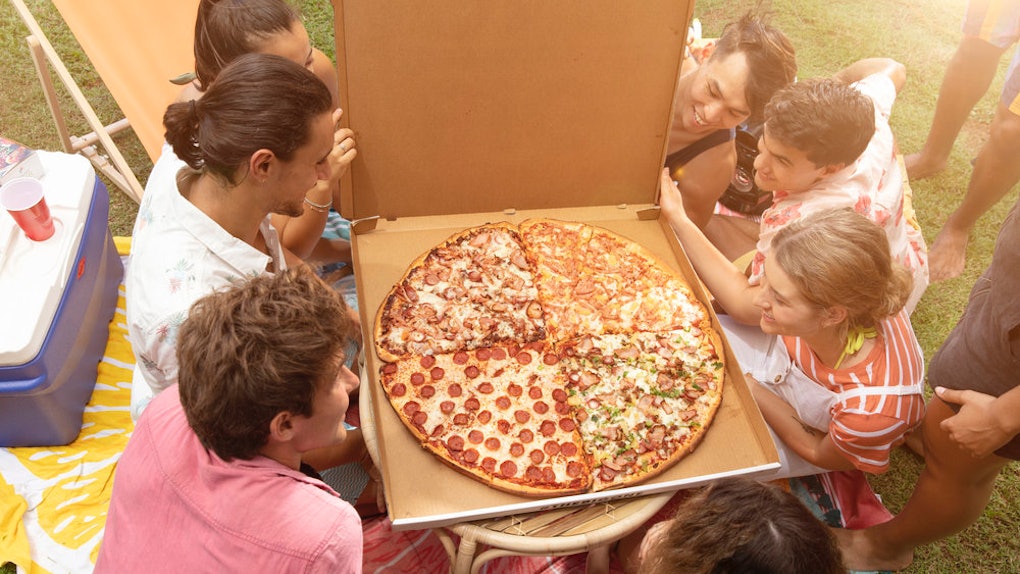 Forget turkey and eggnog, because 'tis the season for all the pizza that your body can handle — that is, if you'll be in Australia anytime soon. Aussies are in the midst of their summer season and pairing sun-kissed skin and sandy shores with the invention of the largest pizza pie you've ever seen, courtesy of Domino's. This 40-inch Domino’s pizza is the chain’s biggest pie with four quarters completely loaded with your favorite toppings, including Hawaiian and Pepperoni. There's more than enough for everyone with 20 servings, and the fact that you get four different kinds of pie in one creation makes this bad boy the ultimate spread for your next party.

On Monday, Dec. 10, Domino's Australia revealed some breaking news that made my pizza loving heart stop in its tracks. The 'za retailer announced that it is rolling out its biggest pie yet in Australia, which it appropriately christened the "BIG ONE," and TBH, I am seriously shook by the details of this cheesy monstrosity.

Per the press release, each pizza comes with 12 slices, but they might be the biggest slices of pizza you've ever seen. Four fully-loaded quarters of Domino’s most popular types of pizza are represented on each pie (Pepperoni, Supreme, BBQ Meatlovers and Hawaiian), which means that wherever your friends fall on the pineapple-on-pizza debate, everyone is bound to be happy. Per the press release, each one of these massive quarters is "roughly equivalent in size to two large pizzas" — a solid 40 inches across, per Delish. In other words, that's a whole lot of pizza, so you're probably going to want to call the crew to help you out with this one.

Before you call in for the super-sized pizza, which is reportedly topped with "800 grams of mouth-watering mozzarella and 600 grams of sauce," there are a few things to keep in mind.

Domino's Global Development Chef Michael Treacy admitted that the giant pie does pose a few practical considerations to keep in mind. "We couldn’t make the pizza any bigger or else it wouldn’t fit through a standard doorway," he said via the press release. "We had to source new, custom made pizza pans and specially-designed pizza boxes, which are much thicker and more robust than our standard boxes, so that they can withstand the weight of the pizza."

Sadly, because of its size, the BIG ONE will not be eligible for delivery.

"The BIG ONE is only available for pick up as it is too large to transport on one of Domino’s electronic bikes," Treacy said in the release. "Customers will need to make sure they bring a friend to help them carry the pizza out of the store and clear the boot [trunk] space in their car, so it can lay flat."

In addition, due to the size, only two of these bad boys will be available per day per Domino's location, so this isn't the best option for an impromptu party. Customers will need to reserve the 20-serving pies 24 hours in advance to prevent them from selling out.

Despite needing to order ahead to get your hands on this pizza, planning to pick up the pie with a friend, and the traveling all the way to Australia, it's actually a really good deal for all the deliciousness you're getting. The BIG ONE retails at just under $50 Australian dollars, which translates to almost $36 stateside. That's about $3 per slice, which makes it a complete steal.

While the BIG ONE is currently only available in Australia, there's one silver lining. According to the press release, Domino's newest pizza size is here to stay for the foreseeable future, so I'd make sure to put it on your bucket list whenever you're next Down Under.