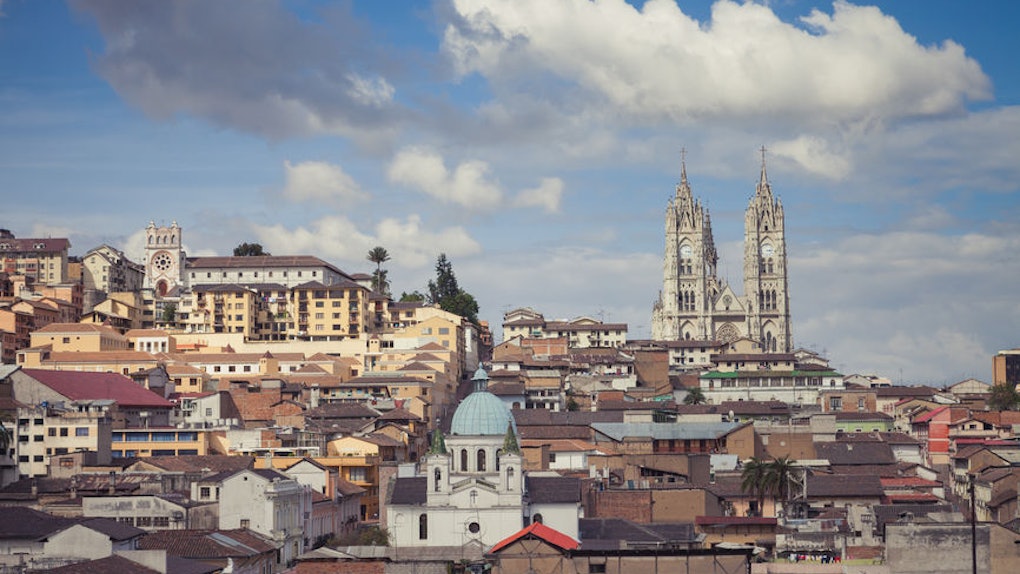 Even though it's only been a few weeks since spring break ended, and summer is right around the corner, I'm already dying to embark on an adventurous getaway. Whether you're looking to head out of town for just a few days or if you're looking to disappear for a full two weeks, there are deals to be had. South America bound? Check out Dollar Flight Club's May 10 flight deals to Ecuador — they'll save you up to $476 on your round-trip flight.

Perhaps you've been dreaming about traveling to Quito, Ecuador for years, or maybe you just came across some gorgeous pics of Cotopaxi National Park. Either way, the time to book your flight is now, because airfare is mad cheap. According to Dollar Flight Club (DFC), there are a lot of deals on flights from some U.S. cities to Quito from May through June 2019 and August 2019 through March 2020. In fact, you could save up to $476 round-trip, per the an email from the flight deals website. According to DFC, flights from the U.S. to the South American country average out to about $850. But if you take a look at DFC's deals, many of them end up costing less than $400.

Luckily, you can book inexpensive flights to Quito, Ecuador from several U.S. cities, according to Dollar Flight Club. If you're flying out of Atlanta, Georgia; Nashville, Tennessee; Jacksonville, Florida; or New Orleans, Louisiana, roundtrip tickets are as as low as $374. Flights from Austin, Texas are a bit more money but still a reasonable $456. Travelers flying out of Charleston, South Carolina can score $530 round-trip flights, and last but not least, $546 flights from Denver, Colorado will give you just over $300 in savings as compared to the regular $850 price tag. Before you wait too long to book, keep in mind that prices are accurate as of publication, and they will likely go up within 24 hours, as per the DFC email. So if you want to score savings, book now, and plan later.

Seriously, Dollar Flight Club makes note on its website that cheap fares like these can disappear within just a few hours, or even a few minutes. Since they don't last too long, the site strongly recommends hopping on this as soon as you possibly can. Take a moment and count up those PTO days and double-check which months your departure city has the cheapest flights, and then book that flight ASAP.

If you do pull the trigger on the cheap flights, definitely make sure to check out the Cotopaxi Volcano, which is located just outside of Quito, per Culture Trip. Located in Cotopaxi National Park, you can apparently get the best views of the active volcano in the Andes Mountains from mid-July through early October. Luckily, DFC's flight deals have some dates within those ranges, so don't forget to "do it for the 'Gram" on your South American getaway.

Traveling can be pricey, so a cheap deal is always warmly welcomed in my book. Saving almost $500 on a round-trip ticket is major, so if you can swing it, brace yourself to explore the city of Quito, Ecuador. Oh, and whether you're traveling solo or going with a pal, definitely don't forget to take some incredible pics. I'm counting on you.