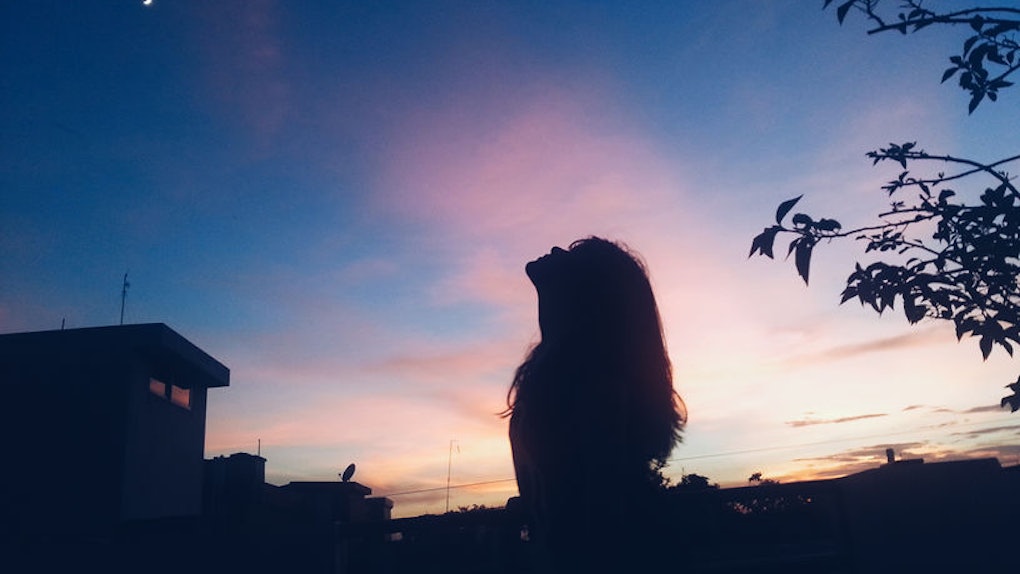 Does The Partial Solar Eclipse Affect Your Mood? Astrologers Say You Might Have Some Intense Feels

Who else has been feeling the intense astrological energy swirling around in the air (and in your soul) as of late? I don't think I'm alone when I say the universe's vibes have been ridiculous ever since summer began. And with a partial solar eclipse happening later this week on Thursday, July 12, things might get even more intense. According to astrologers, the partial solar eclipse may affect your mood in one way or another, despite the fact that you probably won't even be able to see the eclipse with your own eyes.

First of all, if you need a little refresher on what a partial solar eclipse actually is, I've got you: According to TimeAndDate.com, it's when the moon, the sun, and the Earth align imperfectly, which causes the moon to cast only a sliver of its shadow on Earth.

Partial solar eclipses are usually pretty hard to spot with the naked eye, but if you do happen to catch a glimpse, TimeAndDate.com says it'll basically look like the moon took a bite out of the sun. Sounds kind of cute when you think about it that way, right? Well, when you ask astrology expert Jenna Smith, who runs the blog My Stars! Horoscopes, it sounds a little, well, not as cute.

"Eclipses of all kinds affect our moods," Smith tells Elite Daily. "From an astrological viewpoint, I firmly believe that eclipses make us feel differently."

Thursday's partial solar eclipse, according to Smith, is bound to usher in fast changes that may take your breath away with their speed and finality. She jokingly tells me that solar eclipses are like "new moons on steroids," and in fact, she believes you can often feel the energy of an eclipse long before it actually happens: "I believe that the energy of an eclipse starts to build for several weeks ahead of time, and that there are clues or psychic hints that we pick up on that may [tell us] what's to come," Smith tells Elite Daily. See guys, I told you there was a reason why so many of us are feeling out of balance lately. I knew I wasn't sobbing into my bowl of cereal every morning for the past three weeks for nothing.

If you're a bit of a skeptic about all of this, though, and you don't really believe in the idea of a partial solar eclipse affecting you or your body, Smith says there's actually a more scientific standpoint that may explain some of the emotional turbulence that can happen during any kind of solar eclipse. "With a new moon and solar eclipse, the sun and the moon are both pulling on one side of the planet," Smith tells Elite Daily. "Tides are higher than usual when a new moon occurs, something that sailors have known about for thousands of years. Since our bodies are about 65 to 70 percent water, there may be a scientific basis for feeling differently when a new moon occurs."

Smith definitely makes an interesting point here, though it's worth noting that most of the research on the effects of moon phases and tides on people's emotions is inconclusive or requires further study.

Even so, if you're feeling some type of way this week, whether you believe it's related to the partial solar eclipse or not, your emotions are totally valid. If you notice a shift in your mood this week, accept it for what it is, and remind yourself that this, too, shall pass.

To that point, according to Milana Perepyolkina, author of the book Gypsy Energy Secrets, you shouldn't try to fight whatever emotions the partial solar eclipse may stir inside of you.

"Expect to be more emotional and more sensitive, and your health to be more vulnerable," Perepyolkina tells Elite Daily. "You may feel extra tired, your old aches and pains may flare up, and your job will be affected as well." Great! Can't wait! Not.

On a serious note, though, you don't have to sit idly by and let the universe completely take the reigns on your emotions during the partial solar eclipse. According to Perepyolkina, you can prepare for and shield yourself from any chaos or unmanageable mood swings by expecting delays and frustrations in the coming days, and perhaps more importantly, not judging yourself, or anything or anyone else, for what may go wrong.

And as for what you do want to do during this turbulent time? Perepyolkina suggests planning a spiritual practice, meditation, or an easy physical activity — such as a leisurely walk in the park or a restoring yoga session — to keep yourself feeling as calm and as grounded as possible. You've got this, girl. The universe ain't got nothin' on you.

More like this
These 40 Clever Vaccine Selfie Instagram Captions Deserve A Shot On Your Feed
By Rachel Chapman
TXT's Zodiac Signs Prove That Opposites Really Do Attract
By Chelsea Jackson
April 12, 2021 Will Be The Worst Week For These Zodiac Signs
By Roya Backlund
Stay up to date