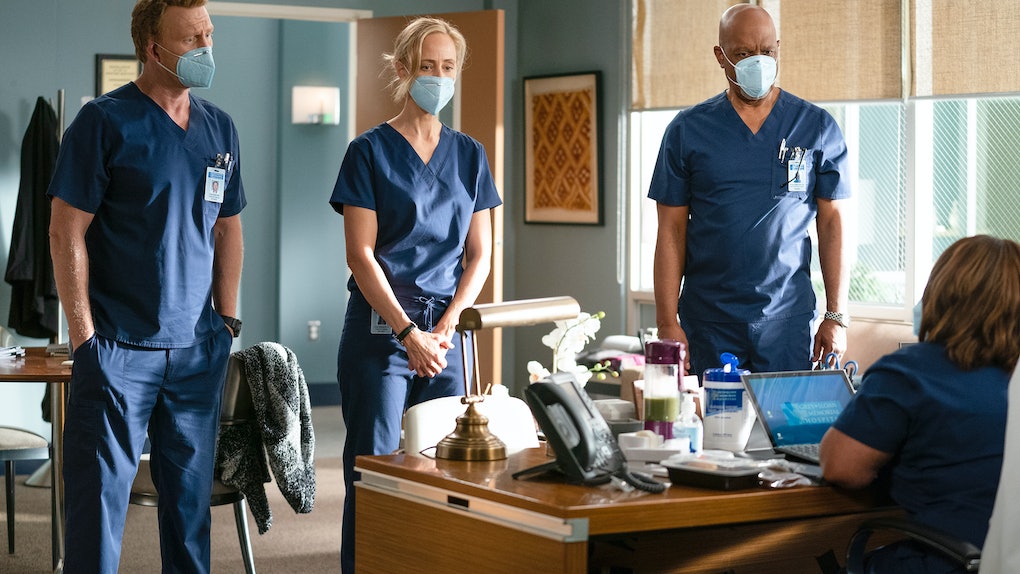 Does Teddy Die In 'Grey's Anatomy' Season 17? Her Hallucinations Could Be A Sign

Teddy Altman has been truly going through it in Season 17. She impulsively cheated on her fiancé Owen Hunt with her ex-boyfriend Tom Koracick on what was supposed to be their wedding day, leading both men to turn their backs on her. Then, she was unable to save fellow doctor Andrew DeLuca's life after he got stabbed, leaving her traumatized. The stress of it all is clearly getting to her, and after that ominous Episode 8 ending, you may be wondering: Does Teddy die in Grey's Anatomy Season 17? Her hallucinations may be giving fans an important hint.

Warning: Spoilers for Grey's Anatomy Season 17, Episode 8 follow. After everything Teddy and the other doctors have been through during the coronavirus pandemic, losing DeLuca seemed to be a tipping point for her. As she continued caring for a comatose Meredith Grey, Teddy began hallucinating the late doctor all over the hospital.

Things got worse at the end of the March 18 episode, when Owen found an unresponsive Teddy sitting on the sidewalk outside the hospital, seemingly completely unaware of the world around her. The promo for Season 17, Episode 9 shows her condition only worsening, as she goes deeper into a seemingly catatonic state.

"The other time I've seen that kind of look, it's in soldiers. And plenty of them never came back," Owen tells Amelia in the clip, as Teddy has visions of herself walking through Grey Sloan Memorial. She hallucinates DeLuca again, asking him, "What if it's not too late?" But the most worrying sign is the apparent hallucination in which she comes face-to-face with a very awake Meredith Grey, who is currently in a COVID-induced coma IRL.

As avid Grey's Anatomy fans know, this isn't the first time a character on the brink of death has had unexpected visions like this. When Meredith was on death's door after nearly drowning way back in Season 3, she dreamt she was reunited with dead characters like Denny and Dylan. Meredith appearing could suggest Teddy's health is in jeopardy just like hers.

Or, Meredith could symbolize Teddy's second chance to save one of her friends (after she ultimately wasn't able to help DeLuca).

As of now, it's unclear what, exactly, is causing Teddy to have these hallucinations. Owen mentioned he'd only seen the look on Teddy's face in soldiers, so could she be suffering from a form of PTSD. She and Owen initially connected when he helped her cope with grief during their military service in Afghanistan, so she could be dealing with a similar situation here.

Working through trauma together was how the couple bonded in the first place, so if Teddy is able to recover from her mysterious condition, maybe healing in the aftermath of DeLuca's death will help the couple work things out once and for all.