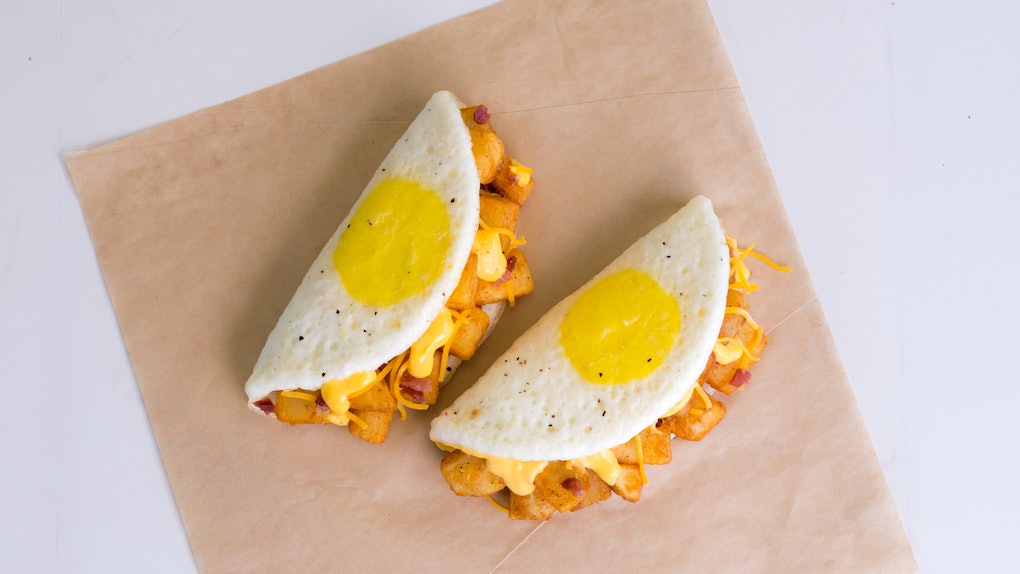 Does Taco Bell Sell The Naked Egg Taco? The Breakfast Treat Is Back With A Great Deal

In the absolutely unfortunate event that you've never enjoyed a morning meal at Taco Bell, I'd just like to send you my upmost condolences. Just a few years ago, the Tex Mex heavens finally answered our prayers and brought us the joy that is Taco Bell breakfast. My eyes were opened to an entirely new breed of morning time eating, and I think a little part of me may have quite literally been reborn. Most importantly, if you remember some of their highlight breakfast creations, you're probably wondering if Taco Bell is selling the Naked Egg Taco once again... and I've confirmed that they totally are, in the best way possible.

OK, I know a taco with a fried egg on the outside might sound a little disorienting, but I swear on my weekend brunch that the Naked Egg Taco will change your damn life. The snack combines all classic breakfast foods, including eggs, bacon or sausage, seasoned potatoes, and a melted medley of cheese, into the form of their signature dish: a taco. And, per a press release sent to Elite Daily by Taco Bell, the Naked Egg is coming back on March 8, for an even better deal than before. For just $3.49, taco lovers will now be able to stuff themselves with not one, but two breakfast tacos at a time, which like, I guess is what dreams are made of. I'm thrilled, seriously.

Per the release, the Naked Egg Taco first entered the (previously dull) lives of taco enthusiasts, just last fall in 2017, when only one went for $1.99 a pop. Since Tex Mex lovers are now getting two for way less than four dollars, this deal is a major steal. The best part is that in the same manner as before, customers can order the Naked Egg as a Gordita Flatbread, if having an egg on the outside of your taco kinda freaks you out. Even though I'm all for an egg on the outside, IDK about you, but I love me some added carbs, all day every day.

Liz Matthews, the Chief of Food Innovation Officer at Taco Bell Corp, said in a statement that since Taco Bell tends to be well known for getting innovative with taco shells, the Naked Egg is key to their breakfast innovations. This, Matthews says, is why they've decided to bring the Naked Egg back, and better than ever. She said,

Fans know us for shell innovations like the Doritos Locos Taco and the Naked Chicken Chalupa, and we’ve also experimented in the breakfast daypart with the release of the Waffle Taco and Biscuit Taco in the past. The return of the Naked Egg Taco at an exceptional value allows us to shake up the ordinary breakfast in a way only we can.

Also according to the release, Taco Bell is going to also be testing a new item, which is called the Breakfast Toasted Cheese Chalupa. Even though I had absolutely no idea what that was, initially, it sounds like the second most important breakfast food to enter my life (the first, obviously being the Naked Egg Taco). Apparently, in a cheese shell, the Breakfast Toasted Cheese Chalupa contains more cheese, eggs, and bacon or sausage, and it's all drizzled in some of that good-good Taco Bell nacho cheese. Wow, that sounds exactly like what I need right here, right now. Since it's just being tested, it's only available for a super limited time in West Virginia at the moment... but like all Taco Bell innovations, it's important to at least have it on my radar. You know?

Editor's note: This article has been updated to reflect that the product is not gluten free.