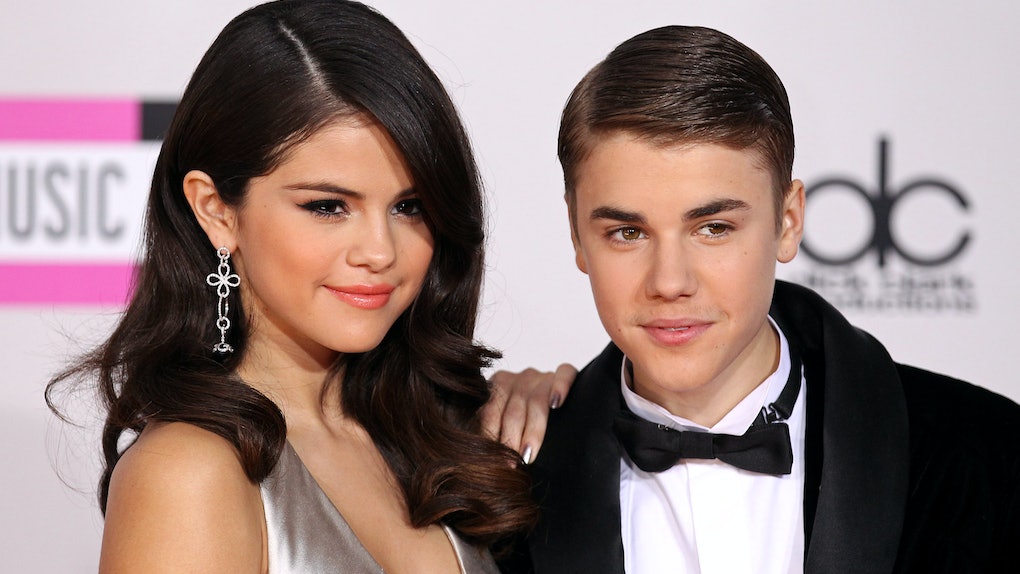 Selena Gomez and The Weeknd are officially over. The pair reportedly called it quits after dating for about 10 months. Sources say distance and conflicting schedules took a big toll on their relationship, and they tried to make things work for a while, but it just wasn't working out. Now, The Weeknd has started unfollowing Gomez's friends and family on Instagram, and Selena Gomez has been seen hanging out with Justin Bieber. While sources say their recent breakfast/church date was platonic, Gomez reportedly might consider getting back together with him. So does Selena Gomez still love Justin Bieber? It might be possible.

Elite Daily reached out to Gomez's and The Weeknd's teams for comment, but did not hear back by time of publication.

Jelena fans have been taking the fact that Selena Gomez and Justin Bieber have been hanging out again as proof they're getting back together. While sources say their recent breakfast and church get-together was just platonic, fans are saying their reunion is inevitable. According to sources close to the exes, Gomez never stopped loving Bieber, although she was really happy with The Weeknd. An insider told Us Weekly,

The ball is in Selena’s court right now. She was happy with The Weeknd but Justin always has the biggest piece of her heart. This situation is a heartstring type of thing. She has to figure out what she wants.

In terms of the Biebs, a separate source told Us Weekly, "Justin really wants to get back with Selena." What?! This is BRAND NEW INFORMATION! Sorry, that was a tad petty. Moving on. The source continued, saying Bieber has been texting Gomez a lot and that she never really fell out of love with him. (They reportedly reconnected after Gomez revealed she had a kidney transplant over the summer.) The source said,

He has been texting her nonstop and hangs out with her whenever he can. Selena insisted that they were just friends and that The Weeknd had nothing to worry about, but she can’t deny that she still loves Justin. He had such a big piece of her heart and was such a huge part of her life for so long. She can’t just let him go.

OK, so I understand our exes can tug at our heartstrings, but Gomez and The Weeknd broke up what, less than a week ago? Unless they broke up months ago and have kept things under wraps for a while (doubtful), I feel like it's possibly, maybe not a good idea to run back to an ex right after breaking up with your boyfriend of almost a year. But, uh, the heart wants what it wants, I guess?

While it might be true that Gomez would consider getting back together with Bieber one day, it looks like she'd actually rather stay single for the time being. A third source told Us Weekly,

I don’t think her mind is on dating again right now. She has no intentions of going right into another relationship. She’s really happy right now and in a good place. But of course, Justin and Selena have a special place in each other’s hearts.

Great! You heal that heart, girl! Self-care post-breakup is the key to getting over heartbreak, not getting back with the ex you dated for three years when you were a teenager. Listen to the wise words of Dua Lipa and just don't pick up that phone, girl. Your fans think you should listen to "New Rules" as well, so this isn't me being pushy!!

Despite Dua Lipa's perfect advice and the claims that Gomez wants to stay single for now, she reportedly is still open to the idea of rekindling things with Bieber as long as it's coming from a consciously thought-out place. According to the initial source,

It’s definitely a possibility that they could get back together. It’ll be a long situation and there won't be a decision made tomorrow, and it’ll be a lot of back and forth, but ultimately, [their] friends think it will end up in that direction.

What? OMG, LOL, how did the "New Rules" music video get here? That is soooo funny! I mean, I guess we should watch it since it's already here, right??!!