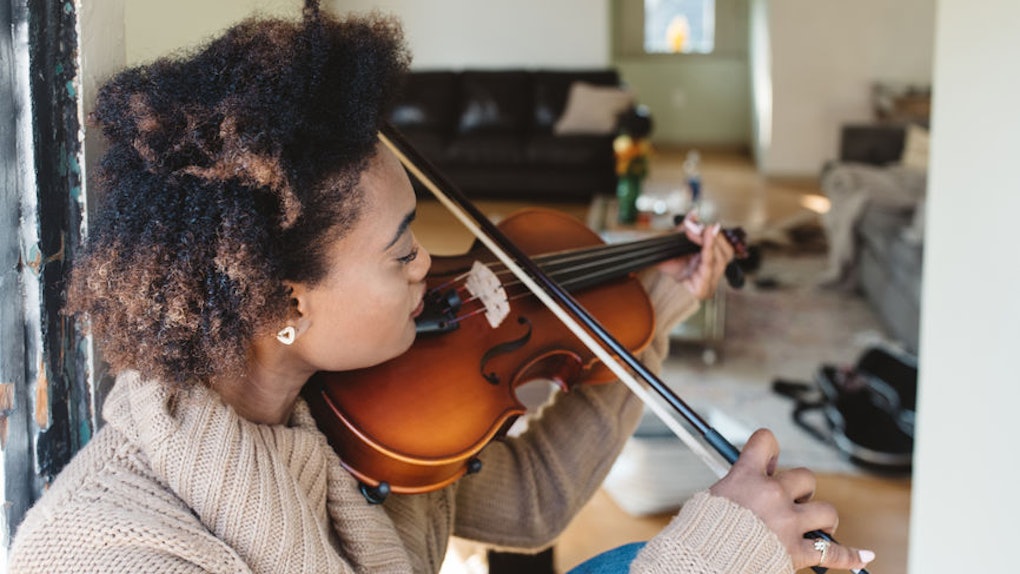 Does Practice Really Make Perfect? Science Says It Doesn't & An Expert Has A Better Alternative

Everyone knows the old adage "practice makes perfect," because it's that kinda annoying thing that people say to you when you're trying to learn a new skill. Whether you're looking to get those piano scales down or learn how to handstand in yoga, general consensus says that doing things over and over again is the pathway to doing something well. But I have often wondered if practice really does make perfect in all situations, or if repetition is sometimes just a recipe for getting tired and frustrated. Well, as it turns out, new research suggests there very well might be a breaking point for all that practice.

The new study comes from researchers at Johns Hopkins University, who found that the muscle fatigue, or overexertion, that happens when you're practicing a new skill can significantly affect how you perform a task that requires said skill in the future — and in fact, that overexertion could negatively affect your ability to learn and further perfect that new skill.

In short, if you keep going and going and going, even when you know deep down that you're totally tuckered out — be it drawing, playing an instrument, or doing a new workout — you might want to listen to your instincts and slow down, because apparently, that exhaustion can present some major setbacks.

For the study, per a press release from eLife, the scientific journal in which the results have been published, researchers recruited 120 people to learn and perform something called a "pinch-force task" over a period of two days. Basically, the participants were given a device to hold in their dominant hand between their thumb and index fingers, and when they pressed the device, the motion sent a signal to a connected computer. Participants were told to press the device with different levels of force in order to control the movement of a cursor on the connected computer's screen.

On the first day of the experiment, a subgroup of the 120 participants was told to pinch until they felt muscle fatigue, while the rest of the participants didn't reach the point of fatigue. On the second day, all of the participants did the pinch task without getting to the point of muscle fatigue, and the researchers found that those who'd experienced fatigue on the first day had a significantly more difficult time performing the task, compared to those who hadn't already reached fatigue. It actually took the fatigued participants two more days of training to catch up to everyone else, which is pretty wild, right?

What's more, the study's results also showed that when the fatigued participants tried to use their unfatigued, non-dominant hand instead to carry out the same task, even with a bit of training, they still didn't perform that well. According to the study's press release, that particular finding seems to suggest that "fatigue impairs motor skill learning mechanisms in the brain," and may even "affect the formation of memories that help people to retain new skills they have learned," as well. In other words, it's not just that you physically get exhausted after practicing your butt off to learn a new skill. Your brain gets pretty tired, too — hence why practice might not necessarily make perfect.

So if practice doesn't always make perfect, then what actually is the best way to learn a new skill? According to Madison McCullough, LCSW, a therapist based in New York, practice is definitely a key part of teaching yourself something new. But instead of practicing until you reach a breaking point, she suggests rewarding your hard work. "The mantra I use with my clients is, 'Practice is hard, and should be rewarded,'" she tells Elite Daily over email. So if, for example, you have a goal to learn sign language, and you successfully set aside an hour to practice one day, make sure you celebrate that hour of your dedicated time and effort. Treat yourself to some gelato, go get a really delicious, latte at that one fancy cafe in your neighborhood, or heck, buy yourself that sweater that's been sitting in your virtual shopping cart for days now.

"We are more likely to continue a behavior (i.e. practice more) when that behavior is positively reinforced," McCullough explains. "Once you set up a clear system for rewarding yourself when you practice, you'll find that you more easily enter into a routine, and that achieving your goal becomes a more fun and enjoyable process."