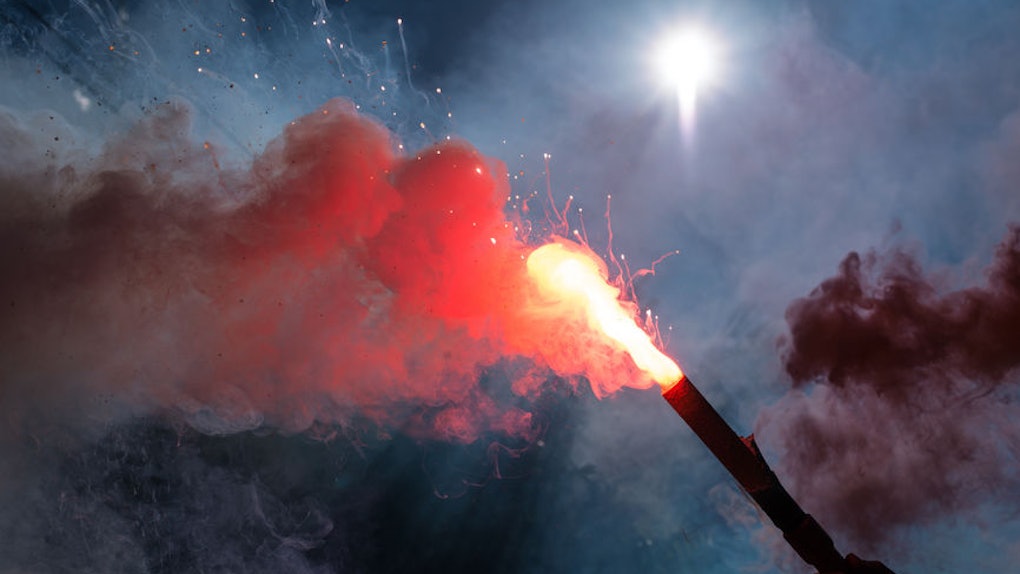 Does Mars Retrograde 2018 Affect Your Mood? Why You Might Be Feeling Irritable Lately

Is it just me, or has getting through this summer felt more like trying to climb out of a sinkhole? I mean, it all makes sense when you think about how seven different planets are in retrograde, including what could possibly be the feistiest planet of all: Mars. Ruling over our raw instincts, carnal aggressions, and the many emotions that make us animal (claw marks, jowls, fangs, and all), the thought of this planet going into retrograde is enough to send shivers down your spine. Although it's been trudging backward since June 26, 2018, Mars Retrograde 2018 might still be affecting your mood, making you super irritable and irked by everything around you. Especially now that it's in Capricorn.

Now, this retrograde did not begin in the sign of Capricorn. It actually began in Aquarius. But as of Aug. 12, Mars has moved so far backwards in its orbit (at least from our perspective on Earth) that it has officially slipped back into Capricorn when ideally, it should have continued onto Pisces.

Generally speaking, Mars retrograde makes us less capable of controlling our anger and breathing through difficult instincts. Because it has shifted from community and collective-oriented Aquarius to ambitious, sneaky, and focused Capricorn, Mars retrograde is about to embrace a whole new level of intensity. Arm yourselves, astro warriors.

As a cardinal Earth sign, Capricorn is known for having their eyes glued to their idea of success. When they know what they want, they will stop at nothing until they've achieved what they set out to achieve. Once they inevitably do, they immediately begin laying down the groundwork for the next goal on their to-do list. Since Mars is essentially the fuel that fires the desire in your soul, you may feel as though none of your plans are panning out the way you expected them to. Naturally, this is cause for a maelstrom of frustration.

Mars was in Capricorn all the way back from Mar. 17, 2018 to May 16, 2018. Do you remember what was on your mind back then? What objectives in life were of main concern to you? Were there obstacles standing in your way? It is said that a planet enters retrograde because there are unresolved things in our past that still need resolving. Now is the time to face these issues once and for all, starting with you.

You May Feel Like Nothing Is Going Your Way

If there's one thing that Capricorn cannot stand, it's when they don't get their way. Now, this is not to say that they're egotistical or selfish by nature. It's more so that they've got such a profound vision for the future that when something threatens it, they immediately go into defense-mode. Their energy is so potent, unique, and misunderstood that, in a Capricorn's mind, it must always be protected. However, the downside here is that it can make it difficult for them to hear constructive criticism.

Since Mars retrograde is now being colored by Capricorn's energy, you might feel even more sensitive to inconveniences than usual. Remember that Mars is what supplies the energy in your core, the energy that propels you to take action. When it's in retrograde, that energy spins aimlessly around the room like a deflating balloon. It's full of life; however, it's also going nowhere.

Keep in mind that everyone's motivation levels are low at the same time as their expectations are high. Everyone wants everything to be big. However, no one wants to do the work that leads up to something big.

Retrogrades are a slow-moving and frustrating time. They're meant to bring us a few steps backward so that, eventually, we can move many steps forward. However, that initial backpedaling is enough to send us all into a panic. You may be wondering why nothing is happening. You may be stressing over your lack of forward movement and your lack of energy. However, consider that maybe, you're not meant to move forward at the moment. Instead, you're meant to overcome something from your past that you never truly overcame, something that you can't move forward without. Go easy on yourselves. Eventually, Mars retrograde will cause something beautiful to click in your mind.