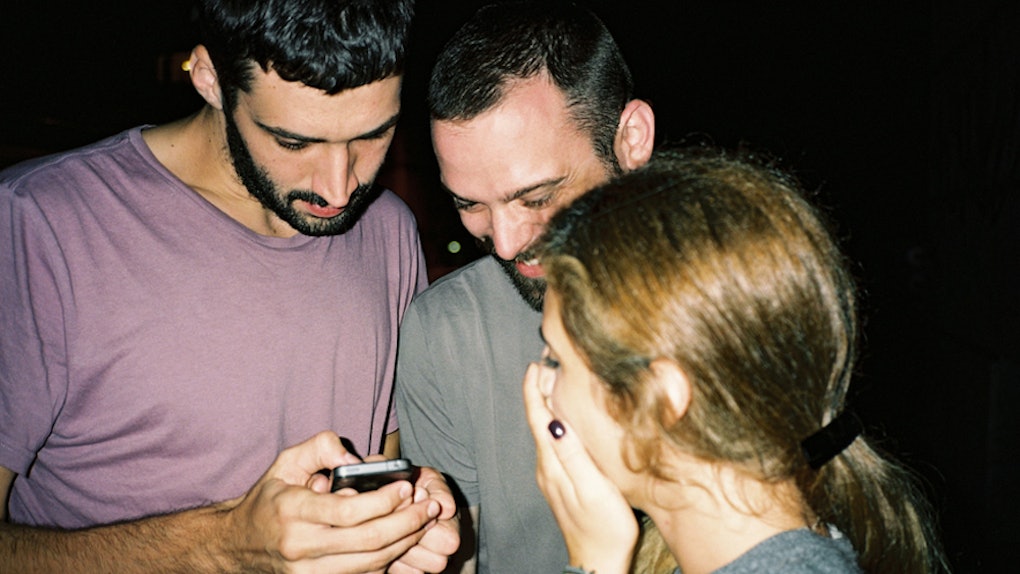 Does Double Texting Ruin A Potential Relationship? Here’s The Truth From Real Guys

Few things are more nerve-wracking than texting a guy you like and not getting a response back right away. You might want to send a second text, but you might also be afraid to have those two awkward text bubbles stacked on top of each other. Here, 11 guys weigh in on what double texting means and whether or not double texting can ruin a potential relationship.

Luckily, most guys agreed: Ain't no shame in that double text game. If you have something to say, say it!

This guy digs the double text.

I have absolutely no problem with double texting and I do it all the time. If someone else does it, then it usually makes me feel better, because it makes me look less desperate!

This person doesn't mind double texts at all.

I generally have the same response as when they text me out of the blue at 2 a.m. on a weekend. Bemused, and not terribly put off. No, that is generally fine with me. I view my phone as a way for people to reach me, and for me to reach them, not as a social obligation going either way. So unless there is the expectation that I get back to someone right away Or Else There Will Be Trouble, I do not really have a problem with it.

This guy isn't a fan... unless he thinks you're too hot for him.

If there's a second text without a response in between, it always seems like they're trying too hard. But sometimes it's flattering — for example, if you think she's out of your league.

This guy actually prefers double texts as a reminder to text you back.

I am the absolute worst at remembering to text someone back, so the reminder is helpful. Like, yeah, sometimes I get irritated when my phone is blowing up, but if I matched with someone or went on a date and they're double texting, then that means something worked.

People should say what they want to say more. In my opinion, if you're not comfortable doing that, you should find someone who makes you comfortable with it.

This guy says double texts are practical when you're planning to hang out.

Back when I was single, [my feelings about double texts] depended on the circumstances. If we had plans coming up, I was not bothered at all because I get the exact way if I'm planning something. But with other circumstances... as long as it wasn't happening every day, I didn't find it to be bothersome. If anything, it shows that they are excited to get to know you more and that is something to be appreciated.

If this guy likes you, double texting is totally fine — at first.

It's not a big deal unless you send like more than 10 texts within an hour. If I like a girl, she could blow up my phone and it wouldn't matter.

But after awhile, double texting gets annoying. My ex was like that. That's kind of why we broke up. She would always blow me up.

This guy points out that the kind of message matters.

If the first message is, 'Hey, it's Rory from Bumble,' an hour goes by, and then she says, 'How's it going?', that's different from following up with, 'I guess you're not the texting type, LOL.' I'd get annoyed if they seem impatient for a reply.

This guy gets annoyed when girls check in.

I think it largely depends what that second message reads. If it's an update or correction (which is unlikely), then it's OK. If it's just a, 'Hey, did you get my message?' kind of inquiry, then I'd find that annoying. My days are very busy and I can't always respond right away.

This guy likes when you acknowledge that you're sending multiple messages.

Assuming I have genuine interest, it's probably not a big deal. But it all depends on the content of the two messages, and the reason for my delay. If they're pressuring me to respond right away, then it's a significant annoyance. If they thought of something fun or new or cool to say in addition to the first message, and it just happened to be an hour later, it's not annoying at all. It's also not annoying if they acknowledge that they're sending multiple messages before I even had the chance to respond. I appreciate acknowledgement of context and the fact that dating can be like a game whose rules shift — the 'meta-dating' of it, I guess you could say.

This guy likes it as long as you're taking initiative.

If they ask me what I’m up to or if I’d like to meet for dinner or drinks, and they follow up an hour later, I don’t think I’d view it as annoying because I like when people take initiative to try and meet up. But to be honest, I would probably respond to that text within an hour because I’m more inclined to respond quicker if we’re making plans. Even if we’re casually texting about nothing in particular, and they follow up, I still wouldn’t be annoyed. But if it’s someone I had never met, and I take a little to respond, and they start following up to the point where it’s incessant, that may raise a red flag.

This guy works at Hinge and knows exactly when to send that second text.

It depends on the circumstances. I'm an engineer at Hinge, and I know that a common reason for no conversation after two people match is that one of them looked closer at the other person's picture and realized they weren't attracted. If I got a double text in that situation, I would just feel the discomfort of being in that situation twice.

From the point of view of the double-texter, you can't actually surmise the reason for a non-reply. Either the other person purposefully didn't reply, and so you have nothing to lose by double texting them. Or they weren't aware of the message. Some people don't check an app every day, so messaging again the next day might be off-putting. Some people see a message and then forget to reply.

Although my research says that three hours and 52 minutes is the inflection point for when a double text is more likely to result in a reply, I'd actually recommend waiting a fair bit longer.

Despite the stigma behind the double text, it turns out that a lot of guys actually love it. So what are you waiting for?