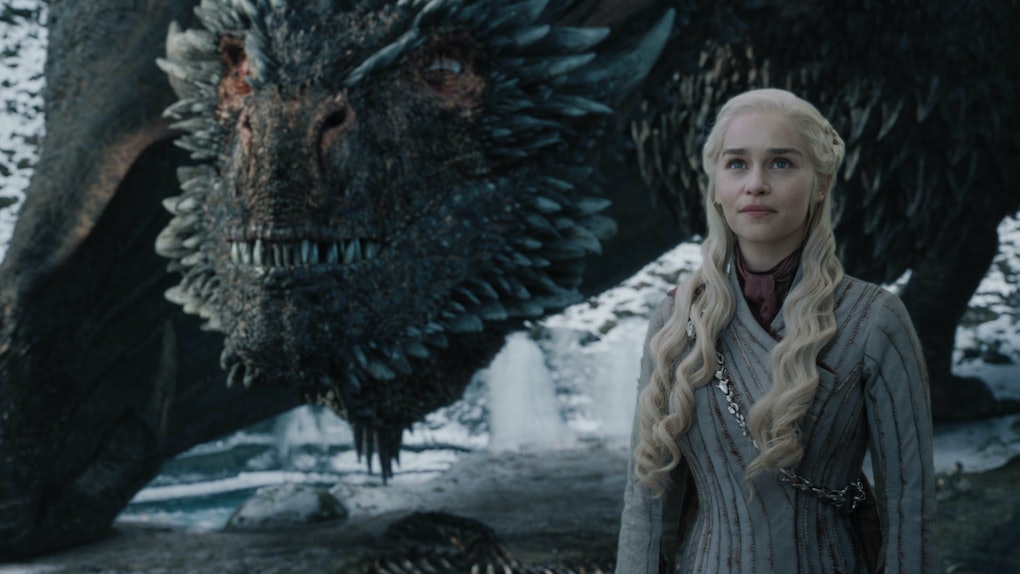 Do More Dragons Exist On 'Game Of Thrones'? It Seems Like There's Only One Left

It finally happened: Daenerys lost the second of her three dragons on Game of Thrones. Once Viserion went down in Season 7, signs began to point to Daenerys' great beasts not being the all-powerful unkillable creatures she believed them to be. Rhaegal had already been wounded during the Battle of Winterfell, seeing him taken down by the Scorpion was a crossbow to the heart. Daenerys is now down to a single dragon. Is it possible for her to find more? Do more dragons exist on Game Of Thrones? It's complicated.

Dragons were initially discovered in Essos around ~8,000 AC, in the caves of a mountain chain known as the Fourteen Flames, sometime after the events of the first Long Night in Westeros. The shepherds who discovered these creatures learned to tame them via magic and used their newfound magical influence and dragon power to establish the Valyrian Freehold, which would go on to become one of the most critical areas of the continent over the next 7,000 years.

In 114 AC, the Doom of Valyria occurred, a massive volcanic eruption that shattered and reshaped the landscape, killing every living thing within dozens of miles of the capital of Valyria, including the dragons. It might have wiped the creatures out too, had not Daenys Targaryen had a vision of the Doom years before, inspiring the family to move bag and baggage to Dragonstone off Westeros with their dragons and a couple of dragon eggs as well.

Those eggs the Targaryens took, by the way, were not the ones Daenerys hatched. Her ancestors hatched and bred dragons all the way through the first 150 years of their reign until the constant captivity took its toll on the creatures and they eventually died out.

As far as anyone knew, dragons were now extinct. There have been some dragon eggs which have floated around since in history, some of which hatched, others of which turned to stone. Targaryens have attempted at one time or another to hatch the "stone" eggs, claiming to be able to feel the heat inside of them. The last Targaryen to do so was Aegon V Targaryen, the legendary "Egg" who was brother to Maester Aemon, in a ceremony which burnt down the castle of Summerhall. Aegon, his grandson Duncan Targaryen and the member of the Kingsguard known as Ser Duncan the Tall were all killed in the fire which did not hatch the egg.

The eggs Daenerys gets at her wedding ae from Illyrio, and supposedly are from someplace far away in Essos, stone fossils basically. Throughout the later novels, after news of Daenerys hatching dragons spreads, others search for famed caches of eggs on Dragonstone and in King's Landing, but nothing ever turns up.

There may be more "turned to stone" dragon eggs out there in the world, perhaps possessed by antique dealers on Essos, who don't believe them to be anything more than decor items. However, there do not seem to be any to be found on Westeros anymore. Moreover, turning them up now, and hatching them, seems a far-fetched notion.

Unless Drogon sudden lays a clutch of eggs out of nowhere, the time of the dragons seems to be coming to an end again.

More like this
This 2021 'Game Of Thrones' Season 8 Trailer Is So Confusing... & So Good
By Ani Bundel
Who Is Lady Bidlow On 'The Nevers'? She's Clearly Not Who She Seems
By Ani Bundel
What Is Kate Hiding In 'Cruel Summer'? There's A Lot To Unpack
By Rachel Varina
Stay up to date