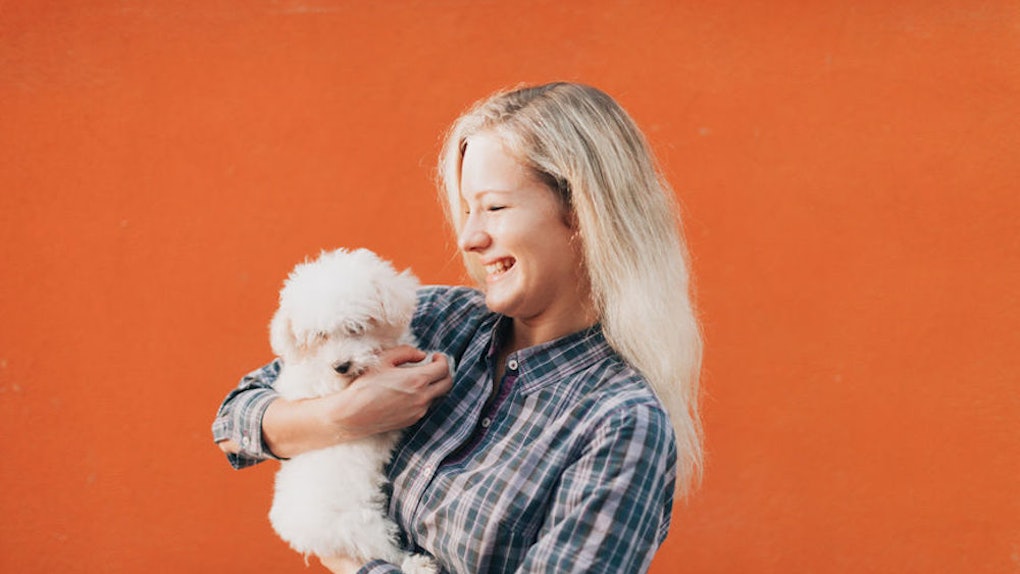 Do Dogs Understand You When You Talk To Them? Science Says Their Communication Is Complicated

It's always been very important to me to tell my pups how amazing they are. Even though my brother insists they have no idea what I'm saying, I always swear they can understand, on some level, the love that I'm trying to communicate to them. And, while I'll admit there's no way to know exactly how much they understand me, according to a new study, I'm definitely not wasting my breath when I tell my dogs how much I love them. If you've ever wondered whether your dog can understand you, I have good news: Keep chatting away, because science says pups actually have a higher capacity for communication than you might think.

In the study, published in the journal Frontiers in Neuroscience, researchers asked 12 dogs and their owners to spend a few months practicing the association between two toys and the the toys' names (i.e. things like "Piggy" or "Monkey"), by asking the dogs to fetch a specific toy, and then having the owners reward their pet with food or praise when they retrieved it.

After a few months of that training, according to ScienceDaily, researchers brought the volunteers and their pups into an experimental setting to test how well the dogs had come to learn which names were associated with which toys. To do this, the researchers had the dogs hop into a brain scanning machine while their respective owners stood in front of them. The owners first held up a toy and said the correct name of the toy out loud to see how their dog would react, and then they held up a neutral object and said a gibberish word like "bobbu" to see what response that elicited from the pups.

According to ScienceDaily, the researchers found that, unlike the way human brains would usually react to trained associations, the dogs' brains showed more activity in response to the unfamiliar words their owners said in the experiment, than the words they'd practiced for months with their owners.

Of course, this might make your pup sound, well, a little dumb. But as per ScienceDaily, the study's authors believed that this might be because the dogs were working extra hard to try to understand their owners' wishes when the owners said the unfamiliar words. Basically, when you say something to your dog that they don't fully understand, they try really hard to please you (yet another reason that all pups are so freaking amazing).

So, while you've probably taught your cute canine to respond accordingly to different words like "sit" or "roll over," you might not have considered using other types of prompts to communicate with your pup. "When people want to teach their dog a trick, they often use a verbal command because that's what we humans prefer," Ashley Prichard, a Ph.D. candidate in Emory's Department of Psychology and first author of the Frontiers in Neuroscience study, said in a statement, as per ScienceDaily. "From the dog's perspective, however, a visual command might be more effective, helping the dog learn the trick faster."

If you aren't quite sure what this might look like, pet-care site The Spruce Pets details a few hand signals you can use to train your dog. For instance, if you want your dog to sit, the outlet explains, "hold your hand palm out next to your body, and then bring the hand up until it's parallel to the floor." I mean, personally, I can't help but gush out loud over my dogs when I talk to them in any context — even when I'm trying to teach them something — but I guess this is worth a shot.

Plus, what's even more interesting about this is that, while you might think it's the way you say certain things, rather than what you actually say, that your pet picks up on, science says that probably isn't entirely true. Although saying "you're a bad dog" in a super happy voice might trick your pup (although that's totally mean, IMO), there's some reason to believe they actually, to some extent, understand the words you're saying, according to a study of 13 dogs by a team of researchers from Eotvos Lorand University. “We showed dogs praise words and non-praise words, in both praising and non-praising intonation," lead researcher Attila Andics, of the Department of Ethology, told Reuters, "and we found that dogs just like humans can separately process word meaning information ... in the speech signal and intonational information."

In fact, a study published in the scientific journal Animal Cognition found that, much like what happens when you chat with a baby, having conversations with your dog not only improves their attention, it also strengthens the bond between the two of you. So don't worry about chatting away with your canine pal, because if anyone teases you, you have science on your side.