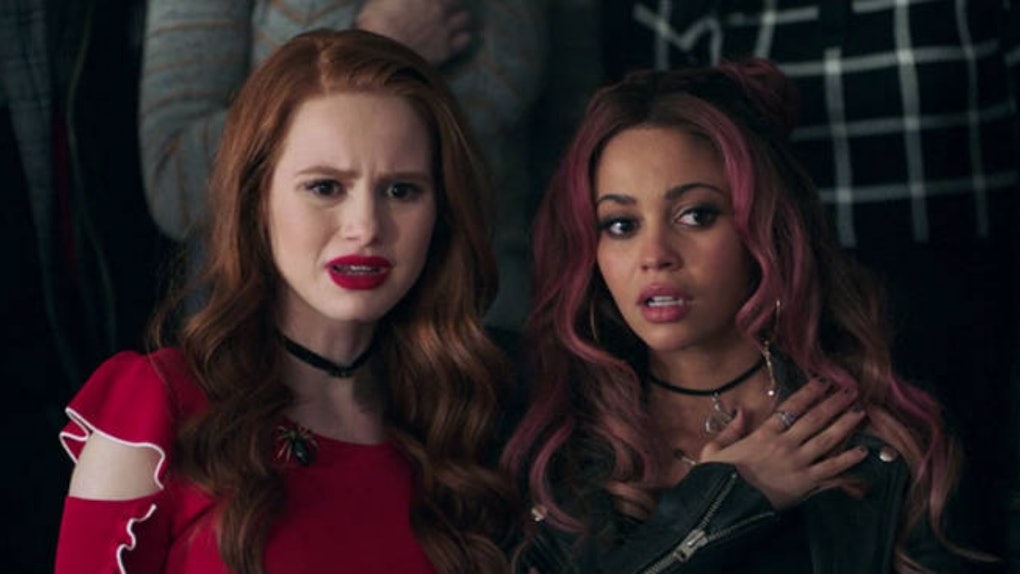 High school relationships are often tumultuous, but ahead of Season 4 of Riverdale, the teen couples are seemingly in strong stages. However, that may not be the case for Cheryl and Toni as new episodes begin in October. After actor Madelaine Petsch's recent comments, Riverdale's fans have one big question: Do Cheryl and Toni break up in Riverdale Season 4? Choni shippers may have a reason to worry.

Toward the end of Riverdale Season 3, the town was looking a little bleak. Cheryl (Petsch) and Toni (Vanessa Morgan) may had been together, but the elements were certainly stacking against them. After being captured in her attempt to save Toni from the Farm harvesting her organs, Cheryl escaped and brought home the dead body of her brother Jason (Trevor Stines). Unbeknownst to Toni, the body is still in the Blossom house, and this kind of secret remaining undercover may be the catalyst to trouble between Toni and Cheryl.

“There may be some trouble in the waters,” Petsch told Cosmopolitan. “I mean, Cheryl’s keeping her brother’s dead body in her basement, which is, like, a fairly large secret. If and when Toni finds that out, it might cause some difficulty ... It’s a very sensitive topic. Can you imagine being like, ‘Hey, you need to bury your brother, he probably smells and I have questions about how he hasn’t decomposed yet.’”

Having secrets definitely leads to no good, but like the other couples on the show, Cheryl and Toni may have a strong chance of reconciling after they possibly hit a bumpy patch. Petsch hinted the couple will be together for a "super cute" couple's costume this Halloween, and as explored in Season 3, Cheryl and Toni's college plans may also intersect. While she didn't comment about Cheryl and Toni's romance beyond high school, Petsch did have thoughts on Cheryl's professional future.

"I can see Cheryl being a fantastic lawyer," she said. "I feel like that kind of seems like the right direction. Or she might take over the family business ... Like, are they a maple farm? Are they drug dealers? Who knows? She’ll take it over and figure it out."

Fans may have to hold their breath about Choni's fate, but the Season 3 finale cliffhanger teased a dark chapter toward the end of the gang's senior year. Flashing forward to spring break, the finale showed Archie (KJ Apa), Betty (Lili Reinhart), and Veronica (Camila Mendes) soaked in blood as they surrounded a bonfire. The group discussed burning their clothes and never speaking of that night again, and then Archie tossed Jughead's (Cole Sprouse) beanie into the fire. It looks like Cheryl won't be the only one with massive secrets for long.

It's unclear when in time the Season 4 premiere will begin, but the creative team has confirmed that the first episode will include a tribute to Riverdale actor Luke Perry, who died in March 2019 after suffering a stroke. Get ready to shed some tears before the teens' deadly drama is in full swing.

More like this
When Will 'Riverdale' Season 5 Return In 2021? Its Mid-Season Break Is Long AF
By Rachel Varina
These Clues 'Grey's Anatomy' Is Ending With Season 17 Will Break Your Heart
By Abby Monteil
Will June Go To Canada With Moira On 'The Handmaid's Tale'? She May Be Saved
By Ani Bundel
Stay up to date