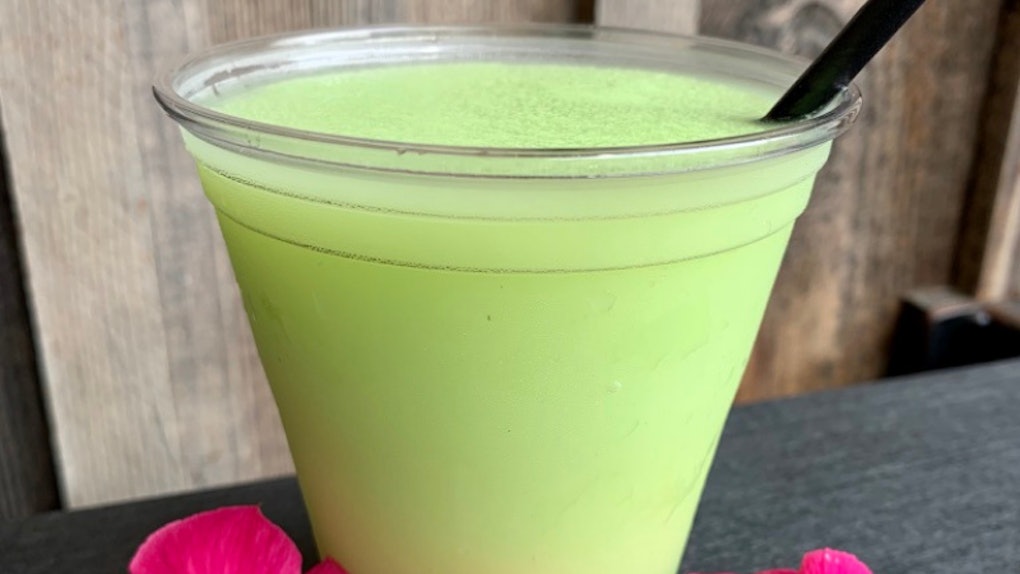 IMHO, one of the best things about visiting Disney parks as an adult is being able to partake in all the inventive boozy sips and bites while exploring the rides and attractions you know and love from your childhood. Now, getting a buzz during your next trip to the Magic Kingdom is about to get even sweeter, thanks to a new sip that combines everyone's favorite theme park treat with the frozen drank of the summer. Disney's new Friezling with Dole Whip Lime is a tangy twist on your go-to frosé, and it's now being served at Disney Springs' waterhole Wine Bar George.

Dole Whip lovers can rejoice, because the new buzz-inducing twist on Lime Dole Whip is currently on tap at Disney World, a Disney rep confirmed to Elite Daily on Tuesday, Aug. 20. According to the rep, the new Friezling made with Dole Whip Lime contain the "perfect blend" of Selbach Riesling, Vodka and Lime Dole Whip, which makes it sound like you'll be treating your tastebuds to a slightly tangier, less sweet version of the Frosé you're probably used to ordering during the warmer months. Per press materials, the newest frozen offering is currently available inside Wine Bar George at Disney Springs in Orlando, Florida, as well as at The Basket for $13, so it's up to you whether you decide to stop in to take a breather from the rides and long lines or you bring your sips to-go while walking through the park.

If you have yet to visit Wine Bar George, you're definitely missing out. The Disney Springs-based space has previously gifted Magic Kingdom visitors spirit-forward gems like the Frozcato Sugar Cookie Sandwich, which is basically the boozy ice cream cookie sandwich you didn't know you needed in your life. In a nutshell, this bad boy includes two sugar-dusted cookies that are filled with a blend of frozen Moscato wine, vodka, and pineapple Dole Whip, and something tells me that it would pair pretty well with this new limey Friezling. If complementing a sweet dessert with a tangy refreshment is not really your thing, you can also choose another option from the retailer's extensive $13 frozen drink menu, which also includes a Frosé with hints of strawberry, a Freaujolais (basically a frozen version of a fruity Beaujolais wine paired with vodka and raspberry), and a Frozcato made with Dole Whip Pineapple. All of these sips come with the option to be served in a re-usable Corksickle, which costs $35 including your frozen drink.

If you want to take any of these frozen sips up a notch, you also have the option to add Prosecco for just $2 more, so cheers to what's sure to be a lit day at the park.

Personally, I'm pretty excited that the restaurant is now offering its very first Lime Dole Whip-infused libation before the end of patio season, so I'd make sure to check it out on your next visit. According to the Disney rep, "there is no set end date for the Friezling," so there's definitely a chance that you'll be able to bring those summer vibes into fall as the season comes to a close.